After several iterations of an offer that was more than once rescinded, Union County officials voted Wednesday to accept new voting equipment from the state at almost no cost to the county.

The Union County Quorum Court held a special meeting Wednesday where Kelly Boyd, chief deputy with the Arkansas Secretary of State’s office, and representatives from each town in Union County attended to discuss the issue of new voting machines and address any concerns. 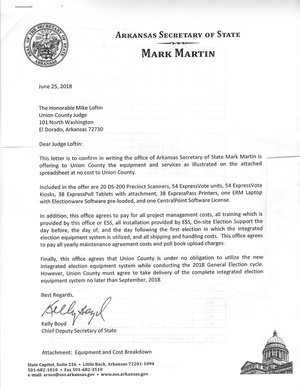 The issue began in May, when the state offered to purchase half the cost of new voting machines for the county. The offer was rescinded after Boyd expressed frustration at comments made by a Union County official to the News-Times concerning reported issues with the equipment being offered. Boyd then offered the equipment again on June 6 with the state willing to pay 100 percent of the cost. The total cost for the new machines for Union County would be around $440,000, using Election System and Software (ESS).

But Boyd then rescinded the offer once more, only to have Justice Dean Storey report at last week’s Quorum Court meeting that it was still “on the table.”

Ultimately, the quorum voted 8-2 to table the discussion until they could get some questions answered.

“I wanted to meet with all of you face to face,” Boyd said Wednesday. “I created a controversy and I did not mean to. Please accept my apology.”

Boyd said he rescinded the offer because he didn’t want Union County to feel obligated to purchase the equipment.

Boyd also said the office has enough money to pay the equivalent for Union County and one other county in Arkansas. He said the reason Union County is first on the list is because the state paid 100 percent for Columbia County and Ouachita County, and all three southern Arkansas counties were using a different type of equipment.

“We’re not doing that for other people, but we will do it for Union County because we did it for Columbia and because we did it for Ouachita and the three of you were in the same set of circumstances,” Boyd said. “If Union County elects to stay where you are right now, which is fine, I’ll put that money somewhere else. I do have three or four other counties that will accept the offer, but you’re first on the list.”

Quorum Court members asked questions about whether the Secretary of State election in November would affect plans for voting equipment, as the current office holder is term-limited and not able to run again.

Boyd said the chances of a new secretary of state changing the equipment “is zero.” He noted that the next office holder can select additional vendors, “but I cannot see a situation in the world where the next secretary of state, as hard as a time that we’ve had raising money, would elect to go with all new equipment in the state.”

He said he has 52 signed contracts with counties in Arkansas.

“I do believe that the entire state of Arkansas will be voting on equipment like this by 2020, or have the opportunity to,” Boyd said.

In a letter from Boyd written to Union County Judge Mike Loftin on Monday, Boyd stated that Union County is under no obligation to use the new integrated election equipment system in the 2018 general election. But, he wrote, the county must take the new equipment by September.

Loftin said he had no problem getting the equipment, noting the county had available storage.

Justice Johnny Burson asked Boyd about the concern of having wireless internet at poll locations.

“Every day, ESS will upload all of the poll books electronically in the County Clerk’s office with the same voter data,” Boyd said. “Poll books are used at every location, but they do not have to be hooked to the internet.”

Boyd also went through the voting process step-by-step, clearing up any confusion and answering questions on that issue.

Boyd said the state would pay for the voting machines, 54 ExpressVote units, as well as 20 DS-200 Precinct Scanners, 38 ExpressPoll tablets with attachments and other equipment.

In addition to the equipment, the state agreed to pay for all project management costs, training to be provided by the state or ESS, installation costs, on-site election support the day before, the day of and the day following the first election and all shipping and handling costs. The state also agreed to pay all yearly maintenance agreement costs and poll book upload charges.

Essentially, the only cost the county would have to make is purchasing ballots, which would be purchased from ESS, Boyd said.

Justice Cliff Preston said that after reading the agreement letter and listening to Boyd address the quorum’s concerns, “I don’t know why we wouldn’t accept almost half a million dollars in assets to the county.”

“The fact that we get to chose when, how and what we get to do with (the equipment), I think it is a plus and I don’t know if we can turn down that much value to the county,” Preston said.

Storey made a motion to accept the offer from the state, which was unanimously approved by the quorum, 7-0.

Justices Will Crowder, Carolyn Jones, Justin Hendrix and Ross Burton were not present at Wednesday’s meeting.