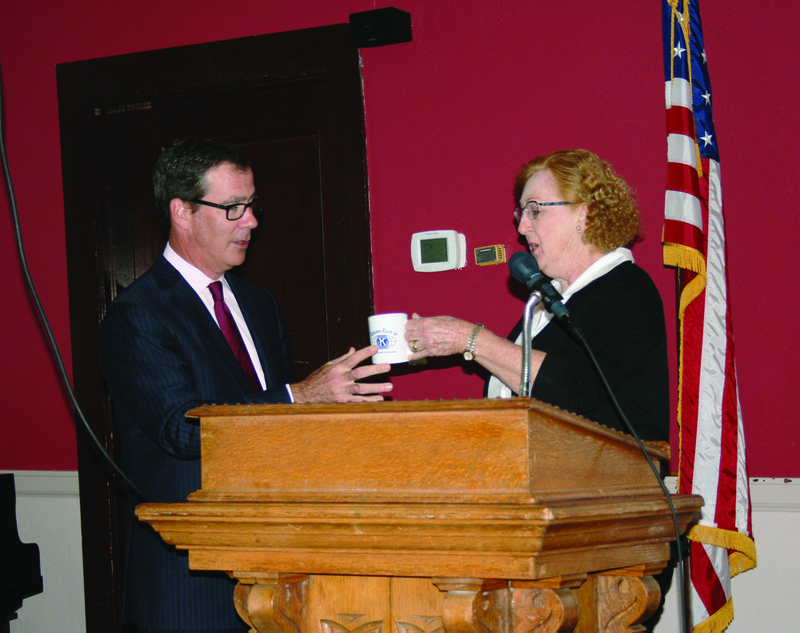 Guest speaker: President and CEO of Murphy USA Andrew Clyde was the guest speaker at the Kiwanis Club meeting Wednesday. Clyde discussed three categories in which he has recently received many questions concerning Murphy's relationship with Walmart, consolidation and electric vehicles.

President and CEO of Murphy USA Andrew Clyde touched on three categories in which he has received many questions recently at the Kiwanis Club meeting Wednesday.

Walmart and Murphy’s relationship has raised many questions for the public company. In 2016, Murphy USA announced that they would be building their own standalone stores and not buying further property from Walmart.

“Then, we also announced that we were going to buy back $500 million dollars worth of our stock,” Clyde said. “That was about 20 percent of our company’s stock, which we’ve largely completed.”

Clyde also said that Walmart announced last week that for the United States as a whole they would only be building 25 new stores in 2019.

Walmart will be focusing on international markets as well as their online business.

“I can see in El Dorado and in other markets, they have done the things they said they were going to do and executed them well,” Clyde said. “And we’ve been reimaging and remodeling a number of our stores as well.”

Murphy USA is still a major partner with Walmart, with about 1,100 of their 1,400 stores being located at a Walmart.

gasoline convenience retailing and the amount of consolidation currently happening. He used 711 as an example, stating that they have been very active in buying other companies.

Clyde said Murphy USA has no plans in getting involved with the consolidation trend.

Murphy USA’s model is based on building their own stores, growing organically at a modest number every year, Clyde said.

The third question Clyde touched on was the topic of electric cars and what the future of gasoline holds.

Clyde said he hired a consultant who put together a presentation concerning electric vehicles, which he presented to the Kiwanis Club members.

He talked about fuel demand and how electric cars may become popular in the long run, but the research he presented talked about the next 10 years, concluding that there is nothing to worry about.

“You don’t have to worry. We’re not going to be going away any time soon in terms of Murphy USA or selling gasoline,” Clyde said. “I feel pretty good about fuel demand. Especially in the Murphy USA states.”