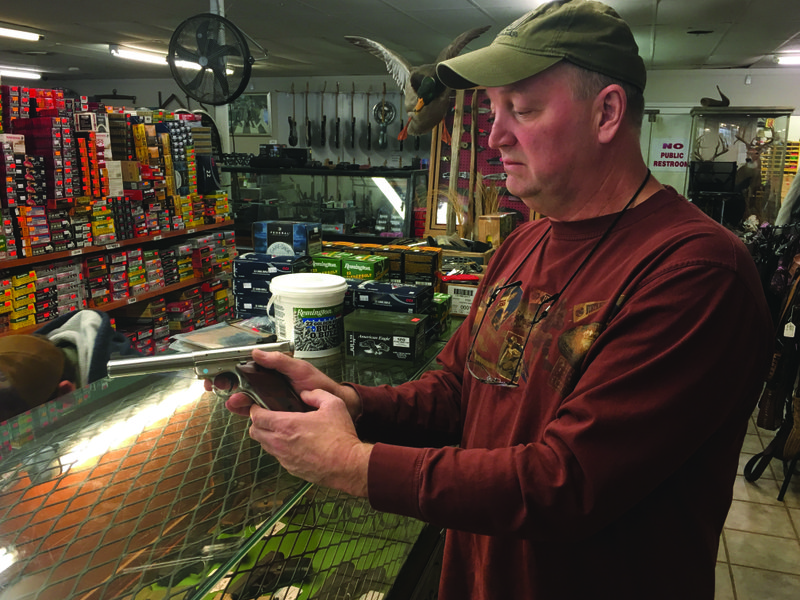 A proposed bill in the Arkansas State Legislature with the potential to allow the concealed and open carry of a handgun without a permit is a more divisive issue for gun owners than most might think. The bill is scheduled for discussion during the senate judiciary committee on Tuesday, March 7.

El Dorado native and freshman State Senator Trent Garner (R-27th District) spearheaded Senate Bill 444 supporting what people know as constitutional carry, a movement sweeping the nation for non-permit open and concealed carry of a handgun as suggested by the second amendment: “…the right of the people to keep and bear arms, shall not be infringed.”

In addition to the discrepancy mentioned in the U.S. Constitution, proponents of non-permit carry argued that there are too many confusing laws and registration paperwork for gun-carrying citizens, and if criminals and reckless people are already in possession of a handgun in public, then law-abiding citizens should be able to as well, Garner said.

Some argue that Arkansas is already somewhat of a constitutional carry state.

In 2015, Attorney General Leslie Rutledge interpreted Act 746, passed in 2013, to allow people in Arkansas to openly carry a handgun with a few caveats: law officers can ask the user’s intent of the weapon, carrying a weapon is not allowed in restricted areas — government building, public university, etc., private property owners have authority over whether people can openly carry a weapon and the law doesn’t affect concealed carry statutes.

Arkansas isn’t the only state considering the move for constitutional carry. Other similar bills are being considered in 14 other states including: Texas, Oklahoma, Alabama, Georgia, and South Carolina, to name a few.

As of late, Garner’s proposal is empty, but the idea of what it could lead to has been polarizing for gun-owning citizens of El Dorado spanning from law-enforcement and gun shop employees to average gun-owners and the rest of the state. But, each stance agreed that a knowledge of gun safety and the state law is required for every gun-owner, even if it’s not mandatory.

Combs teaches classes for people interested in obtaining a concealed carry license, and has seen some local gun-owners who have carried a handgun without a license or permit.

“This is the state of Arkansas, I’ve seen people who carry a gun concealed and say ‘I don’t need a permit, I’ve handled a gun my whole life’ and they can — unless they get stopped by the police, then they’re in trouble,” Combs said.

“It’s a bad idea,” Farley said. “The major problem is people need to know when it’s not okay to carry a weapon. I have no problem with people carrying a weapon, but they need to be educated, which a license guarantees.”

For concealed-carry certification in the state of Arkansas a person is required to take a 5-hour class where the instructor must stress liability and safety, show how to load and discharge a gun, read the state and federal gun laws in a coherent manner, and make sure the person is competent in handling a gun through a “live-fire” test.

Once training is completed, a questionnaire covering a person’s mental health, drug, alcohol, and criminal history is filled and submitted to the Arkansas State Police, at which point officials can grant or repeal a person from obtaining a license to carry a concealed handgun.

Open carry has no strings attached.

“To me, I don’t like open carry because there’s no regulations or class required,” said Ricky Roberts, Union County Sheriff. “With concealed carry, dispatch can run your name through the system and know whether you have a license to be carrying a weapon or not.”

Also, law enforcement officers are restricted to a certain extent when confronting people who openly carry a handgun, for instance: the officer can ask for that person’s intent and if the officer believes it’s for self-defense and hasn’t seen any suspicious activity, the officers move on. This can be a slippery slope, Farley said.

“If you carry openly, an officer has the right to ask if it’s for self defense use, and once that’s done he walks away, that’s all that police can do,” he said.

A large concern for gun-owners is that laws aren’t strict enough on criminals or mentally-ill persons, and until those laws are enforced law-abiding citizens should have easier access to owning a gun for self-defense, said Linda Newbury, mayor of Felsenthal.

Regarding Garner’s proposal she said “I wouldn’t oppose it. My personal belief is that the Constitution is the only permit I need to say whether I can or cannot carry a gun, but if the state law says otherwise, I’m going to abide by the law. Then again we have such confusing laws, I think a clarification should be in order.”

David Yarbrough, owner of Big Bucks Pawn & Gun, said he is also in favor of non-permit carry of an open or concealed weapon, but people carrying a weapon on their side have to be educated.

“If you’re carrying it on your side that’s a big responsibility,” he said. “I don’t feel comfortable with some people openly carrying a gun because you make yourself a target and it doesn’t take much for someone to knock you on the back of the head and disarm you.”

Also, for a law-abiding citizen to carry a concealed weapon, one has to purchase a gun, pay the training fee and pay the state license fee of $150.

And neither does Garner. He said if there’s already a background check done before purchasing a firearm, then gun-owners “won’t have to pay a fee to the state.”

Until the bill is fleshed out Arkansans can’t give a true account of whether they’re in favor or against SB-444, but while some gun-owners are in favor of what Garner’s proposal could do, others are skeptical about what carrying a weapon without a license or permit would accomplish.

“Why try to fix something when nothing’s broke?” Farley said. “You’ve got more people educated living in the state of Arkansas; do we really want to go back to the John Wayne days?”