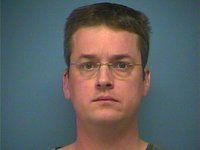 EL DORADO — A former Union County sheriff’s deputy has been indicted by a federal grand jury on two counts of child pornography charges.

Crain, 37, was arrested on June 7 for access with intent to view child pornography and the receipt of child pornography in an investigation that is being conducted by the Arkansas State Police and Homeland Security.

Crain is being held in the Saline County Jail.

In the federal indictment that was filed on June 22 in U.S. District Court, Crain is alleged to have “knowingly accessed a computer connection to the (Internet) with the intent to view material which contains an image of child pornography …” on or about March 3 and continuing through May 26.

Count two of the indictment charges Crain of knowingly receiving a visual depiction that “involved the use of a minor in sexually explicit conduct” on or about March 3.

The visual depiction is described as a JPEG file in the court documents.

The indictment contains a forfeiture allegation, which would Crain to forfeit to the U.S. government any property that was used in the commission of the alleged offenses.

Specifically listed in the indictment are three laptop computers, a notebook computer and two cellular phones.

Crain was a sergeant with the Union County Sheriff’s Office, where he had worked for nearly a year and a half.

Prior to working for the sheriff’s office, Crain was an officer with the El Dorado Police Department.

Sheriff Mike McGough said Crain was terminated from his position in the UCSO after the sheriff learned of the investigation a week before Crain’s arrest.