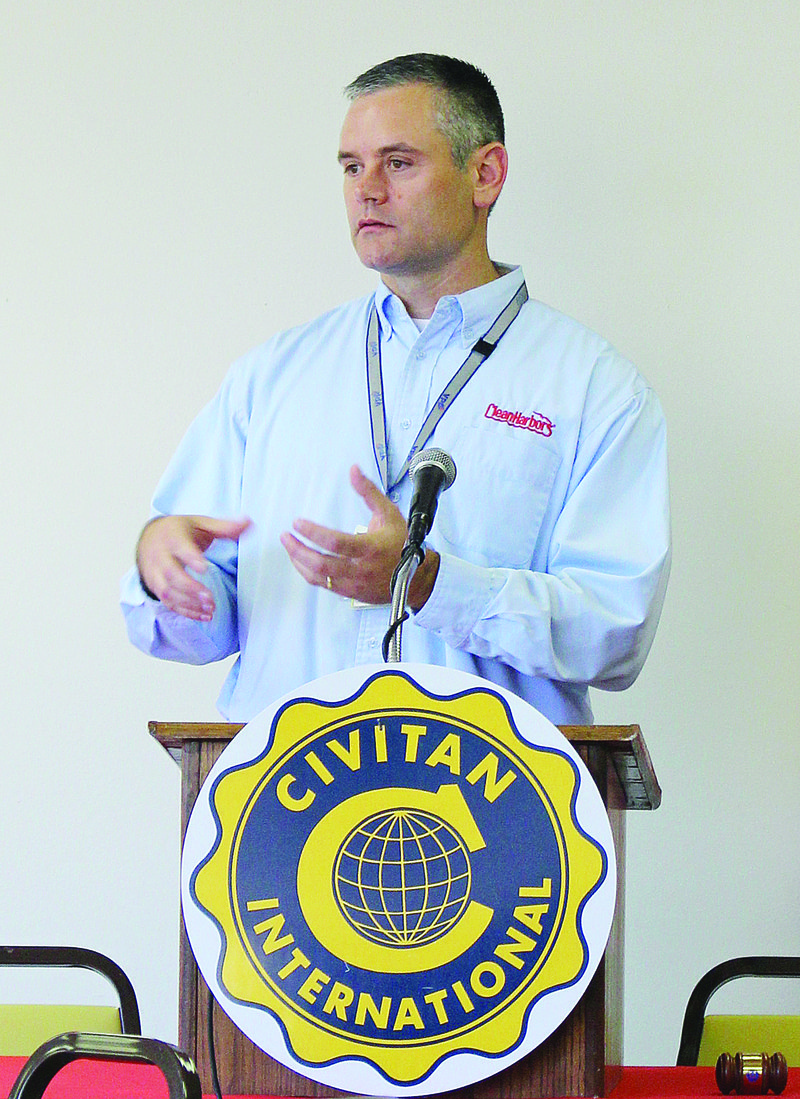 Great changes are coming to the 370-acre Clean Harbors El Dorado facility that sits just outside El Dorado’s city limits on the old American Oil property, said Dan Roblee, the facility’s general manager. “It’s a blessing to be in El Dorado,” he began. “There’s so many good things going on.”

Roblee detailed Clean Harbors current operations as well as the upcoming completion of their expansion and the additional staffing needed during the Civitan Club’s weekly meeting on Thursday at Immanuel Baptist Church.

“A lot of people have been in the community for a long time but maybe don’t know exactly what we do out there,” he said. Roblee, a native of New York, has been with Clean Harbors for twenty years, the past ten of which has been spent at the El Dorado facility. “We’re a lot larger than just El Dorado,” he said. The company has facilities throughout the United States, Canada, Mexico, and Puerto Rico which collectively employ over 12,000 employees.

The primary function of the El Dorado facility is to incinerate materials said Roblee. The high temperature facility incinerates various items such as product returns, aerosols, chemicals, manufacturing byproducts, and household waste, such as paints, pesticides, and fertilizers. Currently, the plant has a capacity of 90,000 tons of materials a year but following the expansion, the amount will dramatically increase to 160,000 tons per year. Clean Harbors El Dorado is currently the largest drum handler in the United States.

Roblee said that the facility does have other functions besides just incineration. “That’s our primary business but we do have other things we do out there,” he said. Solvent recovery and bulb recycling, as well as metal recycling and recovery from Incin Ash are all offered at the El Dorado plant. He advised that there are some things that the facility is not permitted to incinerate which includes infectious materials, explosives, and radioactive materials.

Clean Harbors is made up of four divisions. The El Dorado facility falls into the technical service division. These plants specialize in hazardous waste management, from pick up at the generators to final disposal. The Safety Kleen division focuses on oil collection and parts washers. The industrial and field service operations division assists industries in shut downs, tank cleanings, and hydroblasting. The oil and gas services division helps to maintain drilling operations including exploration and lodging.

Roblee spoke proudly on the numerous safety accolades that his facility has received in recent years. In 2012, the site was declared an OSHA certified VPP Star Site and was recently re-certified in 2015. On Feb. 6, 2016, the site achieved the Department of Labor’s prestigious 1,000,000 man-hour milestone without any lost time injuries. “Those are great awards and we have a great safety program out there,” he said.

The long-awaited expansion is scheduled to be completed by October of this year said Roblee. Completion of the two-year process will result in a state-of-the-art incineration facility that is designed to meet or exceed all of the regulatory requirements needed. Roblee announced that with the new expansion nearing completion, they are in need of additional staffing to support the operation. Beginning next week, Clean Harbors will begin the campaign for 30 to 35 employees much needed at the facility. Roblee said that they hope to have all 30 to 35 positions filled by August 1st. Some of the positions needed are maintenance mechanics, welders, pipe fitters, hydraulics operators, drivers, and industrial service technicians.

Roblee concluded by reminding attendants about Clean Harbors Household Hazardous Waste Collection events in Union County. “It’s a great event and being a part of El Dorado, I don’t want this stuff in our landfill,” he said. “This is where I’m raising my family.” The collection event is free to residents of El Dorado and Union County and is held from 8 a.m. to 12 p.m. every third Saturday from April to September. Pesticides, weed killers, aerosols, paints, chemical cleaners, car batteries, and waste fuels are just some of the items that are collected during this event. The next collection day will be on June 18. A program that he’s proud of, Roblee said “It’s the least that we can do to give back to the community that hosts us here and allows us to have our operations here in their county.”