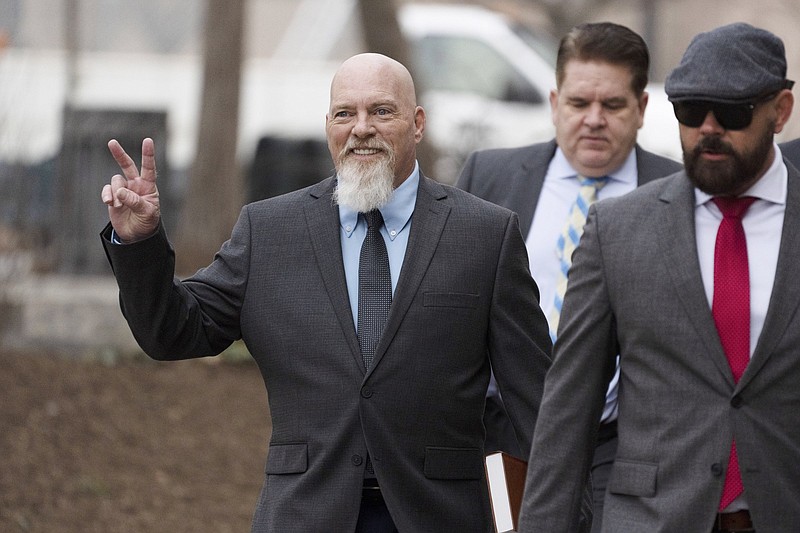 Richard Barnett, left, an Arkansas man who was photographed with his feet on a desk in former House Speaker Nancy Pelosi's office during the Jan. 6 U.S. Capitol riot, arrives at federal court in Washington, Tuesday, Jan. 10, 2023, with his attorneys, Joseph McBride, right, and Bradford Geyer, center. (AP Photo/Manuel Balce Ceneta)

WASHINGTON -- Three witnesses had testified in the Capitol riot trial of Richard "Bigo" Barnett by the end of the day Wednesday.

They were Emily Berret, a staffer for House Speaker Nancy Pelosi; Capt. Carneysha Mendoza of the U.S. Capitol Police; and Gerald Stutte of Fayetteville, who is the asset protection lead at the Bass Pro Shop in Rogers.

He faces enhanced charges for entering the Capitol with a dangerous or deadly weapon -- a ZAP Hike 'n Strike Hiking Staff that Barnett purchased at Bass Pro Shop in Rogers a week before the riot. Prosecutors say the stun gun was advertised as being capable of delivering a 950,000-volt shock.

Stutte testified that he provided the FBI with video of Barnett in the store on Dec. 31, 2020. Barnett purchased the stun gun, pepper spray, two-way radios and a multi-tool, according to a transaction document Stutte provided to the FBI.

Stutte described the Hike 'n Strike as a walking stick with a stun gun on the end.

Berret was the first witness. Her testimony began Tuesday and continued Wednesday morning.

Barnett gained worldwide attention after posing for photos with his foot on top of Berret's desk in Pelosi's Capitol office suite.

Berret testified Tuesday that, after the riot, she found a quarter on her desk and a note that read, "Hey Nancy, Bigo was here, you biotch."

Berret said she threw the quarter in the trash "because it was covered with blood."

One of the charges against Barnett is theft of government property, for taking an envelope from Pelosi's desk. The envelope was addressed to a congressman from Missouri. The return address was "Speaker of House."

In videos presented in court on Wednesday, Barnett told an interviewer that he took the envelope because he cut his hand and got blood on it. Barnett said he left a quarter behind to pay for the envelope.

Mendoza testified Wednesday about the Capitol riot in general. Barnett's attorneys had sought to preclude her testimony, saying she had no direct interactions with Barnett on Jan. 6, 2021.

• 18:1752(a)(2) and (b)(1)(A); Disorderly and Disruptive Conduct in a Restricted Building or Grounds with a Deadly or Dangerous Weapon