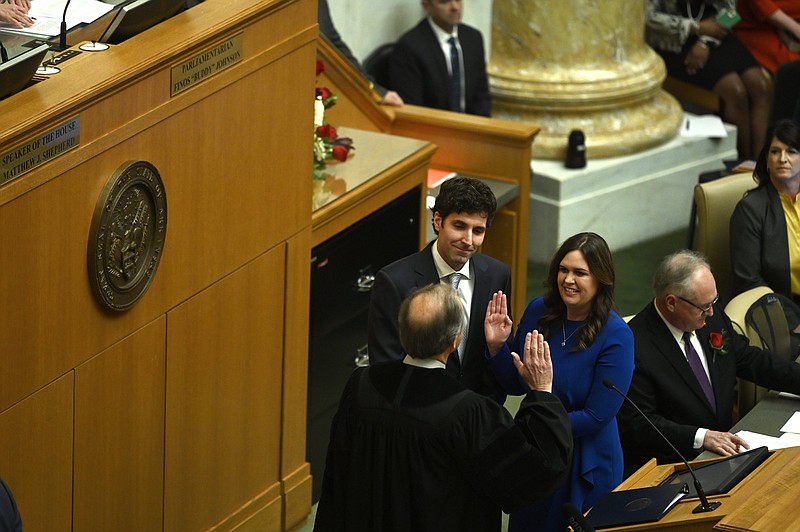 The Honorable John Dan Kemp, Chief Justice of the Arkansas Supreme Court, left, swears Sarah Huckabee Sanders into office with her Husband, Bryan, on the floor of the Arkansas House of Representatives on Tuesday, Jan. 10, 2023. (Arkansas Democrat-Gazette/Stephen Swofford)

After being sworn in as Arkansas' first female governor, Gov. Sarah Huckabee Sanders on Tuesday urged state lawmakers to think bigger and bolder and to do better than Arkansas has ever done before.

In her subsequent inaugural address on the steps of the state Capitol, the Republican governor described herself as "a bold conservative reformer" and pledged to sign executive orders aimed at limiting the growth of state government and regulations and at preventing "the political indoctrination" of Arkansas' school children.

The 40-year-old daughter of former Gov. Mike Huckabee was sworn in by Chief Justice Dan Kemp, with her husband Bryan Sanders holding a Bible at her side, in the Arkansas House of Representatives chambers Tuesday morning, with the Sanders' three children watching. She succeeded term-limited former Gov. Asa Hutchinson, who had served as governor since 2015.

"It is an absolute honor to stand before you as the 47th governor and, and the first woman governor of the great state of Arkansas," Sanders said, with representatives and senators packed into the House's chambers along with Republican U.S. Sens. John Boozman and Tom Cotton, former Democratic U.S. Sen. and Gov. David Pryor and Huckabee and Hutchinson.

"As we gather in these storied chambers at the dawn of a new day, a turning point in the history of Arkansas will usher in a new era of good jobs, great schools, safer streets and stronger families," she said.

"The people of Arkansas in their vast wisdom have entrusted a new generation to lead," Sanders said. "This is our moment. This our opportunity. And you and I are leaders who our people have chosen to get the job done."

Arkansas has weathered its fair share of storms in recent years, such as the worldwide pandemic, shuttered schools, crippling inflation and rising crime, she said, but that long night of hardship and heartache is breaking into a brighter tomorrow, she said.

"Your partnership is the reason I know we will deliver for the people of Arkansas," she said. "I want this legislature to know that as governor, I will always have an open door and an open mind. And like most of you, I don't care about getting the credit. I care about getting results."

Sanders called for delivering "another historic tax cut and give the people of Arkansas the pay raise that they deserve" with family budgets still battered by inflation.

"Let's not surrender the competition for jobs to other states. Let's cut taxes and bring the jobs right here to Arkansas and let's also cut wasteful spending so we can continue to phase out the state income tax altogether," she said.

Sanders asked lawmakers to send her legislation that expands pre-kindergarten access, improves literacy and gives students what she called "real world skills they need to succeed in the workplace."

She said parents cannot be an afterthought in education and parents are the foundation of a child's success, "so let's give parents a greater role in education, including the right to choose the school that's best for their child whether it is public, private or parochial.

"When we give parents a choice, we given children a chance," said Sanders.

She said Tuesday that any government that tolerates rampant crime has failed in its most important duty to secure the lives, liberty and property of its citizens, and "as of today, Arkansas will tolerate crime no longer.

"Together, we will build the prison space we need to keep our citizens safe and will put more of our courageous cops on the street," Sanders said. "We will shut down the crime wave that has plagued our cities, and we will teach our children that the badge is a symbol of justice, the police are a force for good and our officers are heroes who are worthy of our highest respect."

There is much more than she and the Legislature can achieve as partners working together, she said.

In her inauguration address on the steps of the state Capitol, Sanders said her parents raised her in a home with love, prayed for her and nurtured her faith and taught her the meaning of principled leadership by the power of their example.

"Mom and Dad, I have never been prouder to be your daughter," she said.

Sanders said "this day is especially notable because I happen to be the youngest governor currently serving any where in the country as well as the first daughter of a governor to take the oath of office and the first very woman to serve as the governor or Arkansas.

"And while I don't want to dismiss the significance of all that... I did not seek this office to be the first anything. I ran to make Arkansas first in everything," she said.

"So today, let us begin a new chapter in the story of Arkansas to be written by a new generation of proud Arkansas sons and daughters, who are stepping forward to lead."

"With this new generation, a new vision is coming to Little Rock and today a bold conservative reformer is coming to the Governor's Mansion," she said. "I am assembling a team of young visionary leaders from across Arkansas and the nation and know that with this team and our partners in the Legislature, great things are ahead."

Sanders said the vision is for an Arkansas where strong families thrive in safe communities, jobs are abundant and paychecks are rising, and schools get back to teaching reading, writing, math and science and "where our children learn that the identity that truly matters is the one that we all share, an identity as children of God and citizens of the United States of American."

Some of the ideas coming from the "new generation" of leadership that Sanders referred to include eliminating the state income tax, school choice and promoting the state's tourism industry.

Seven-term Rep. Lane Jean, R-Magnolia, said, "We all got to turn the baton over at some point

"I welcome new blood, I welcome young people getting involved," he said.

"I think we have that new leadership coming in both our chambers," Cozart said. "In two or three years – four – I'll be gone."

House Democratic leader Tippi McCullough of Little Rock said she hoped Sanders would strike a more "aspirational" and "collaborative" tone in her speeches, particularly in the inaugural speech Sanders delivered in front of the Capitol.

She said she was particularly struck by the executive orders Sanders announced on her first day in office.

"It seemed like the throwing down of the gauntlet in a sense," McCullough said of the executive orders.

Nonetheless McCullough said many of the priorities highlighted by Sanders – including education, criminal justice and tourism – are important areas for lawmakers to address. 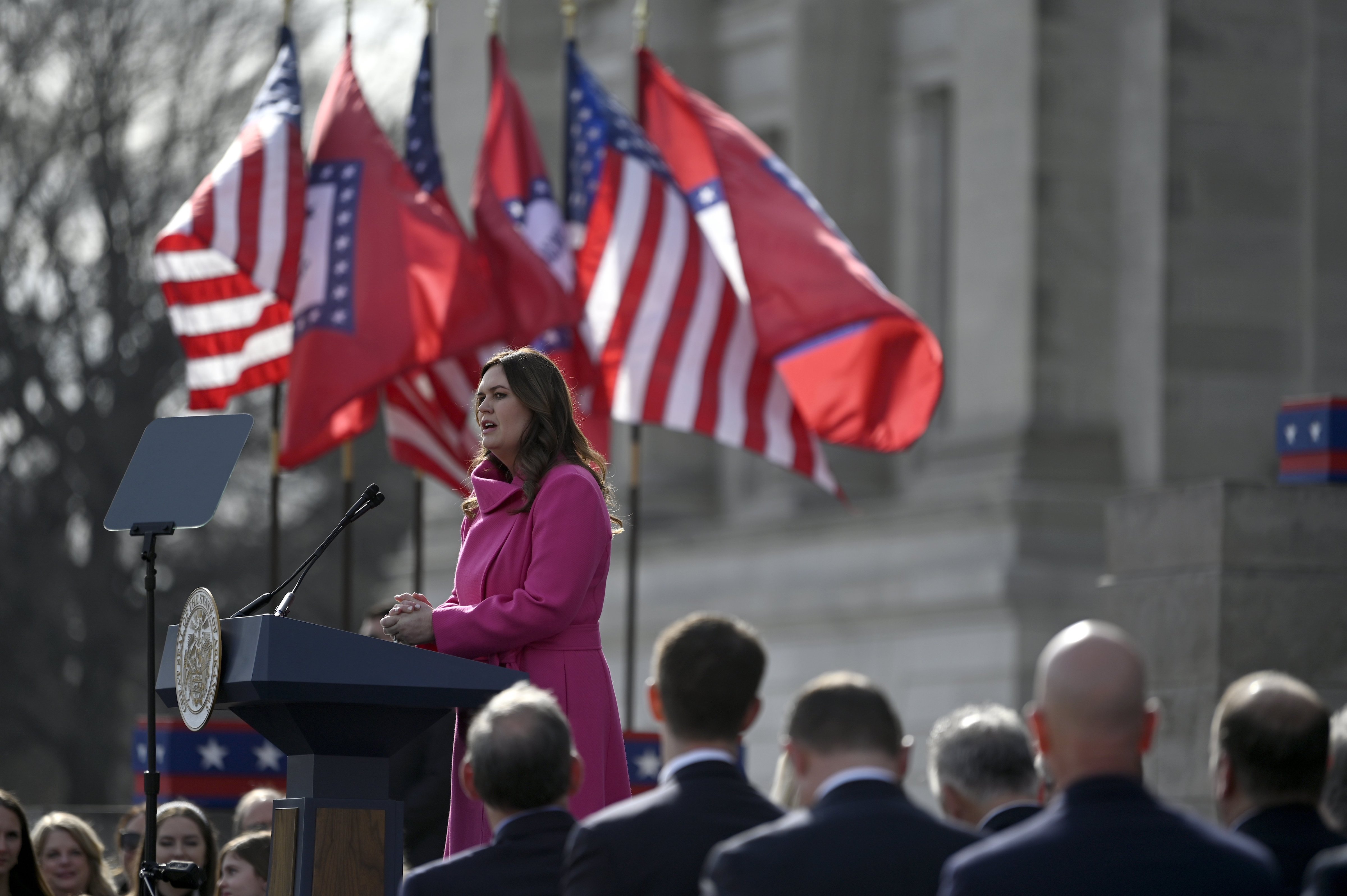 Sarah Huckabee Sanders delivers her inaugural address to the public on the steps of the Arkansas State Capitol on Tuesday, Jan. 10, 2023. (Arkansas Democrat-Gazette/Stephen Swofford) 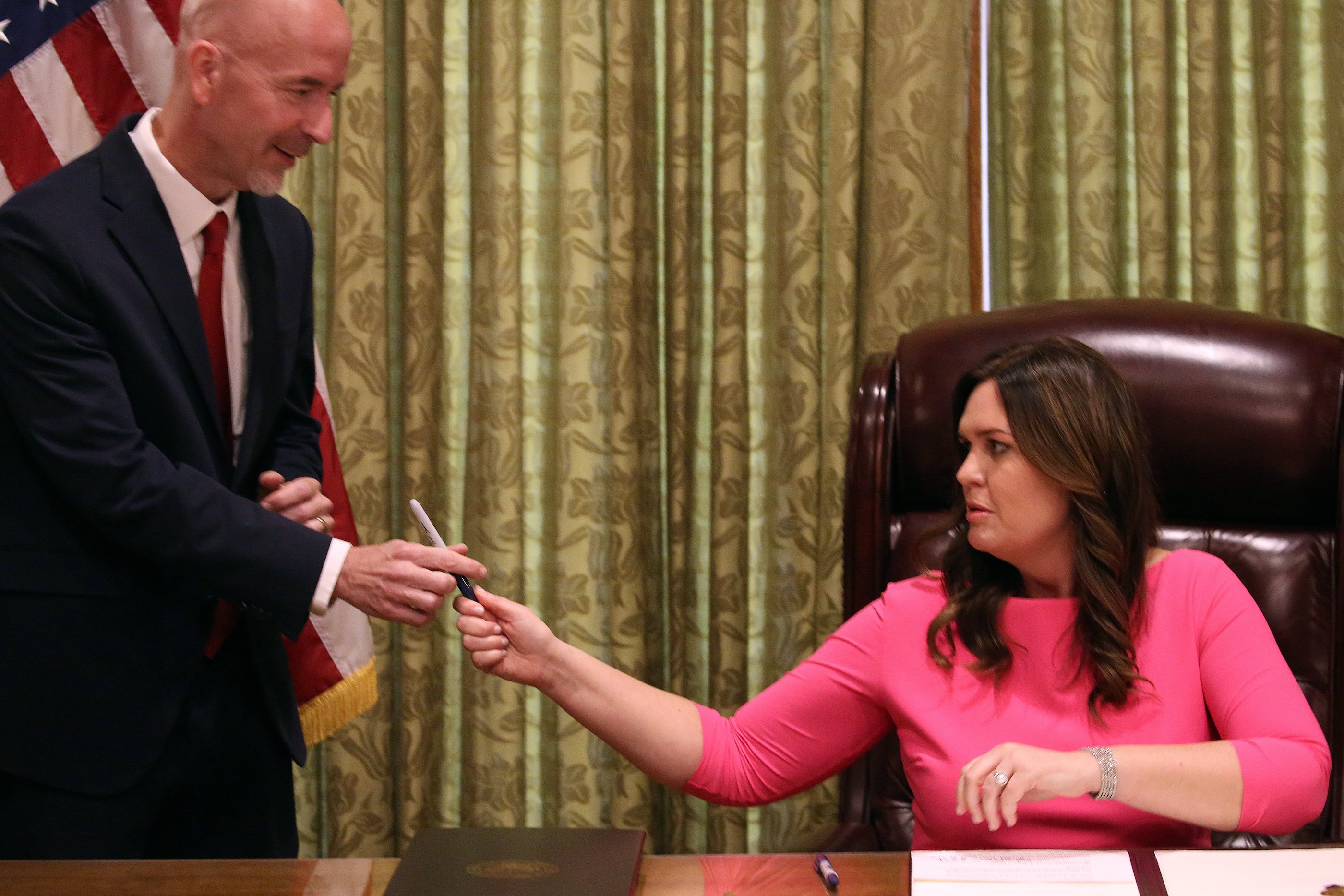 Gov. Sarah Huckabee Sanders hands a pen to Education Secretary Jacob Oliva after signing one of her first executive orders on Tuesday, Jan. 10, 2023, at the state Capitol in Little Rock. (Arkansas Democrat-Gazette/Thomas Metthe)