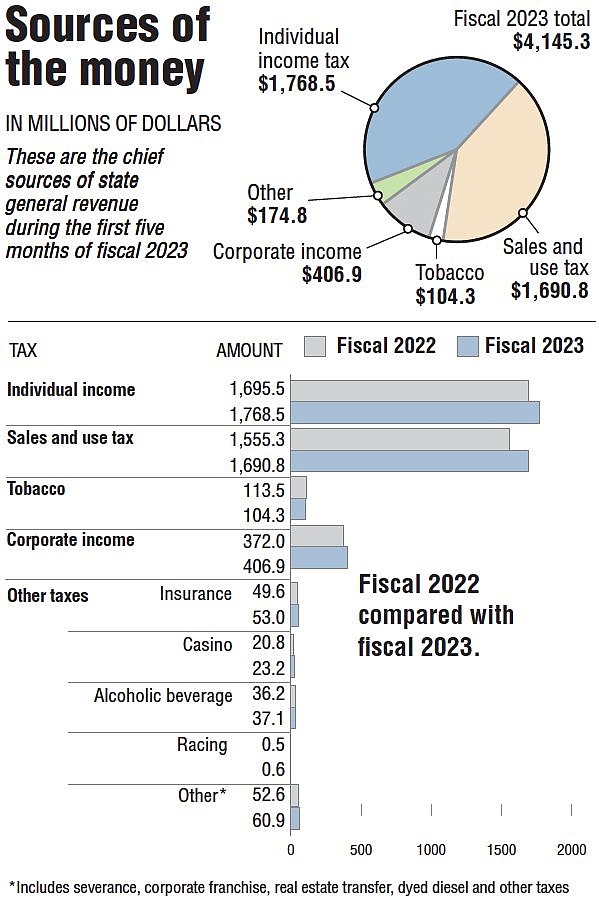 Fueled primarily by better than expected corporate and individual income tax collections, Arkansas' general revenue increased in December by $53.6 million, or 7.4%, over the same month a year ago to $773.2 million.

The month's total general revenue collections beat the state's latest forecast issued Nov. 10 by $117.4 million, or 17.9%, the state Department of Finance and Administration reported Wednesday in its monthly revenue report.

December's general revenue collections represent the largest amount collected in any December and the previous high was $719.6 million collected in December 2021, said Whitney McLaughlin, a tax analyst for the finance department.

John Shelnutt, the state's chief economic forecaster, said Wednesday the revenue report for December "still shows high growth and fits with other information that we have that shows really no slowdown at this point of the state economy in terms of the workforce, the labor market, [and] job conditions.

"The spending is still elevated compared to forecast as well as pre-COVID averages," he said.

"2022 was a very good year in Arkansas," he said in a written statement. "Sales tax collection growth remained elevated in December and over the first six months of fiscal year 2023."

Tax refunds and some special government expenditures are taken off the top of general revenue, leaving a net amount the state agencies are allowed to spend up to the amount authorized by the state's Revenue Stabilization Act. The state's net in December increased by $38.1 million, or 5.9%, over December 2021 to $684.3 million, outdistancing the state's forecast by $112.9 million, or 19.8%.

Departing Gov. Asa Hutchinson said Wednesday that "Arkansas is still going strong with a net revenue above the revised forecast despite concerns of a recession," after the first six months of fiscal 2023.

"While a recession is predicted by some nationally, I have more confidence in Arkansas's economic resilience," the Republican governor said in a written statement.

"As this is the last revenue report under my watch as governor, I would note that our conservative approach to state spending has resulted in record reserves of over $2 billion, historic tax cuts, and a reduction in our state bonded indebtedness of over $1 billion," Hutchinson said.

The finance department's Nov. 10 forecast projects a general revenue surplus of $598.1 million at the end of fiscal 2023.

Asked if that projected surplus is essentially guaranteed, Shelnutt said, "We still have a major hurdle and that is the income tax filing season, so that is a major determinant with the largest collection month in April and really large refund months in March and April, [and] we really need to look at that and see how it relates to our assumptions about that accelerated income tax cuts that have been enacted."

Governor-elect Sarah Huckabee Sanders will be sworn in as governor Tuesday, taking the reins of state government from Hutchinson. Sanders also is a Republican. Hutchinson has served as governor since 2015.

In November, Hutchinson proposed a $314 million increase in the state's general revenue budget to $6.33 billion in fiscal 2024, starting July 1, 2023, with $200 million of the increased general revenue earmarked for the public schools to help boost teachers' salaries.

At that time, the governor said his proposed budget for fiscal 2024 would represent a 5.2% increase over the current budget of $6.02 billion, leaving a projected general revenue surplus of $254.9 million at the end of fiscal year 2024. Considering inflation was more than 8% last year, limiting the growth of the state's general revenue budget to 5.2% reflects conservative budgeting in these challenging times, he said.

Sanders spokesman Judd Deere has said Sanders wants to "develop a budget that makes government lean and efficient, cuts taxes and prioritizes the promises she made to Arkansans to make our state one of the best to live, work and raise a family."