Beds run out at Beijing hospital as COVID-19 spreads 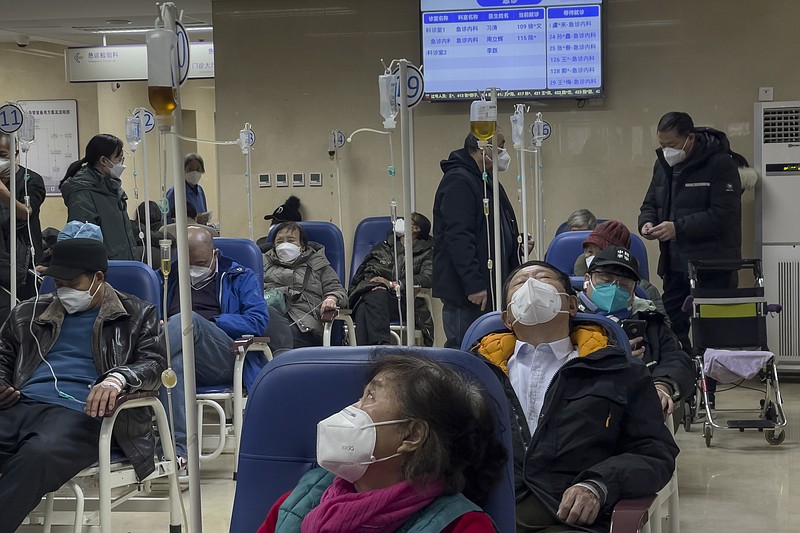 Patients receive intravenous drips at the emergency ward of a hospital in Beijing, Thursday, Jan. 5, 2023. Patients, most of them elderly, are lying on stretchers in hallways and taking oxygen while sitting in wheelchairs as COVID-19 surges in China's capital Beijing. (AP Photo/Andy Wong)

By ANDY WONG and KEN MORITSUGU

BEIJING (AP) -- Mostly older men and women wearing masks rested on cots in hallways, while others slept upright in crowded waiting rooms with numbered chairs. Many received fluids intravenously, while others were given oxygen. The sound of people coughing -- and of new patients arriving on gurneys -- was steady.

At the Chuiyangliu hospital in the east of Beijing on Thursday, signs of the COVID-19 outbreak stretching public health facilities in the world's most populous nation were on full display.

Beds ran out by midmorning at the packed hospital, even as ambulances brought more people in. Hard-pressed nurses and doctors rushed to take information and triage the most urgent cases.

The outbreak appears to have spread the fastest in densely populated cities first. Now, authorities are concerned as it reaches smaller towns and rural areas with weaker health care systems.

Overseas, a growing number of governments are requiring virus tests for travelers from China, saying they are needed because the Chinese government is not sharing enough information on the outbreak. China has criticized the requirements and warned of countermeasures against countries imposing them.

World Health Organization head Tedros Adhanom Ghebreyesus said Wednesday he was concerned about the lack of outbreak data from the Chinese government.

At a daily briefing Thursday, Chinese Foreign Ministry spokesperson Mao Ning said Beijing has consistently "shared information and data with the international community in an open and transparent manner."

"At present, China's COVID-19 situation is under control," Mao said.

On Sunday, many remaining restrictions -- some already not being enforced -- will be lifted.

"We recommend that everyone not return to their hometowns unless necessary during the peak of the outbreak," the government of Shaoyang county in Hunan province in central China said in a notice dated Thursday. "Avoid visiting relatives and traveling between regions. Minimize travel."

Similar appeals were issued by Shouxian county in Anhui province southeast of Beijing and the cities of Qingyang in Gansu province in the northwest and Weifang in Shandong on the east coast.

Despite such concerns, Hong Kong announced it will reopen some of its border crossings with mainland China on Sunday and allow tens of thousands of people to cross every day without being quarantined.