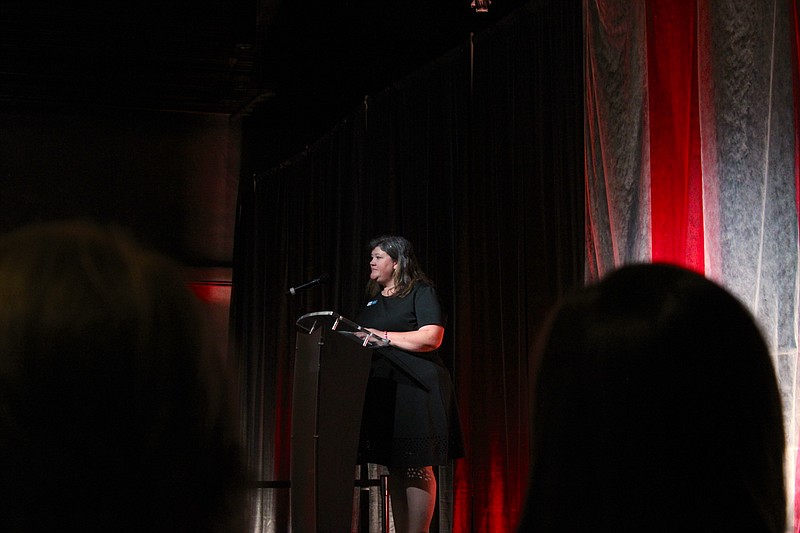 Local residents gathered under a makeshift "Big Top" in the Murphy Arts District's First Financial Music Hall on Tuesday for a fashion and art show fundraiser benefiting The CALL of Union County.

South Arkansas Community College President Dr. Bentley Wallace -- the ringleader for the evening -- described fall looks from local boutiques and retail stores including Sports Alley, Ken's Discount, Too Spoiled Rotten, Southern Threads, Sweet & Sassy, Especially For You, The Perfects and Me & Maude as young men, women, girls and boys modeled the outfits on a catwalk.

Bravo Dance Centre also prepared several numbers for the event, including one to conclude the show and involve attendees, who filled the music hall.

But the stars of the show, though they did not make a formal appearance at Tuesday's event, were the children in foster care in Union County.

"We are serving the children that are probably sitting in a classroom next to yours," Karen Hicks, Union County coordinator for The CALL, told attendees. "And you all are creating the ability for us to continue to serve in Union County."

Hicks introduced Tiffany and Clint Boykin, who were named Foster Parents of the Year in the region by the Arkansas Department of Human Service's Division of Children and Family Services in July. Hicks said the couple has fostered 25 children and adopted two teenagers in the process.

"When we first started our journey, we had an idea of what we thought it would look like," Tiffany Boykin said. "A lot of y'all know we fostered two twin girls from 11 months to 3 years old -- to say The CALL has filled the gaps through those years is an understatement. Think about The CALL and all the gaps that need to be filled in these little ones' lives."

She added that there are myriad ways one can help local foster children, from donating time and money to offering to babysit for a friend who is fostering a child.

Throughout the evening, local artist Jessica Kearns worked on a painting, which was awarded at the end of the evening to an attendee who entered a raffle, proceeds of which went to The CALL. Art created by local foster children was also featured, and a silent auction was held during the show.

Wallace also called for donations for the nonprofit during a brief intermission, and ticket costs also went to the organization.

Shasta Mills, an agent at Southern Realty Group (SRG), which organized Tuesday's fundraiser on The CALL's behalf, said the proceeds were still being counted as of Wednesday, and a check presentation is planned for next week.

"We are overwhelmed with the support of our whole community," Mills said in an email Wednesday.

Gallery: Fashion and art show fundraiser for The CALL

According to the DHS Division of Children and Family Services, approximately 4,500 children in Arkansas are in foster care. Hicks said that as of Tuesday, 37 children in Union County were included in that figure.

"I am passionate about children who are waiting," she said. "They do not know what their forever looks like."

The CALL, which is entirely funded by local residents' and churches' support, provides support services to local foster families. The CALL Mall offers material resources, like clothes, hygiene products, toys and more, and the nonprofit's support center provides a space for foster families to meet, commiserate and learn from one another.

The support center also gives biological parents who have been separated from their children a place to visit them in a home-y setting as they work toward reunification. Hicks said earlier this month that foster families drop by the center 10-12 times a week, and three family visits were scheduled every week in September.

Shaneil "PJ" Yarbrough, part of The CALL's leadership team who said she is a former foster child herself, said she was blown away by the creativity and work SRG put into the fundraiser.

"I am so excited to see the turnout and all the good that's being done for foster families in Union County," she said. "I'm so pleased."

Marita Caldwell attended the fundraiser with her daughter, Claire. She said the event was eye-opening for her.

"We've been looking for ways to learn about the community and ways to get involved," she said.

Hicks also announced at the fundraiser that The CALL's lemonade stand, which was first introduced in 2019 after the Frontier Explorer's 4-H Club made it as a service project, is back online and available for fundraisers. She explained that individuals or groups -- like Camp Fire, Boy Scouts or other nonprofits, for example -- can used the lemonade stand to fundraise for The CALL in their neighborhoods or at events.

"It's a great way to plug in and teach kids that everyone can do something to help children in Union County," she said.

Hicks thanked those who attended and those who helped organize and make the fundraiser a success.

"I had no clue what to expect until (I went to a rehearsal) Sunday night. I'm so humbled by this work," she said. "And I'm even more humbled that I get to live in this community."

She highlighted The CALL's mission, which also includes recruitment of Christian families to provide foster homes for local children.

"Thank you for being His hands and feet... One day families will not be broken," she said. "But until the day comes when we are no longer needed, I'm going to continue to look forward to working for children in this community."

For more information about the CALL, visit thecallinarkansas.org/union-calhoun, call 870-904-0581 or email [email protected]