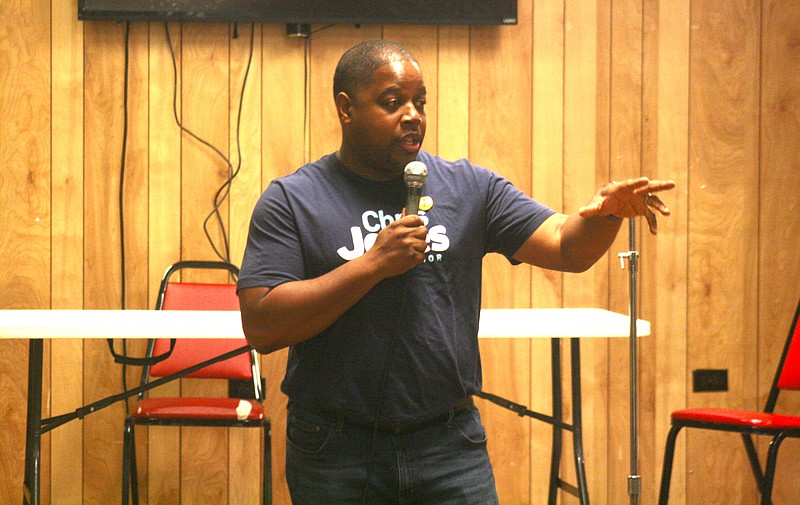 Democratic nominee for Governor of Arkansas Chris Jones spoke at the Elks Lodge in El Dorado on Monday. (Matt Hutcheson/News-Times)

Chris Jones, Democratic candidate for governor of Arkansas, visited the Elks Lodge in El Dorado on Monday and spoke to supporters about his plans for the state should he be elected.

Jones, according to his campaign website, holds a Ph.D. in urban planning and was previously director of the Arkansas Regional Innovation Hub.

Jones, who studied physics and math at Morehouse College and nuclear engineering at MIT, referenced both his scientific background as well as his background growing up poor in Pine Bluff as part of his qualifications for the role.

"Even the knowledge and ability to put a man on the moon and a rover on Mars – it gives us the technical solution, but if we don't have love for each other and love for our neighbors, we're in trouble," Jones said.

Jones said a core tenet of his campaign is spreading "PB&J" – preschool, broadband and jobs – across the state. He continued with the metaphor.

"In a bad sandwich, the peanut butter is clumped, and the jelly is clumped and you put it on the bread and take a bite and all you get is dry bread. My mom is from Stephens, my dad is from Hughes and we're standing in El Dorado. There are too many folks in our places taking bites and getting dry bread; there's no opportunity, the school quality is bad, they can't get broadband access anywhere. What we focus on is – let's spread it all over," Jones said.

Jones said his focuses on preschool and broadband are in part related to a goal of increasing the reading level of state students. He also touched on his thoughts on economic issues.

"It's real economic development looking at the regions across the state and bringing in jobs that are living wage jobs, where you can work the whole week and keep a roof over your head. [It's] also lifting up small [and] local businesses and providing resources necessary so that businesses that already exist, the lifeblood of the community, get what they need," Jones said.

Jones also took questions from the audience following his speech.

Sanders visited El Dorado as part of her "Freedom Tour" last September, when she held a meet-and-greet at Pupp's BBQ.