Record number of Airstreams to visit El Dorado next month 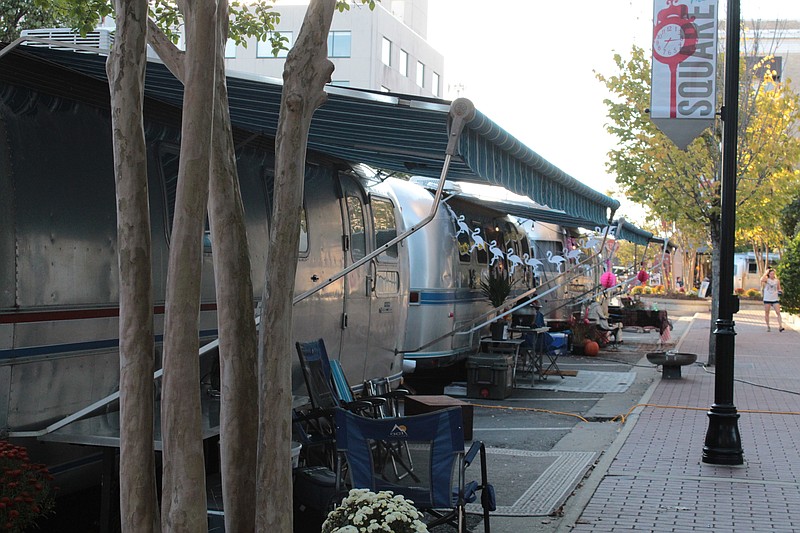 Airstream campers lined downtown El Dorado on October 21, 2021 as the fourth-annual Airstreams on the Square event kicked off. The fifth annual event is scheduled this year from Oct. 20-23. (Caitlan Butler/News-Times)

Nearly 60 recreational vehicles have signed up for the fifth annual Airstreams on the Square, which is slated for Oct. 20 - 23 in downtown El Dorado.

Beth Brumley, executive director of Main Street El Dorado, said 56 campers have registered for the event -- the most ever since Airstreams was launched in 2018.

Presented by MSE and the Arkansas Razorback Airstream Club, Airstreams is part of a nationwide campaign to stage Main Street/urban camping events in order to promote the Airstream lifestyle and help stimulate economic development and vitality in small-town America.

El Dorado is the first and only city in Arkansas to host such an event.

Airstreams has drawn participants from throughout Arkansas and several other states, including Louisiana, Texas, Oklahoma, Georgia, Florida and Ohio.

They set up camp around the Union County Courthouse square for several days and MSE works with the group to coordinate activities to which the public is invited, including a street dance, outdoor movies, RV tours and more.

The Downtown Business Association also help to make campers feel welcome and the campers support local businesses on and beyond the downtown square during their stay in El Dorado.

"If you haven't come down for this event, it is a very fun event. They like to eat and drink and go shopping and they spend a lot of money and return money afterward," Brumley said, referring to cash donations the Arkansas Razorback Airstream Club (ARAC) makes to MSE following the Airstreams event each year.

Additionally, the ARAC contributes to local food pantries by accepting canned goods as an entry fee for camper tours.

Airstreams participants have said there is more community engagement in El Dorado than in other such rallies they attend in other communities.

The ARAC and MSE have reported a steady stream of area residents mingling with RVers and attending auxiliary events each year.

They said 61 RVers initially signed up this year, noting that 33 responses poured in on the opening day of registration in February

"We've already had five drop out and we expect more cancellations," Brumley said during an MSE board meeting last week.

For the past several months, MSE board members have discussed the need for more space to accommodate RVs.

As participation has increased, the layout has extended north on North Washington Avenue to Oak Street.

The theme for Airstreams 2022 is "It's Showtime in El Dorado!", the tagline for El Dorado's Festival City brand, and plenty of auxiliary activities, many of them open to the public, have been lined up to help keep airstreamers entertained while they are in town.

Campers are expected to begin arriving in El Dorado between noon and 5 p.m. Oct. 20.

• At 5:30 p.m., MSE will host Thirsty Thursday Taco Bar, during which a taco dinner will be served.

The taco bar is $15 per person and includes one free margarita.

Brumley said the public may join in the Taco bar if they purchase a dinner in advance.

• The dinner will be followed by a performance of Showdown at Sunset at 6 p.m. and karaoke at 6:30 p.m., both of which are free and open to the public.

• A dance party with live music from the band Blackstrap is set for 8 p.m. on Oct. 21. The event is free and open to the public.

• On Oct. 22, an International Chili Society chili cookoff will begin at 8 a.m.

Chili samples will be sold from 1 until 3 p.m. and tasting will commence at 3 p.m., with participants voting for their favorite chili recipe.

Brumley said four cookers have registered for the chili competition so far and MSE is encouraging other cookers who are interested in entering the competition to sign up.

She said Airstreams will not conduct RV tours this year; however, the public is invited to visit with airstreamers and donate canned goods, which will go to the Salvation Army of El Dorado.

Visitors may also judge their favorite RV in a Camper Decor competition. Judging will take place from noon until 4 p.m.

Awards for the chili cookoff will be announced at 4:30 p.m.

A private meal and awards ceremony for airstreamers will be held during "It's Showtime!", a red-carpet event that will begin at 7 p.m. in the courthouse.

For more information, to enter the chili cookoff or to purchase a taco meal or commemorative Airstreams 2022 T-shirt for $20, call the MSE office at 870-862-4747 or go to www.mainstreeteldorado.org.

Scare on the Square

MSE is also preparing for the holiday season, starting with Scare on the Square from noon until 4 p.m. Oct. 29.

Families with children and pets are invited to trick or treat downtown and participate in a host of other activities presented by businesses, churches, and organizations.

McDonald said the event, which typically draws 1,500 - 2,000 children, has grown over the past few years.

In 2021, MSE added a children's costume contest and the Union County Animal Protection Society (UCAPS) brought back the popular Mutt Strut, in which pet owners don their furry friends in costumes and parade them around Union Square.

The Mutt Strut had last been hosted in 2014.

This year, McDonald said churches, local businesses off the square, HealthWorks and the El Dorado Fire Department will set up shop for Scare on the Square.

Early Wednesday afternoon, Brumley said she had just received calls from a couple of more businesses and organizations who want to participate this year.

"Scare on the Square is definitely going to be a big event and we will close down Jefferson (Avenue) and Elm (Street)," Brumley said, adding, "We keep having people reach out to us to join."

Brumley said UCAPS will coordinate the Mutt Strut and The CALL of Union County, which mobilizes local churches to serve children who are placed in foster care, is planning a children's costume pageant.

Anyone who is interested in participating in Scare on the Square or any of its activities may call the MSE office for more information.

MSE is partnering with the DBA, Murphy Arts District and the Diamond Agency, a local advertising firm, to have the "Best Christmas Ever!", the theme for the city's 2022 holiday marketing campaign.

Riding off the success of last year's promotion, "Merry and Bright," the four groups are once again teaming up to develop an advertising push that will market Christmas in El Dorado to Central Arkansas and North Louisiana.

The campaign is expected to be rolled out in the coming weeks, just in time for a bevy of holiday events, including:

"One suggestion we had was a food truck or that a restaurant remain open downtown," Brumley said.