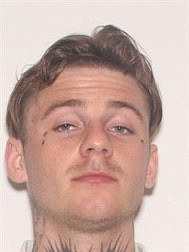 The El Dorado Police Department has issued a “Most Wanted” alert for Forrest A. Hobson, 25, who is wanted on charges of second-degree escape and first-degree criminal mischief.

Police advise that Hobson should be considered armed and “extremely dangerous.”

According to a press release, Hobson is wanted in connection with an incident that occurred early Thursday morning. Additional details weren’t immediately available.

Information leading to Hobson’s apprehension could make one eligible for a reward of up to $1,000.

Local residents are urged to use “extreme caution” if they see Hobson, and not to approach him; instead, they should contact a local law enforcement agency.

Hobson is described in a press release as a white male. A photo of him also shows that he has several small tattoos on his face, near his eyes, as well as a tattoo on the front of his neck. He has blue eyes.

The News-Times will update this story as more information becomes available. Visit eldoradonews.com for the latest.