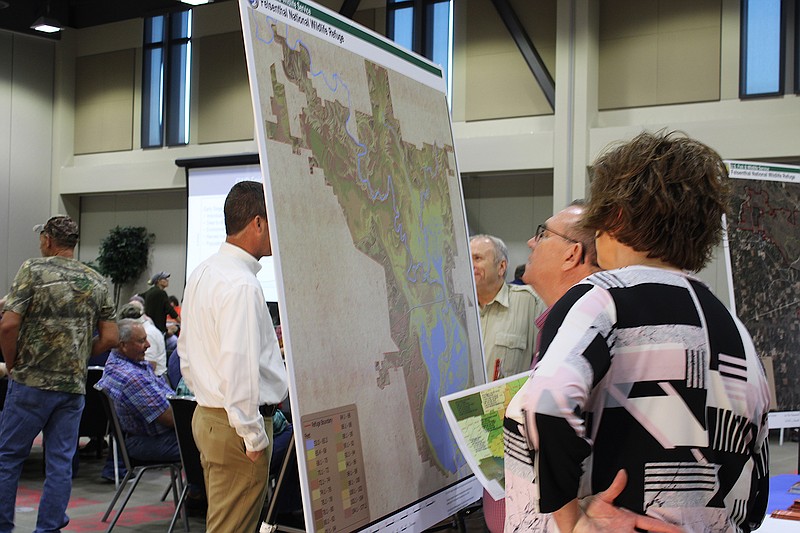 Hunters look at a map of the Felsenthal National Wildlife Refuge, one of several public lands available to hunt on, during an open house on deer season hosted by the Arkansas Game and Fish Commission on Thursday. (Caitlan Butler/News-Times)

Conditions point to a good season for deer hunters in south Arkansas, deer biologists from the Arkansas Game and Fish Commission said on Thursday.

During an open house on "all things deer-related" at the El Dorado Conference Center on Thursday evening, AGFC staff gathered with employees from the Louisiana Department of Wildlife and Fisheries and U.S. Department of Fish and Wildfires to talk to local hunters about the upcoming season, which opens Sept. 24 with bow hunting.

One of the primary reasons for the meeting was to introduce hunters to new regulations in Union, Bradley and Ashley counties related to Chronic Wasting Disease (CWD) following the discovery of a case in a doe harvested in Union County late last year.

Ralph Meeker, a deer biologist for the AGFC, explained Thursday that button bucks won't count towards the bag limit on bucks for Union, Bradley and Ashley counties – which are all in Tier II of the AGFC's CWD Management Zone – because any bucks that are harvested could help contribute to reducing spread of the prion disease.

"We don't want to deter people from hunting, shooting that doe, because they might accidentally kill a button buck," Meeker said. "Research shows that buck harvest for all age classes is helpful to reduce (CWD) spread."

Brown said the COVID-19 pandemic may have played a part in the high harvest in 2020.

"COVID put more hunters out in the woods," he said, pointing to the cancellation of many fall and winter athletic events and noting that the AGFC sold more hunting licenses that year than usual as well.

"Last year, last harvest, we had that 14-year low, but the year before we had a record high – so we figure we're going to shake out somewhere in between," Brown said Thursday about the upcoming deer season.

Brown said acorn production has been spotty this year, so depending on where one is hunting, they may see an abundance of deer or very few. In south Arkansas, he said, areas with few deer typically have a few older animals, while lots of young deer will populate other areas.

Weather conditions this year may also help the harvest. Brown said the dry summer followed by lots of rain resulted in an explosion of vegetation throughout the area, which also put deer on the move.

"All in all, we have pretty good expectations for this year," he said. "It won't be worse (than last year)."

"We don't think it's going to be bad for hunting," he said.