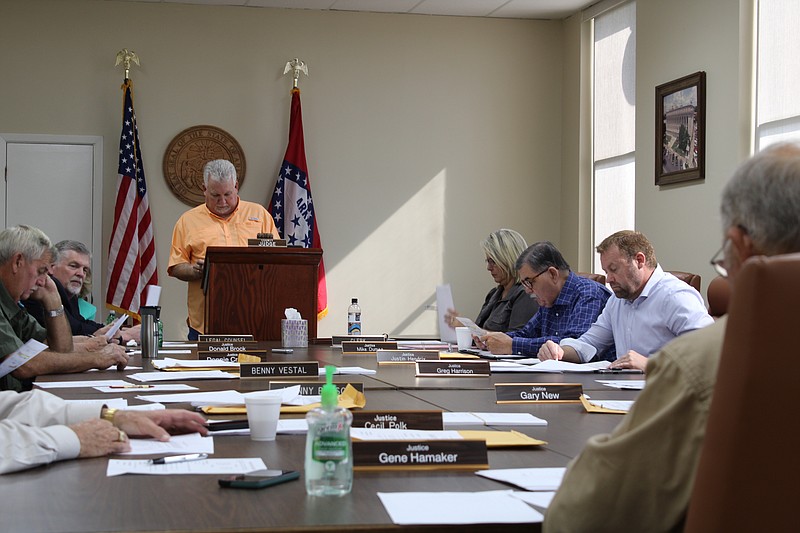 The Union County Quorum Court appropriated funds for several projects and initiatives approved over the summer during their regular monthly meeting on Thursday.

Justices of the Peace formally approved an ordinance to give most county employees $2,500 bonuses paid out of the CARES (Coronavirus Aid, Relief and Economic Security) Act federal COVID-19 relief funds, and appropriated the money for those bonuses and $4,000 stipends for Union County jail officers from the CARES Act budget.

In total, the bonuses and stipends together will cost $327,500, plus $104,830.50 for FICA (Federal Insurance Contributions Act) matching and retirement for the workers who received the extra payments.

Union County Judge Mike Loftin approached JPs in July with a proposal to purchase the building for $800,000 to house a new 911 dispatch center serving both the El Dorado Police Department and Union County Sheriff's Office, and a crisis stabilization unit to give people in mental health crisis a short-term place to stay and recover.

"Right now, if we have somebody that's off their meds, they're out here trespassing, let's just say, at a store, they're causing problems, most of the time, they end up in our jail," Sheriff Ricky Roberts said in July. "They need mental help; they don't need the jail help. That's not a mental facility out there."

Unpaid county taxes from the seller -- Warner Brown Building, LLC, according to a settlement statement provided to the News-Times -- in the amount of $46,953 brought the total amount paid by the county for the building down to $755,737.10 though the purchase cost for the hospital building was $800,000.

District 1 JP Mike Dumas also announced Thursday that $5,000 stipends for certified law enforcement officers in the county had arrived. The stipends were approved by the state legislature over the summer.

The county had to cover the Social Security matching and retirement on the bonuses, and JPs on Thursday appropriated $23,966 from the county's CARES Act budget for that.