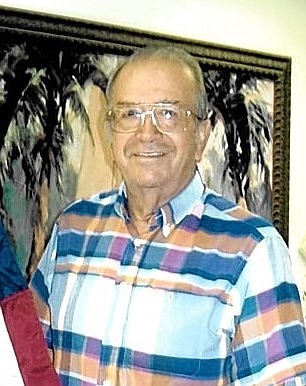 Billy Ray Webb, 84, of Lawson, AR passed away Wednesday, September 14, 2022 at his son’s residence in Lawson. He was born on March 11, 1938 in Lawson to the late Onie G. Johnson Webb and Minor H. Webb. Billy Ray grew up attending Lawson and Parkers Chapel Schools. After high school, he went to work as a travel salesman for El Dorado Coffee Company, serving 30 plus years until their closing. He was the owner and operator of Webb’s Grocery at Lawson for several years and co-owner and operator of Webb Family Farm for many years. He worked for Hudson Memorial Nursing Home in the maintenance dept for 10 years and drove a school bus for El Dorado School District, for 20 plus years before his retirement. After his retirement, Billy Ray enjoyed numerous camping trips with his family, having visited countless places throughout Arkansas and surrounding states. He enjoyed spending time playing dominos, bingo and visiting with friends at Champagnolle Landing and especially enjoyed watching Gunsmoke and Bonanza reruns. He formerly enjoyed deer hunting, trail riding and especially loved working his pair of mules to the wagon. He was a lifelong member of Lawson Baptist Church, former board member of Lawson/Urbana Water Assoc, a charter member of both Lawson Deer Camp and Lawson/Urbana Fire Dept. He was a wheeler dealer and was always doing deals to try and make a dollar, but would give the ones he loved the shirt off of his back.

He was preceded in death by his parents and by his wife of 49 years, Regina Gates Webb.

Survivors include; one son, Kenny Webb and wife Lana; one daughter, Brenda Honeycutt and husband Tracy all of Lawson; two grandsons, Preston Webb and girlfriend Erin of Lawson, and Austin Honeycutt and wife Linley of Parkers Chapel; two granddaughters, Julie Webb of Hampton and Kelsey Honeycutt of Parkers Chapel; four great granddaughters, Laken Osgood, Kenlee Honeycutt, Maddie Honeycutt and Stella Honeycutt; one sister, Patricia Goff Ward; two nephews, Danny and Jimmy Goff, all of Lawson. He is also survived by seven other grandkids and great grandkids, by marriage, including; Theresa Shojai and husband Fariborz of Houston, TX, Jim Sanders and wife Jill of Parkers Chapel, Shaadee Shojai, Tyler Sanders, Luke Sanders, Aiden Sanders and Megan Handly, all of whom he treated just like his blood family.

Visitation will begin at 1:30 pm, immediately followed by a funeral service at 3:00 pm, all on Sunday, September 18, 2022 at Lawson Baptist Church, with Bro. Don Travis officiating. Burial will follow at Liberty Cemetery under the direction of Bailey Funeral Home.

The family would like to sincerely thank; Wanda Sanders and Angel Eppinette for the care given to Mr. Webb during the last few months and weeks of his life. Special thank you to Dr. Greg Smart, home health and the 4th floor nursing staff at the MCSA for their compassionate care.