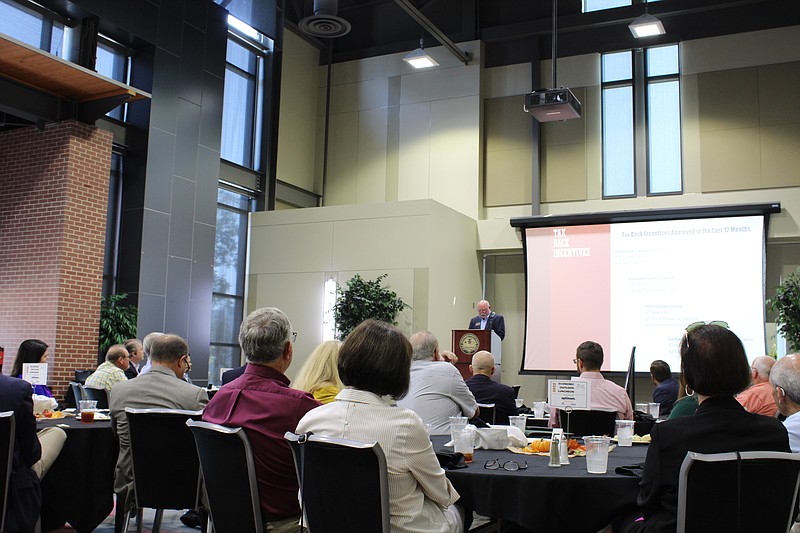 Unemployment hit near record lows in Union County in November 2021, when the St. Louis Fed recorded a rate of 4.3%. The only time in the last 22 years it was lower was in October 2000, when it hit 4%.

"My personal belief is that it's probably about the lowest unemployment numbers we'll ever experience here in town," Luther said.

As of July, the rate had risen slightly to 6.6% -- up from 5.6% in June --, but Luther said the data was skewed slightly due to a temporary shutdown at a local plant, when contractors were taken off the payroll for a couple of weeks.

"It is a squirrely way, the way they count our unemployment. They take one week out of the month, the Bureau of Labor Statistics. They survey unemployment records. They do interviews with people they select for eight weeks at a time," he said.

The other new project is a restaurant. Luther said the biggest difficulty new restaurants looking to locate in El Dorado face is the inability to find qualified management.

"There's several that would be here if they could have found people throughout the area that are capable of managing and that they could entrust the restaurant to. And that is a problem not just typical to us, but all over the state," he said.

No local economic development projects have been cancelled or eliminated this year, according to data from the Chamber.

Several recent industrial projects and openings have had an impact on Union County's economy as well, Luther said. From 60 new jobs becoming available with the opening of Continental Carbonics Products, Inc. to $20 million in upgrades at Resolute Forest Products' mill, the outlook for local industry is "very promising."

"Canfor Pine... They have also announced a $130 million expansion in Urbana, and once the expansion is finished, that should be adding another 170 or so jobs," Luther said.

The Chamber has authorized 54 certificates of origin -- designating that products were made in the United States -- so far this year and are on track to surpass previous years' numbers, and the 21 ribbon cuttings held so far in 2022 will soon surpass the 26 held in both 2020 and 2021, Luther said.

"Through the third quarter -- we're not even finished yet... We're sure we're going to surpass the last two years' numbers (in certificates of origin)," Luther said.

"A lot of members, pre-pandemic and during the pandemic, had dropped their membership levels back to the basic level, but now they're coming back up and joining at the Chairman's level or above," Luther said.

Read more about the event in Friday's edition of the News-Times.