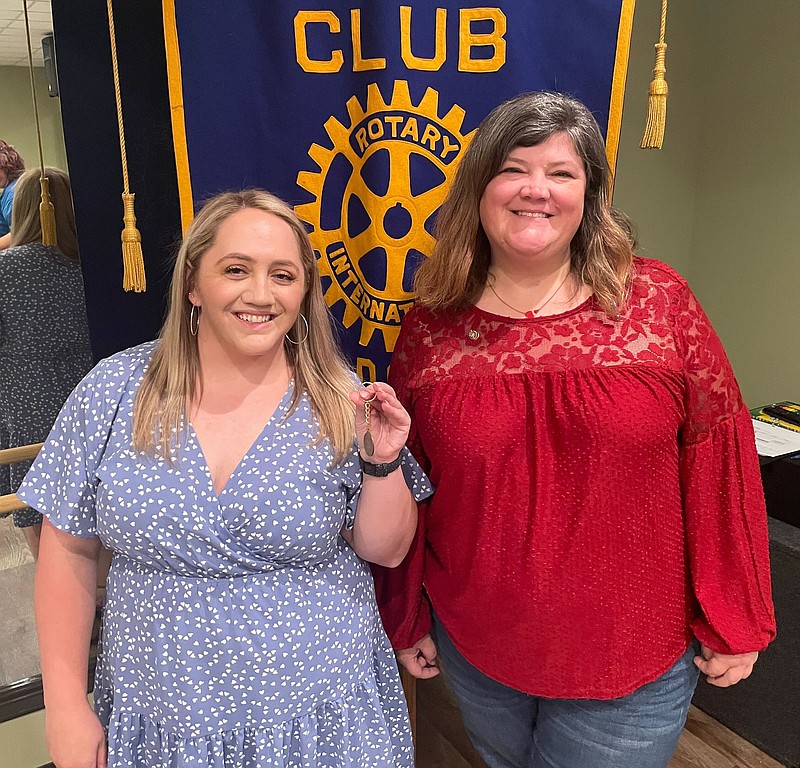 Raegan Sharp, public affairs liaison with the Arkansas Attorney General’s Office, with Karen Hicks, president of the Rotary Club of El Dorado. Sharp spoke at the club's meeting Monday at the Healthworks Fitness Center and gave a presentation about scams and identity theft. (Matt Hutcheson/News-Times)

Scams, whether by phone, mail or online, are everywhere.

The Federal Trade Commission reported in February that it received fraud reports from 2.8 million consumers in 2021.

Consumers, the FTC report states, reported fraud losses of more than $5.8 billion last year, an increase of 70% from 2020.

Dodging potential scams and fraud requires vigilance and on Monday, Raegan Sharp, public affairs liaison with the Arkansas Attorney General's Office, spoke at the Rotary Club to give an informative presentation about scams and identity theft.

Sharp went over several scams in her presentation and spoke about how to recognize and guard against them.

Some scams, such as business, money mule and online dating scams, rely on fooling victims into sending the perpetrator money through false pretenses.

Sharp gave one example regarding government imposter scams, which generally involve a fraudster posing as an employee of an agency such as the IRS.

Scammers will also sometimes do research before attempting fraud. Sharp said that family emergency scams often involve the perpetrator contacting the victim with the claim that one of the victim's family members needs immediate financial assistance due to an emergency.

Scammers in these cases may know some details about their target's family and will tell victims that the family member in trouble does not want anyone else to know.

Other scams, particularly phishing scams, rely on emails purporting to be from reputable companies or other ostensibly trustworthy sources requesting payment or other privileged information such as passwords or bank account info.

These emails or messages will often contain suspicious links and create a sense of urgency regarding payment or information.

Another common thread in scams is asking for payment in the form of wire money transfers.

"The biggest thing is that they want their money as fast as possible," Sharp said. Wire transfers are particularly preferred because they allow for transfer of cash, are widespread and easy to access.

Other common scam identifiers are requests for payment through payment apps, gift cards and cryptocurrency.

Tips for avoiding scams include not giving out one's name, address or other information to telemarketers; never wiring money based on an unsolicited phone call or email; never paying money to get money; and to look out for deceptive caller ID numbers.

Sharp also discussed common forms of identity theft and how to prevent it. Identity theft's purpose is commonly to access credit in the victim's name, Sharp said.

"One thing I (say) is to not keep your Social Security Card on you. If that number gets stolen that could be the most detrimental, they can do the most damage with that," she said.

Sharp said remaining vigilant about information kept in one's purse or wallet, incoming and outgoing mail, and in one's home or automobile can help protect against identity theft.

Victims of scams can file reports with the Arkansas Consumer Protection Office and the Federal Trade Commission. Online scams can also be reported to the Internet Crime Complaint Center.