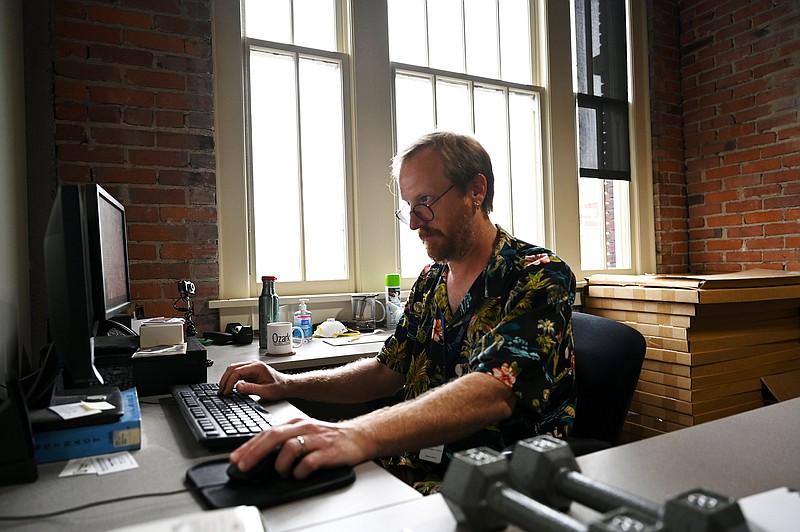 Guy Lancaster works on the new redesign of the online Encyclopedia of Arkansas at her desk in Little Rock on Friday, Sept. 2, 2022. (Arkansas Democrat-Gazette/Stephen Swofford)

Ever wonder what happened on this day in Arkansas history?

You can find out by going to the online Encyclopedia of Arkansas at encyclopediaofarkansas.net.

It's a daily feature on the website, which provides a plethora of information about Arkansas -- including the unusual.

Did you know there was a college at Tulip, Ark.? Or that the body of an unknown man who died in Prescott in 1911 was embalmed and kept on display for over 60 years?

Well, both are true, and you can read about them in the Encyclopedia of Arkansas, which is a project of the Central Arkansas Library System.

Since its founding in the early 2000s by Tom Dillard, then head of the Butler Center for Arkansas Studies in Little Rock, the Encyclopedia of Arkansas has become an invaluable resource for students, researchers and journalists.

Rex Nelson, a columnist and senior editor at the Arkansas Democrat-Gazette, said he uses the Encyclopedia of Arkansas on a daily basis.

"For those of us who love Arkansas history, there is no better source than the Encyclopedia of Arkansas," he said. "I think we now might have the best online encyclopedia of any state."

"The CALS Encyclopedia of Arkansas is a free, authoritative source of information about the rich history, geography, and culture of Arkansas," according to the "about" section online. "It is updated regularly to ensure the people of Arkansas have an accurate and accessible resource to explore our heritage."

Guy Lancaster, the current editor of the Encyclopedia of Arkansas, said they've got another 7,500 entries just waiting to be written.

Obviously, people don't do it for the money.

"We invite anyone to write for us -- students, retirees, they really run the gamut," said Lancaster. "Our motto is anyone willing to do the research can write for us."

The writing goes through a professional editing process that includes fact-checking, he noted.

Lancaster said the website has more than 100,000 users monthly. May is a particularly busy month, with school finals and papers being due. Last May, 165,651 people visited the website, racking up 198,045 sessions.

In a Google search for "steamboat disasters," the Encyclopedia of Arkansas comes up No. 1, noted Lancaster.

Arkansas has always been known for its disasters.

The Encyclopedia of Arkansas includes information that's not always readily available or easily accessible -- information that might be lost to the ether without some sort of digital mooring.

"I like to think we pull something out of the earth so people can use it," said Lancaster.

If people are looking for information about the Little Rock Nine or former President Bill Clinton, there are lots of resources, but if they want to know about the history of Y City in Scott County, the Encyclopedia of Arkansas is the place to go, he said.

During the Civil War sesquicentennial, the Encyclopedia of Arkansas was working on articles about small skirmishes around the state.

"A gentleman contacted us looking for where an ancestor was buried," said Lancaster. "One of our entries mentioned that he fought and died in this very minor skirmish -- the Skirmish at Cross-Roads in Independence County."

The man was put in contact with the article's author, who was able to point him to the field where the dead were buried.

"It's that kind of very local history that I am eager to develop," said Lancaster.

He began working as assistant editor of the Encyclopedia of Arkansas in 2005 and became editor in 2008.

A Jonesboro native, Lancaster has three degrees from Arkansas State University: bachelor's and master's degrees in English and a Ph.D. in heritage studies.

Lancaster said that, early in the pandemic, as classes started to move to remote environments, the online encyclopedia provided a crucial resource for both students and teachers.

"We fielded a lot of Arkansas-related inquiries from people who suddenly could not access printed sources of information in schools and libraries," he said. "And we could tell, from our analytics, that we had a lot more school districts using the website."

Lancaster said the website has recently gone through a redesign that improved the search engine and front page. It now includes a "Trending Entries" section and a "New & Updated" section.

The changes were funded in part by an $82,474 American Rescue Plan grant from the National Endowment for the Humanities. The grants were designed to stabilize cultural institutions during the COVID-19 pandemic. Lancaster said the cost of the redesign was closer to $25,000.

According to a news release from the Central Arkansas Library System, an Atlanta-based firm, Army of Bees, was hired to do the site redesign. The agency previously worked on the New Georgia Encyclopedia, the first digitally born state encyclopedia and one of the inspirations for the creation of the Encyclopedia of Arkansas, according to the release.

"Online encyclopedias are their own unique beast, and so it helps to have someone on your side who understands the challenges of building them," said Heather Zbinden, programs and website coordinator for the Roberts Library of Arkansas History & Art, where the Encyclopedia of Arkansas offices are located.

"We have been wanting to make some specific changes to the site for a long time, just to make it more user friendly," said Lancaster. "The surge in usage drove home the necessity of doing that, and the NEH grant made it possible."

The encyclopedia was initially funded by a grant from the Winthrop Rockefeller Foundation.

"Since it launched in 2006, the EOA has become the premier resource on everything related to Arkansas history and culture," said Nate Coulter, executive director of the Central Arkansas Library System. "These new changes will cement the position of the EOA not only within the state but also the nation at large."

More additions are forthcoming, including a way for users to submit comments on entries and have those comments included at the end of the entry for other users to see, according to the news release.

Earlier this year, thanks to a grant from the Arkansas Humanities Council, the Central Arkansas Library System was able to pay for the addition of the Google Translate tool, as well as hire Spanish-language translators to produce translations of the eight larger time period overviews.

In addition, a contractor was hired to add "alt text" to pieces of media. Alt text, or alternative text, is a short, literal description of an image that makes the internet more accessible for people with visual impairments, according to the news release.

The Dolores Bruce Endowment from the Arkansas Community Foundation has also made it possible to undertake some technical improvements to the site this year.

"As a public library system, we are all about accessibility, making available the information and tools people need to get by and succeed in our world," said Coulter. "The EOA is a measure of our ability to achieve that goal.

"In the past, Arkansas history was a niche subject, but that's no longer the case. The EOA makes Arkansas available to the whole world."

If you're wondering about that college in Tulip, it was called the Tulip Female Collegiate Seminary and later known as the Ouachita Conference Female College. It closed by the end of the Civil War.

And that unknown man in Prescott? He was known simply as Old Mike.

In 1975, the Arkansas Attorney General's Office asked Cornish Funeral Home to bury the body, which it did in a quiet ceremony on May 12 at the DeAnn Cemetery, according to the Encyclopedia of Arkansas. 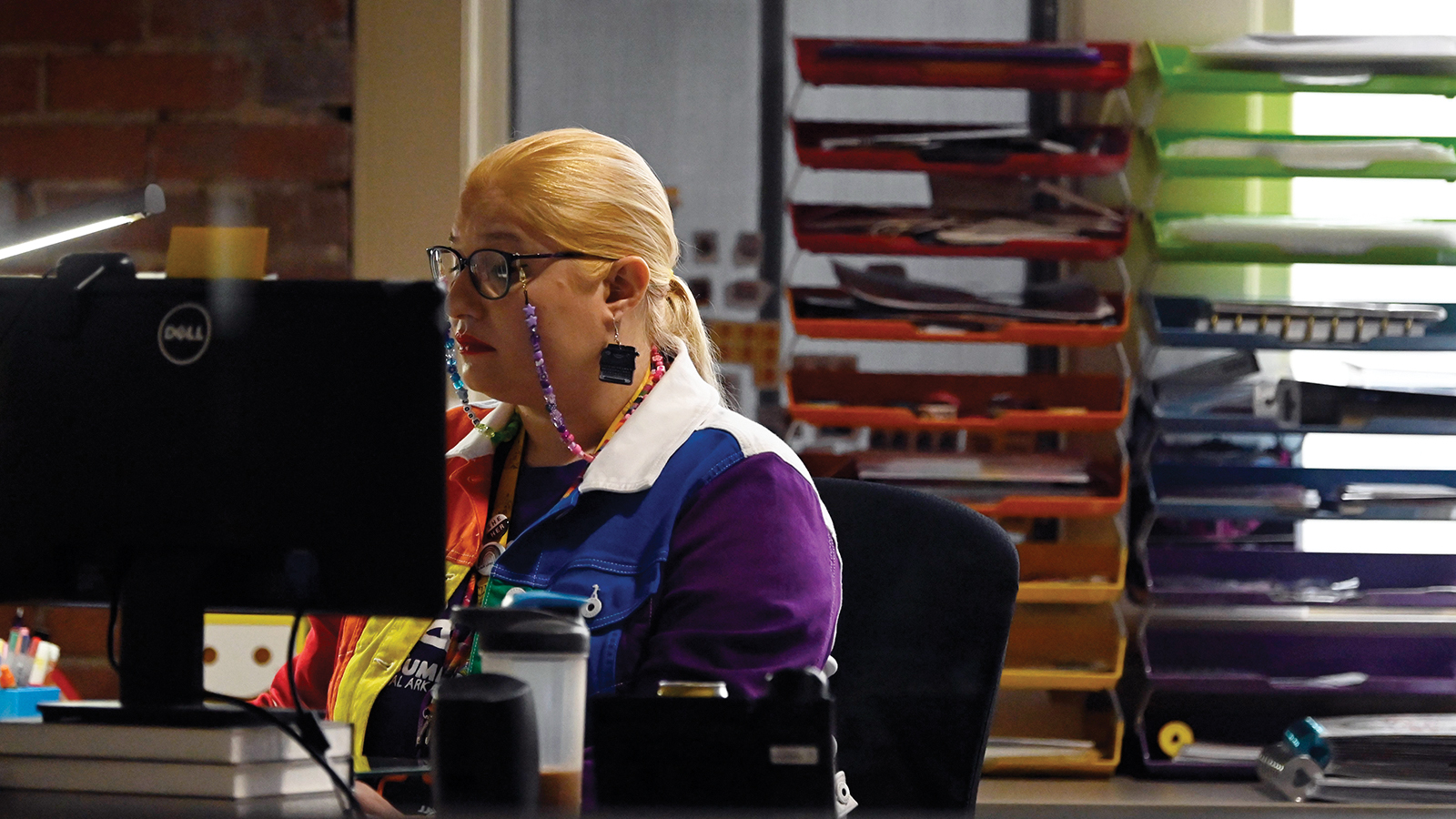 Jasmine Jobe, an editorial assistant, works on the new redesign of the online Encyclopedia of Arkansas at her desk in Little Rock on Friday, Sept. 2, 2022. (Arkansas Democrat-Gazette/Stephen Swofford)