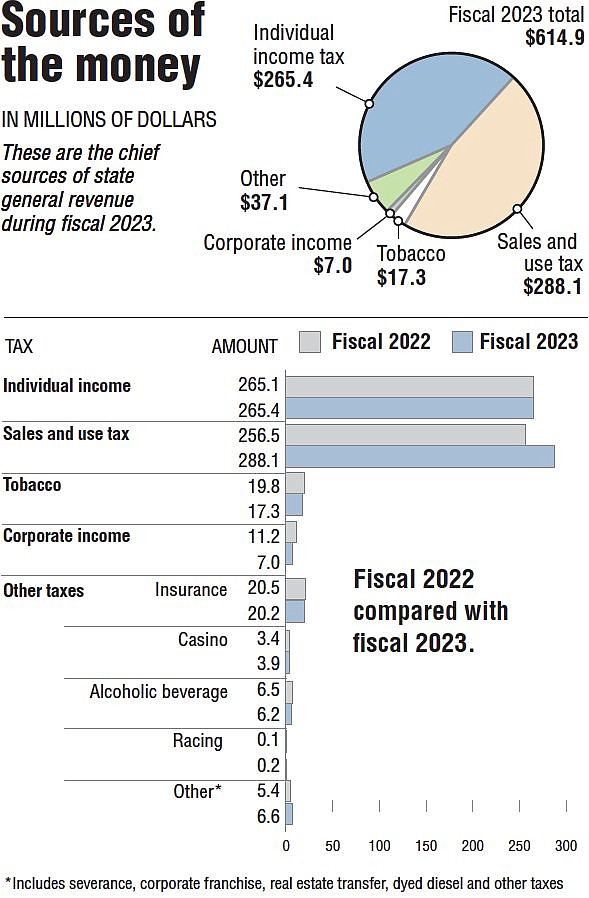 Arkansas' general revenue in August increased by $26.2 million, or 4.4%, from the same month last year, bringing the total to $614.7 million, according to a report Friday from the state Department of Finance and Administration.

The state's gross general revenue last month beat the forecast by $21.2 million, or 3.6%. The higher-than-expected revenue numbers for August were largely driven by an increase in sales tax collections, which totaled $288.1 million, an increase of $31.6 million, or 12.3%, from the same month last year.

The sales tax revenue reflects "continuing economic expansion" that was from multiple sectors of the economy, according to a summary of the report from the Department of Finance and Administration. Collections from the state's sales tax on motor vehicles increased by 8% in August this fiscal year.

"Sales tax collections growth remained high in August in accordance with other indicators of current economic growth in Arkansas," Larry Walther, secretary of the Department of Finance and Administration, said in a statement. "Resilience in the Arkansas economy is evident."

"Two months into the new fiscal year and the state has met and exceeded forecast each month," Hutchinson said in a statement. "This is encouraging news and the report shows the confidence of the Arkansas consumer that the state is on the right path. The combination of robust job creation and controlled growth in state government spending is working well for the state."

Total net revenue, which state agencies can use to spend under the Revenue Stabilization Act, was $542.1 million in August compared with $518.9 million this time last year.

John Shelnutt, the state's chief revenue forecaster, said it is difficult to predict what August revenue figures mean for the state's economy going forward because the Federal Reserve may continue to raise interest rates to tamp down inflation.

For the state, inflation and a low unemployment rate are contributing factors to the increased revenue collections, Shelnutt said.

A competitive labor market has led to an increase in wages, driving spending by consumers, Shelnutt said. Some of the state's increased revenue could be inflation with the consumer price index increase in June having the highest increase in a 12-month period since 1981, according to the U.S. Bureau of Labor Statistics.

"It's a tight labor market, very low unemployment rate," Shelnutt said. "That obviously has some influence on payroll incomes, and therefore consumer spending. But alongside that fundamental economic strength, we also have inflation that's also affecting prices."

"This is a normally light collection month for that category," Shelnutt said of corporate income taxes. "It really doesn't tell us much about the economy or corporate profits at this point."

The state's acceleration of a $500 million tax cut, which the General Assembly and governor signed off on during a special legislative session in August, have yet to have an impact on the state's revenue, Shelnutt said. The acceleration in the tax cut came as the state had a reported $1.63 billion budget surplus.

The revenue forecast made in May takes into account tax cuts the Legislature passed last year, but not the updated schedule lawmakers approved in August. The next updated revenue forecast will be in September.

"It's too early to incorporate them for August," Shelnutt said. "But it is going to be impacting the remaining months of the calendar year."

Total net revenue for the year to date was $1.08 billion, $50.2 million or 4.9% above the same levels last year. Two months into the fiscal year, the net available revenue is $46 million, or 4.4% above the finance department's projections.

"I think the main story in August was continued high growth in sales tax collections," Shelnutt said. "And the gain within sales tax was broad-based across the sales tax-reporting sectors."