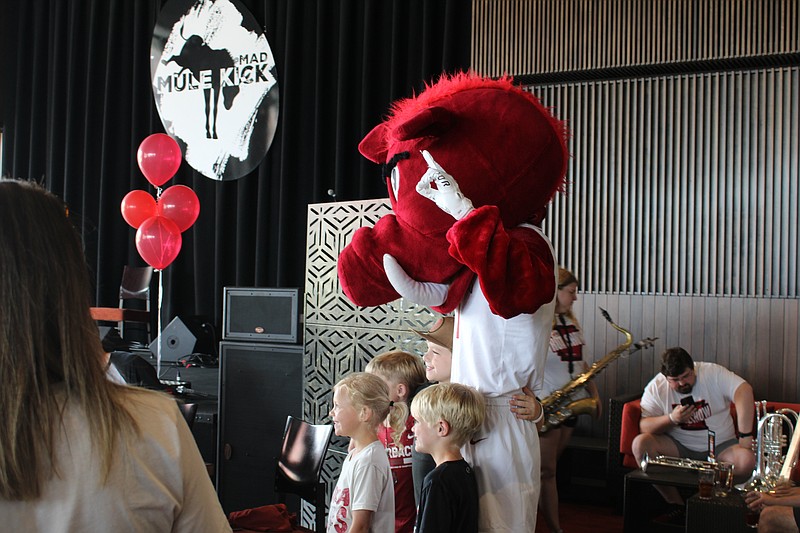 Big Red poses for a photo with fans during the ONE Razorback Roadshow at Mulekick at MAD on Wednesday, May 18. (Caitlan Butler/News-Times)

[email protected] has held its final evening service, the restaurant announced in a post on its Facebook page Wednesday.

"Even though our time in El Dorado has come to an end, we are grateful for the friends made," the post read. "Please support your local eateries and businesses, both in person and via social media. You have n idea the impact a visit, like, follow and reviews can make."

MAD Marketing Coordinator Joanna Benson said the closure came as a surprise, referring a News-Times reporter to Mulekick owner Christy Ouei. The News-Times reached out to Ouei but had not received a response by Thursday evening.

Asked what MAD will do to fill the restaurant space on the Murphy Arts District campus in downtown El Dorado, Benson said, "We are working on it and will let you know."

[email protected] first opened on Sept. 29, 2021. It replaced the Griffin, a high-end farm-to-table restaurant that opened alongside the rest of the MAD campus in 2017 and closed in March, 2020 amid the COVID-19 pandemic.

The original Mulekick location in Magnolia will remain open, according to the restaurant's Wednesday post.

Ouei said when [email protected] first opened that she planned to remodel the restaurant into a more “laid-back, hip space,” including adding fire pits outside along Locust Street and expanding the interior to allow for more seating and private dining areas.

Local residents expressed dismay about the announcement in the comments of [email protected]'s original post. The restaurant had played host to political rallies, community events and local musicians since its opening.

Answering commented questions, the restaurant said corporate and party reservations will be honored, and gift cards can be utilized at the Magnolia location.