Most Ukrainians left without power after new Russian strikes 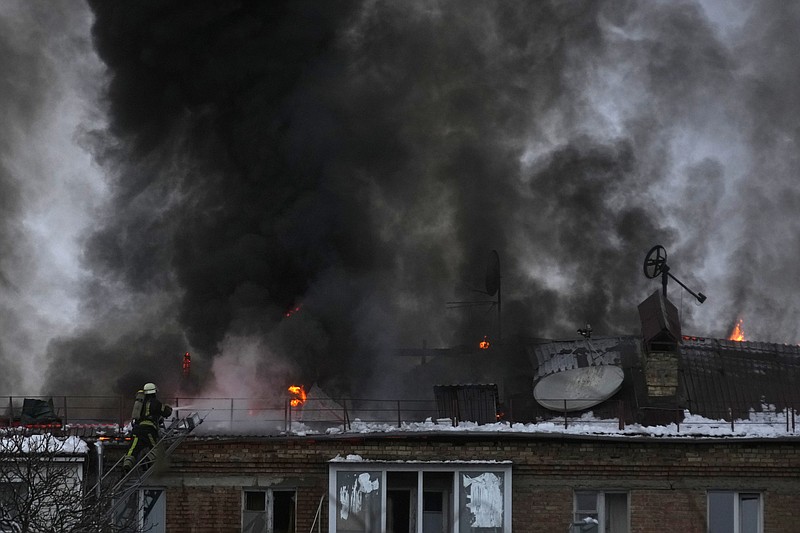 Ukrainian State Emergency Service firefighters work to extinguish a fire at the scene of a Russian shelling in the town of Vyshgorod outside the capital Kyiv, Ukraine, Wednesday, Nov. 23, 2022. Authorities reported power outages in multiple cities of Ukraine, including parts of Kyiv, and in neighboring Moldova after renewed strikes Wednesday struck Ukrainian infrastructure facilities. (AP Photo/Efrem Lukatsky)

By JOHN LEICESTER and SAM MEDNICK

Multiple regions reported attacks in quick succession and Ukraine's Energy Ministry said that "the vast majority of electricity consumers were cut off." Officials in Kyiv said three people were killed and nine wounded in the capital after a Russian strike hit a two-story building.

Russia has been pounding the power grid and other facilities with missiles and exploding drones for weeks and the energy system is being damaged faster than it can be repaired.

In the aftermath of the strikes, Ukrainian President Volodymyr Zelenskyy tweeted that he has instructed Ukraine's ambassador to the United Nations to request an urgent meeting of the Security Council.

"Murder of civilians, ruining of civilian infrastructure are acts of terror. Ukraine keeps demanding a resolute response of international community to these crimes," Zelenskyy said.

Before the latest barrage, Zelenskyy had said that Russian strikes had already damaged around half of Ukraine's energy infrastructure.

Rolling power outages have become the horrid new normal for millions -- and the latest barrage affected water supplies too. Ukrainian officials believe Russian President Vladimir Putin is hoping that the misery of unheated and unlit homes in the cold and dark of winter will turn public opinion against a continuation of the war but say it's having the opposite effect, strengthening Ukrainian resolve.

Kyiv Mayor Vitali Klitschko said Wednesday that "one of the capital's infrastructure facilities has been hit" and there were "several more explosions in different districts" of the city. He said water supplies were knocked out in all of Kyiv.

There were power outages in parts of Kyiv, while power was out in the wider Kyiv region, in the northern city of Kharkiv, the western city of Lviv, and in all or part of the Chernihiv, Kirovohrad, Odesa and Khmelnytskyi regions. In Moldova, Infrastructure Minister Andrei Spinu said that "we have massive power outages across the country," whose Soviet-era energy systems remain interconnected with Ukraine.

It was the second outage this month in Moldova. The country's pro-Western president, Maia Sandu, said in a statement that "Russia left Moldova in the dark." She said the future of Moldova, a country of about 2.6 million people, "must remain toward the free world." Moldova's foreign minister said the Russian ambassador was being summoned to give explanations.

Ukraine's state-owned nuclear operator, Energoatom, said the strikes led to the country's last three fully functioning nuclear power stations all being disconnected from the power grid in an "emergency protection" measure. It said they would resume supplying electricity as soon as the grid is "normalized."

The barrages started in October, with targets being hit early in the morning and power restored to many places by the evening. Wednesday's strike and another major round last week occurred in the afternoon on short winter days, leaving workers toiling to restore supplies after dark.

Wednesday's blackouts also caused "the largest internet outage in Ukraine in months and the first to affect neighboring Moldova, which has since partially recovered," said Doug Madory, director of internet analysis at network-monitoring Kentik Inc.

Medical workers' efforts have been complicated by the succession of Russian attacks on Ukraine's infrastructure.

Many doctors in the city are working in the dark, unable to use elevators to transport patients to surgery and operating with headlamps, cell phones and flashlights. In some hospitals, key equipment no longer works.

The European Parliament on Wednesday overwhelmingly backed a resolution labeling Russia a state sponsor of terrorism for its invasion of and actions in Ukraine. The nonbinding but symbolically significant resolution passed in a 494-58 vote.