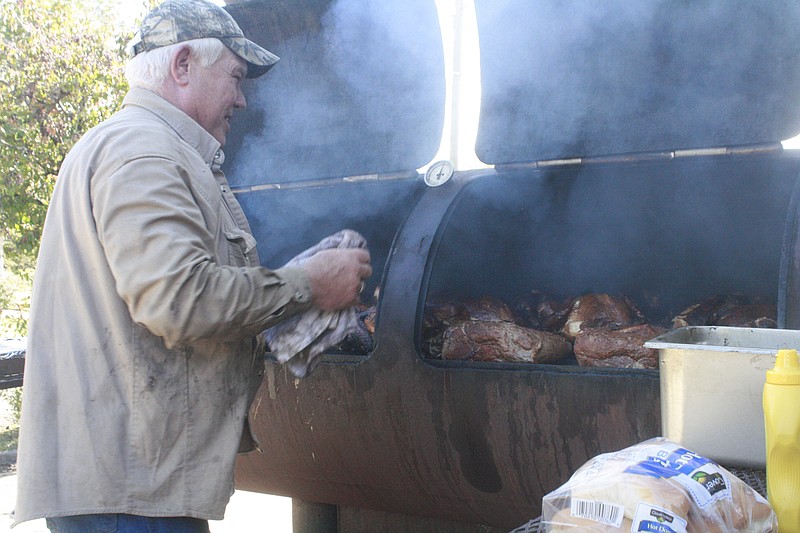 Bruce Green, who has smoked turkeys for almost 3 decades for the Salvation Army's annual Thanksgiving meal, checks his smoker on Tuesday. The meal will be held at the Salvation Army from 10:30 a.m. to 12:30 p.m. tomorrow. (Matt Hutcheson/News-Times)

The El Dorado Salvation Army will host its annual Thanksgiving dinner tomorrow from 10:30 a.m. to 12:30 p.m.

On Tuesday, Bruce Green, who is on his 29th year performing the service for the organization, smoked 38 and deep fried eight turkeys and planned to cook as many as 80 leg quarters for the meal.

Green said he started around 6 a.m. Tuesday morning and expected to wrap up by 6 or 7 last night.

"Whatever it takes," Green said.

The yearly free community meal is made possible by community donations and volunteers.

Maj. David Robinson emphasized on Tuesday that the Thanksgiving meal is open to the public. Diners can stop by the Salvation Army to eat or request meal delivery.

Those who want a Thanksgiving meal delivered on Thursday should call the Salvation Army in El Dorado before it closes at 4 p.m. today at 870-863-4830.

The Salvation Army kicked off its seasonal Red Kettle Campaign last week during the downtown Holiday Lighting Ceremony with a goal to raise $70,000.

Robinson said Tuesday that the organization is always looking for more bell ringers throughout the holiday season.

During his campaign kick-off announcement last week, Robinson said the Salvation Army locally has served 30,000 more meals and handed out 12,000 more food boxes this year than they had by the same time last year, a substantial rise in demand that increases the organizations need for donations and volunteers.

Volunteers can sign up for the Red Kettle Campaign at registertoring.com.