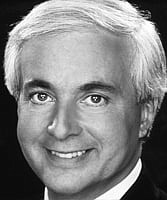 When it comes to sappy holiday movies, you either scorn them as you would another pair of reindeer-themed socks, or you eagerly binge on offerings such as "My Southern Family Christmas," produced by Hallmark and described thusly:

"Under the guise of a journalist, Campbell has a chance to get to know her biological father for the first time -- without him ever knowing who she really is. ... Campbell must decide if she's going to keep her identity a secret or reveal the truth to her father -- a decision that will change their family Christmas forever."

You can't make this stuff up. Well, actually, you can if you work at Hallmark, which for the third straight year has managed to produce a cache of 40 highly-profitable holiday movies. Since imitation is the sincerest form of television (a line credited to Fred Allen), it's not surprising that 27 different networks and streamers have jumped in this year and combined to produce a record number of largely lookalike holiday films. The industry-wide total is a remarkable 158.

For Hallmark, it's the most wonderful time of year in terms of ratings and revenue. I estimate that the company spends a bit over $100 million to produce its Christmas films, many of which are shot in Canada to reduce costs. The Hallmark Channel reportedly reaps about one-third of its annual revenue from the 40 projects, or about $350 million, and this year it partnered with NBC to stream its movies on Peacock.

Leading the pack in popularity so far is "Falling for Christmas" on Netflix, which was gifted with more than 31 million views in its first four days. The draw probably isn't the tired plot (a woman with amnesia falls for a handsome stranger at Christmas) but rather the return of actress Lindsay Lohan after years away from the screen.

The upstart Great American Family channel produced 18 Christmas films this year and managed to stir some controversy. The service is run by Bill Abbott, a former Hallmark exec, who lured one of holiday filmmaking's biggest stars, Candace Cameron Bure, away from Hallmark to produce and star in Christmas movies that were less secular than the sort Hallmark favors. "I knew that the people behind Great American Family were Christians that love the Lord," Bure said in an interview, "and wanted to promote faith programming and good family entertainment."

Hallmark, meanwhile, is aggressively broadening its holiday storytelling and next month will offer "The Holiday Sitter," its first Christmas film with an LGBT love story. Bure caused a fuss on social media after saying she isn't keen on such themes.

The Lifetime channel is releasing 26 holiday titles this season. My favorite, at least based on the blurb, is "Santa Bootcamp," in which an event planner named Emily is sent off to holiday bootcamp and meets "a drill sergeant with a heart of gold, who helps Emily rediscover the magic of Christmas and find romance along the way."

Even the shopping channel QVC has produced a holiday film, "Holly and the Hot Chocolate," about a food critic who finds herself stuck in the small town of Pine Falls at Christmas. But wait, there's more! QVC is selling a special hot chocolate in partnership with gourmet retailer Serendipity.

How much holiday film fluff can viewers handle? So far, ratings are substantial, ad revenue is robust, and currently -- perhaps due to economic and political malaise -- the appetite appears almost limitless for formulaic fare that seems to get viewers where they want to go.

The frenzy is so great that TV is even making a Christmas movie about making a Christmas movie. "When a holiday rom-com movie shooting in her town needs a costume designer, Kerry, a local shop owner, steps into the role," says the blurb. "She rediscovers her passion for costume design and finds herself falling for Brad, the film's famous leading man."

Hallmark calls this film, "Lights, Camera, Christmas!" which pretty much sums up the holiday viewing season.