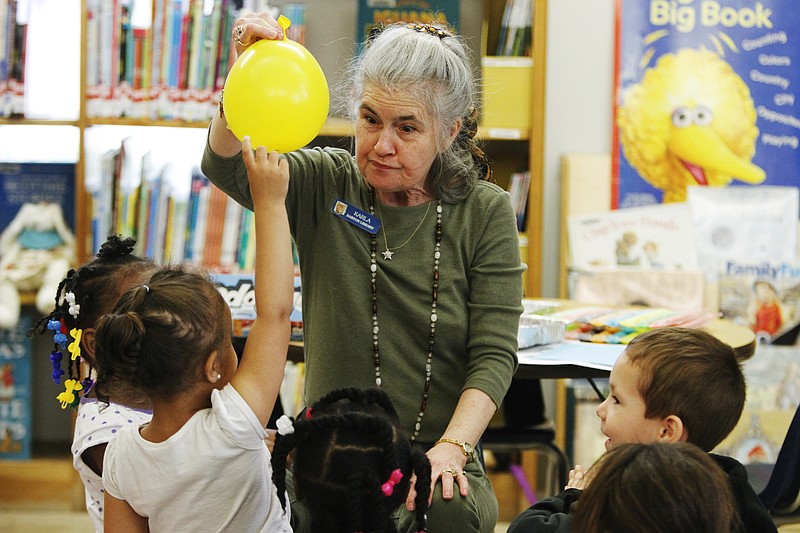 Karla Nelson teaches children the properties of matter during Storytime at the Barton Library in April 2016. The children's librarian was fired last week, and some local residents have started a petition for her reinstatement. (News-Times file)

Karla Nelson, longtime children's librarian at the Barton Library, was fired from her position last week.

Michael O'Connell, executive director of the Union County Public Library System, confirmed Nelson's firing in an email on Monday morning. In a phone interview Monday afternoon, he said she was let go "primarily for budget reasons."

"That's about all I'm allowed to say," he said. "(We're) just hoping to keep going forward and hoping to use some of the money we saved to keep doing more in the future."

Nelson, however, said she believes her dismissal stems from a dispute with another library worker that occurred in August. Since then, she said, her position at the library has deteriorated, and ultimately ended with her firing last Thursday.

It all started when Nelson asked another employee to find where a photo of the UCPLS' summer reading program's top reader had been published in the El Dorado News-Times. Aaron Bennett, who read 240 books for the summer program, was recognized by the Parkers Chapel School Board on August 9, and the photo appeared on the front page of the August 12 edition of the newspaper.

The employee told Nelson she couldn't find the photo, Nelson said, but later, another library employee showed her where it had published. Nelson subsequently called a meeting between herself, a human resources (HR) employee, O'Connell, the employee she'd asked to find the photo and the employee who ended up finding the photo.

"I asked her, 'how did you miss this, on the top half of the page? It's right there above the fold, how did you not see the picture?'" Nelson recalled. "I said, 'if you didn't see it, you either can't read or you're incompetent.' When I said that, she started screaming and yelling at me, wiggling her shoulders, waving her arms around. She stepped forward toward me aggressively. I was sitting in a chair, and the director (O'Connell) did absolutely nothing for the correction of that."

Soon after, the library's Board of Directors had a meeting, Nelson said, where they went into executive session, a closed portion of the otherwise public meeting, typically where personnel matters are discussed.

"Things were said about me that I don't know what they were. No one will tell me," Nelson said.

The following day, O'Connell called Nelson into a meeting with himself and an HR employee, she said. There, he told Nelson that she would no longer be a manager, her security code at the library would be revoked and she was no longer permitted to talk to other employees.

"He said if you need something for them to do, you have to come through me, and I will go tell them what you said," Nelson said. "I said, 'Mr. O'Connell, if you want the management position so bad, you can have it,' and he reached across the table to this letter he had written (outlining the changes to Nelson's employment), balls it up and said 'OK' and walked off."

The next month, Nelson asked the library's Board, during their regular meeting, what happened at the previous meeting that resulted in the changes to her position. Citing the privilege of the executive session, Board members declined to tell her anything, she said.

"So this is the way it's been since August. I've been in my room, I don't have people I can talk to," Nelson said.

In the General Election earlier this month, voters rejected a proposal to raise the millage rate Union County residents outside the City of El Dorado pay from .4 mills to 1 mill. After the election, O'Connell said "all options are on the table" as library officials rework their budget.

Nelson said she was approached by O'Connell and the president of the UCPLS Board last Thursday. Ken Goudy holds the position of president on the board.

"Thursday, he walks in, he and the president of the library board, walk in my room and he says since the millage didn't pass, we're going to cut the budget 10%. I said OK. And in the next breath, he says 'by the end of the day, I want all your personal stuff out of here,'" Nelson said.

"He said, 'you're being laid off,'" she continued.

Goudy said on Monday afternoon that he couldn't comment on personnel matters, but invited the community to attend the next meeting of the UCPLS Board meeting on December 6.

"We need to find a bigger venue. It's a public meeting, so anyone who wants to come, can," Goudy said.

Nelson said she doesn't believe the failed millage vote played a part in her termination.

"This had nothing to do with the millage. This was a personal issue," she said.

Nelson said she was employed at the Barton Library for eight years as of August. During her time there, she ordered books, organized the annual summer reading program, including gathering sponsorships, and held "Story Time" three times a week before the COVID-19 pandemic. She was back to holding Story Time twice a week by the time she lost her job.

"I volunteered for Main Street around the square to read as an elf, and Project SOUTH, I worked with them. I would schedule programs and movie events for the kids, would invite kids from other areas who would come in for field trips," she said. "I went out to schools, read to daycare centers like Morning Star... I did a lot of outreach."

A retired school teacher, Nelson said she didn't work at the library for the money, noting that her salary was $35,000 annually. Instead, she did it because she loved working with children. In the afternoons, between helping children select books and check them out and overseeing Story Time, she'd also tutor children.

"(It was) just my desire for the kids, to help them become the best individual they can become and to get the best education someone can give them. It's wonderful to see the little light bulb light up in their eyes when they finally get a concept you've been working and working on," she said.

Now, some local residents are hoping to convince the UCPLS Board to consider reinstating Nelson. Joy Stewart, a parent whose daughter attended Story Time starting in 2017, started a Facebook group last week where she's been rallying the community to write impact statements about Nelson's influence in their lives,which she said she hopes to present at the next board meeting.

"Ms. Karla Nelson's literacy work in Union County, Arkansas is unparalleled. I am an eyewitness to her dedicated work throughout the library over the years," she said in a written statement. "She is a major reason my why my child not only reads well but also continues to demonstrate reading comprehension above her age and grade level."

Stewart, who said she didn't have first-hand knowledge of the circumstances around Nelson's termination, highlighted some of Nelson's work that she found most impactful, including the design of the children's section at the Barton Library, which she said "accounted for the exponential participation growth in youth programs (Nelson) meticulously designed, but also anticipated the increase in noise level in consideration of older patrons" and which she noted was accessible to disabled patrons and organized with children – and their small size – in mind.

"There were many occasions where I was able to simultaneously work on time-sensitive projects on my laptop while having my child in plain view enjoying immersive educational activities tailored to her attention span," Stewart said.

Nelson was also attentive to individual children and their families, Stewart said, and welcomed all who walked through the library's doors.

"Her non-discriminatory warm welcome fostered friendships between moms," Stewart said. "Her decades of experience as a former teacher in the community make her uniquely qualified because she is directly familiar with common challenges to learning. As a result, she provides great insight and support for parents and teachers to help identify literacy needs early in development."

At next month's board meeting, Stewart says she and other members of the Facebook group plan to present any impact statements the community writes on Nelson's behalf, as well as a petition asking for Nelson's reinstatement. As of Monday afternoon, Stewart said the petition had already garnered more than 700 signatures.

She emphasized that those from the group wish to approach the board respectfully.

"We hope that each board member is more intimately aware of the deep and direct impact Ms. Karla's service had on the day-to-day operations of the library and the community as a whole," she said. "We'd like to know how we can better support their efforts to prevent operation interruptions."

But, they are hoping for an explanation if the Board declines to reinstate Nelson immediately.

Those who wish to sign the petition for Nelson's reinstatement or submit an impact statement can do so at the Ms. Karla Nelson Advocacy Group page on Facebook.

"We seek to express the massive void left in her absence and want to organize efforts focused on advocating for Ms. Karla Nelson. The focus is on productive and positive progress toward her reinstatement," she said.

The group is also working to organize a livestream of the UCPLS Board meeting in case there is not enough space for everyone who would like to attend or for those unable to attend in-person.

"The same children who have been directly impacted by Ms. Karla's youth programs are growing into young adults. One day they in turn will be patrons of the library bringing their own families to benefit from the programs she implemented years prior. Consequently, the continuation of her dedicated work is paramount to the future operational success of Barton Library and graduation rates in the community," Stewart concluded.

Nelson said she has been moved by the community's outpouring of support since her firing.

"I would love for the parents and the children to come up and attend that Board meeting and I would like to thank all the parents that have been involved with setting up these petitions and trying to get me reinstated. That shows me how much the community loves me, and I love them back and I appreciate all of their support," she said.

O'Connell said Story Time is set to resume with volunteer and staff readers in December. He said updates about the Dec. 6 Board meeting will be posted at ucpls.org and the Barton Library Facebook page. 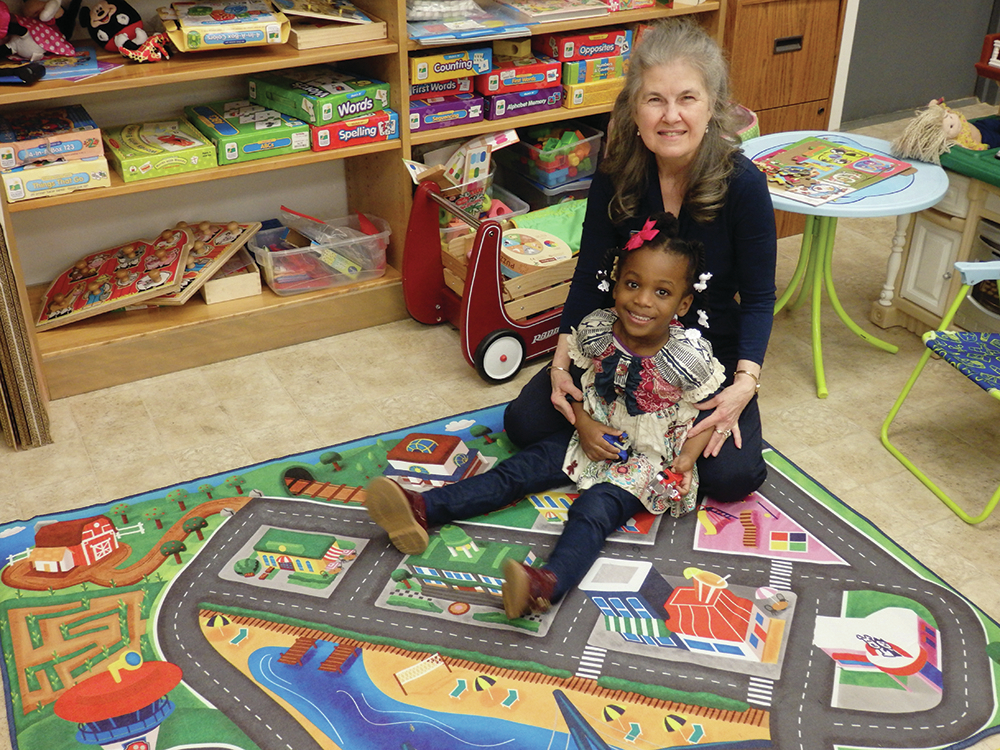 Karla Nelson poses with Truly Stewart on a rug donated by she and her mother Joy. Joy Stewart is helping to lead the effort for Nelson's reinstatement as children's librarian at the Barton Library. (Contributed)