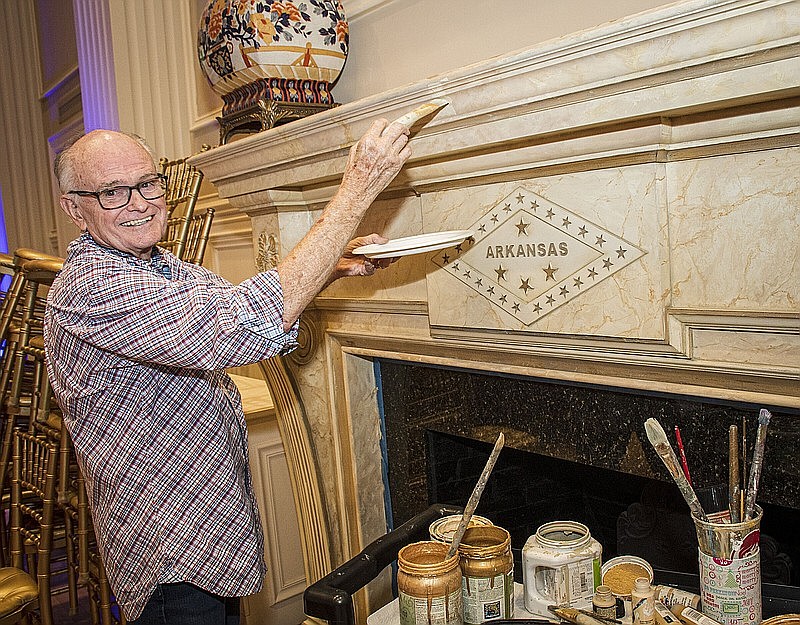 “I am what I am today through the training and all the experiences I have been privileged to work on. I’m so grateful for the choices I have made through God’s leadership.” -Tim Morris (Arkansas Democrat-Gazette/Cary Jenkins)

On a recent Monday afternoon, Conway artist Tim Morris was found standing in front of one of the large fireplaces in the Great Hall of the Arkansas Governor's Mansion, precisely painting the mantel to look like stone.

The only giveaway that it was wood -- and not marble -- was to run your hand across it.

At age 84, Morris is still doing all of the painting on his own, though he does now have a helper.

"I finally got to the point where I need an assistant -- not another painter -- I don't want another artist. I just want them to help me and be sensitive to what I am doing. Somebody said, 'Why don't you hire another artist?' And I said, 'I don't want to train someone to do the painting. That's me.'"

Morris taught art for 18 years at the University of Central Arkansas in Conway before retiring in 1989. Through his company Classique Expressions, he does artwork commissioned by clients across the country.

"Tim has always been one of the easiest people to work with on any project," former first lady Janet Huckabee says. "When imagining the art for the Grand Hall, I simply had to express my thoughts and he captured my every vision. Tim is talented, expressive and genuine, and I am happy to call him my friend."

But perhaps his biggest fan is current first lady Susan Hutchinson, who recommended a story on him.

"I'm thrilled for him to be put in the spotlight as he is the unsung artist extraordinaire behind the beauty, artistry, decor and especially executing various Christmas scenes," she says. "He translates my ideas for Christmas decor into reality with the stroke of a brush, designs by pencil and a creative mind."

In the Great Hall, Morris' work is reflected everywhere -- from paintings and murals to the detailed work he did on the walls and ceiling.

"When this ballroom opened up, it opened up stuff in my mind artistically that could be done to make it beautiful," he says.

For example, Morris saw the speaker grills at the front of the room as "two great big blank canvases to me."

Susan Hutchinson says, "The gold foil he applied to the stately columns of the Janet Huckabee Grand Hall is the most outstanding touch of grandeur to date."

"He is gifted in the visual arts, music, design and decor. Disgusting that one person can do all that! Makes the rest of us look like slackers," the former governor jokes. "He truly is an exceptional artist and visionary, but perhaps even more importantly he is a gracious, humble and caring human soul."

For the last four Christmases, Morris has decorated the mansion with art, including the two-panel giant mural of Spavinaw Creek in Northwest Arkansas where Asa Hutchinson took Susan on one of their dates.

Asa Hutchinson has said he believes that trip caused his wife to fall in love with the state.

"The governor loved what he saw, and the memory that he had, and he shared that story at every event," Morris says of the 2018 Christmas theme.

Morris worked on the painting at his studio in Conway. At the mansion, the art was cut in half and installed on each side of the ballroom.

"It creates a nice look when you are coming down the stairs. We do something usually to the columns that sort of optically draws your attention to the painting," Morris says "That year, we put up some trees that were sprayed white to look like snow. So we brought that snow illusion closer to you."

After that Christmas season, the Spavinaw Creek painting was taken down, rolled up and stored on the floor of Morris' studio for several years. It now resides in the carriage house on the mansion property. A frame is being built so it will hang over Morris' Arkansas Traveler painting for this year's holiday season. Trees and shrubs will be installed below, creating "a diorama effect of walking into it."

Last year, Susan Hutchinson asked for a theme of the history of Santa Claus.

Morris and fellow artist Mary Lynn Nelson worked together to select photos of Santa through the years and had them enlarged to billboard size by a Conway sign company. The walls were filled with Coca-Cola Santa Claus, Renaissance Santas and more -- eight total.

"As an artist myself, I learn something every time I am with him," Nelson says. "He's just such a nice man and such a worker. He really has a great work ethic. We can work at the mansion doing everything we have to do, and he might still leave there and go work on a job he has in Little Rock."

Nelson adds that Morris is "fearless," saying she saw him a few days before and he was up on scaffolding, working on a project at the mansion.

"He flat has the energy," she says. "Age certainly makes all of our bones creak and all of that, but he does have the energy."

A WEEK AT THE BEACH

Morris is paid a small stipend for his work, and the mansion buys his supplies -- but he says he is not getting rich off of it. He makes his money through private clients. Earlier this fall, he spent a week in Seaside, Fla., working for a Rogers couple. He had already adorned four of their Northwest Arkansas houses -- two in Rogers and two at Beaver Lake.

He was commissioned to create a painting of the exterior of their home and stayed in their third-floor guestroom, where he woke up each morning looking at the Gulf with nothing obstructing his view.

"They didn't want me to do it from pictures, so I had seven days to come and they would take care of me, and I would paint and then they would fly me home. I had a grand time. It was wonderful."

The seven-day deadline "worried me when I started. But I am fast when I get a project started. I am slow to get started sometimes but I usually work well under pressure."

He was born in Tulare, Calif. When he was in fifth grade, his parents moved back to his mother's home state of Texas. In the seventh grade, the family moved to Vernon, Texas, where he graduated from high school. His father was a housepainter and his mother a homemaker and waitress.

"I was not a good student. ... I felt uncomfortable in school because I didn't fit in as a person who was getting good grades. I wasn't athletic. I was just there," he says.

In the seventh grade, he took an art course and the class worked on creating pieces for a fire prevention poster contest. His teacher, Mrs. Lovelady, encouraged him to enter his drawing in the contest. He won first place.

"That jarred something in me that made me realize, hey, I do have a little worth after all."

He got an associate's degree from a junior college in Sacramento, Calif., and planned to go to the Chouinard Art Institute in Los Angeles where he had been awarded a $500 scholarship. By that time, he had met his wife, Jane, at Sacramento Central Church.

But he realized the school had a liberal atmosphere, and he didn't like working on psychedelic art.

"As I reflect back, I can remember how I didn't think I would fit in. Through some God-directed circumstances I was led to Bob Jones University, where I received a great education academically and artistically with a spiritual background.

"I am what I am today through the training and all the experiences I have been privileged to work on. I'm so grateful for the choices I have made through God's leadership."

He and Jane continued dating long distance for four years -- mostly through letters -- before they married, the day after Christmas 1959.

After they wed, Jane took a job at the administrative building at Bob Jones, and Morris got his art degree. To obtain his master's degree in art education, he built the sets for a production of Shakespeare's "The Tempest." The sets were atop a 22-foot, round turntable that represented the island where a sinking ship washed up. He placed the set for the ship in front of the orchestra pit.

He was hired to work at Bob Jones University's Unusual Films department -- yes, Unusual -- where he worked on sets for Sunday vespers, an annual opera and films like the Civil War movie "Red Runs the River."

One time during his work, Morris fell 15 feet into the orchestra pit while trying to move a rock. He broke both elbows and his left knee. He wound up in a wheelchair. He and Jane lived on campus in a dorm for married couples, and the dining hall was a long walk away.

"Here I am in this ugly 1935[-era] wheelchair -- it was wicker and tall in the back. ... Jane had to push me to the dining room, up and down curbs. It seems like a mile -- maybe it wasn't quite that far. She was glad when I was able to walk again."

At one point, he and Jane decided to move back to Sacramento where he took a job as a sign painter for a drugstore. About a year later, he got a job as an art teacher at a junior high school where he taught for about five years before moving to a new junior high in Rancho Cordova, Calif. In the summers, he painted murals for the California State Fair.

He had taught at the new school for about two years when he was asked to return to Bob Jones to work on the 1971 movie "Flame in the Wind," about the Spanish Inquisition.

"So I came to Conway, interviewed and never left," Morris says.

While at SCA/UCA, Morris obtained an Arkansas Arts Council grant to do a mural on the exterior wall of Franklin Paint Store in Conway. He and some of his students created the mural, depicting different businesses of yesteryear. It was his first piece of public art.

Another one of his murals in Conway, depicting a preacher with his son on his shoulders, a dog chasing a cat and an arbor, was ruined when someone hired some painters to "restore" it. Morris happened upon them while they were doing the work.

"It was the ugliest thing," he says of their work. "It made me so mad. I just couldn't believe that someone would paint it."

Morris went into the store where the mural was painted and asked the owner why he didn't call the artist for the restoration.

"He said, 'We didn't know who it was.' And I said, 'Well, I am right here.' I was so aggravated I could spit. They just ruined what was there."

But his work at the mansion will live on, Susan Hutchinson says.

Saying Morris' touch is "everywhere around us here," the first lady mentions his oversized pair of Arkansas Traveler paintings, which hang in the mansion's atrium, and his design of the mansion's 70th anniversary blown-glass Christmas ornament.

"His work has and will continue to engender awe and pride for all Arkansans who gaze upon his work for years to come," she says.

So how long will Morris continue to work? 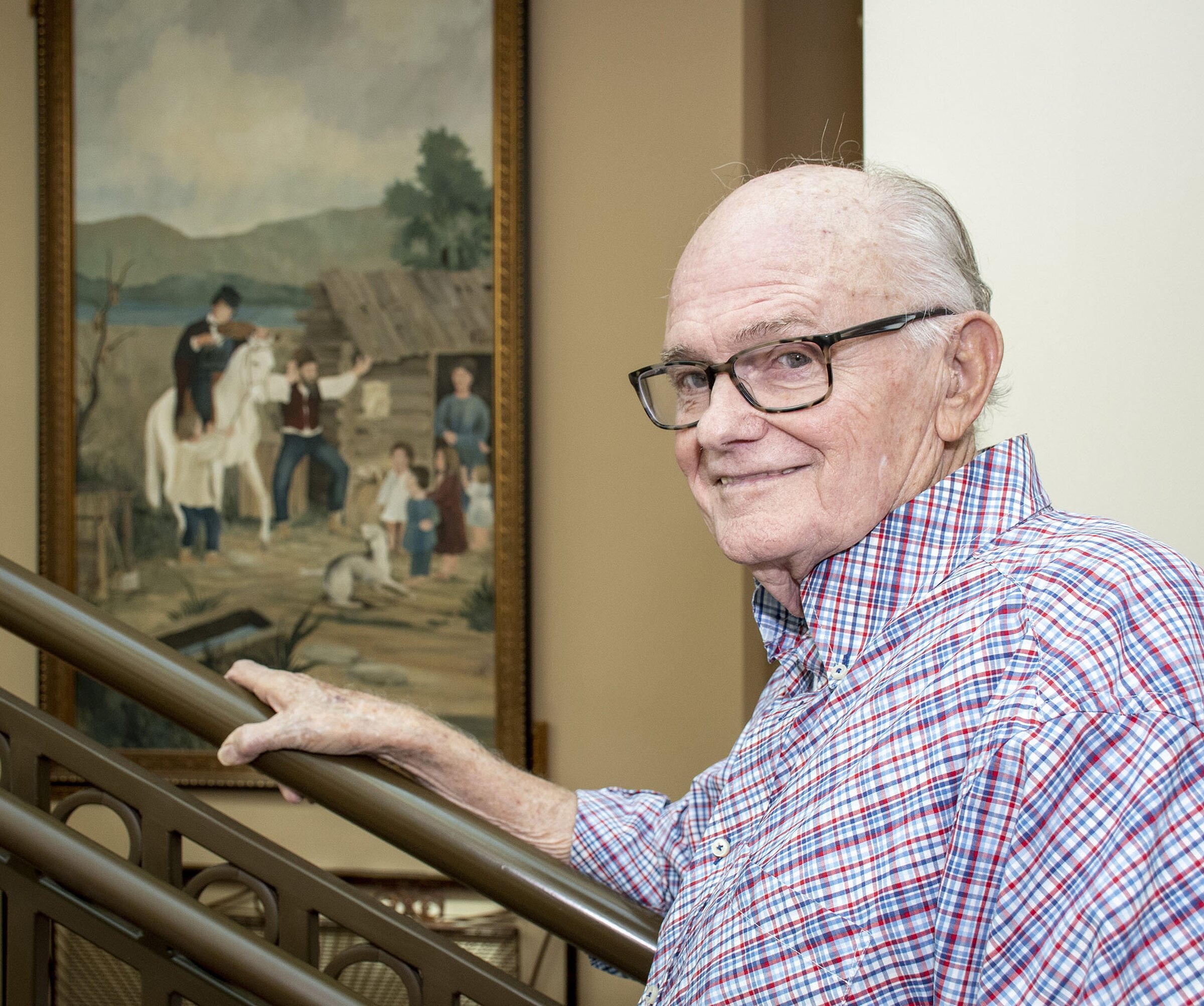 “I finally got to the point where I need an assistant — not another painter — I don’t want another artist. I just want them to help me and be sensitive to what I am doing. Somebody said, ‘Why don’t you hire another artist?’ And I said, ‘I don’t want to train someone to do the painting. That’s me.’” -Tim Morris (Arkansas Democrat-Gazette/Cary Jenkins)