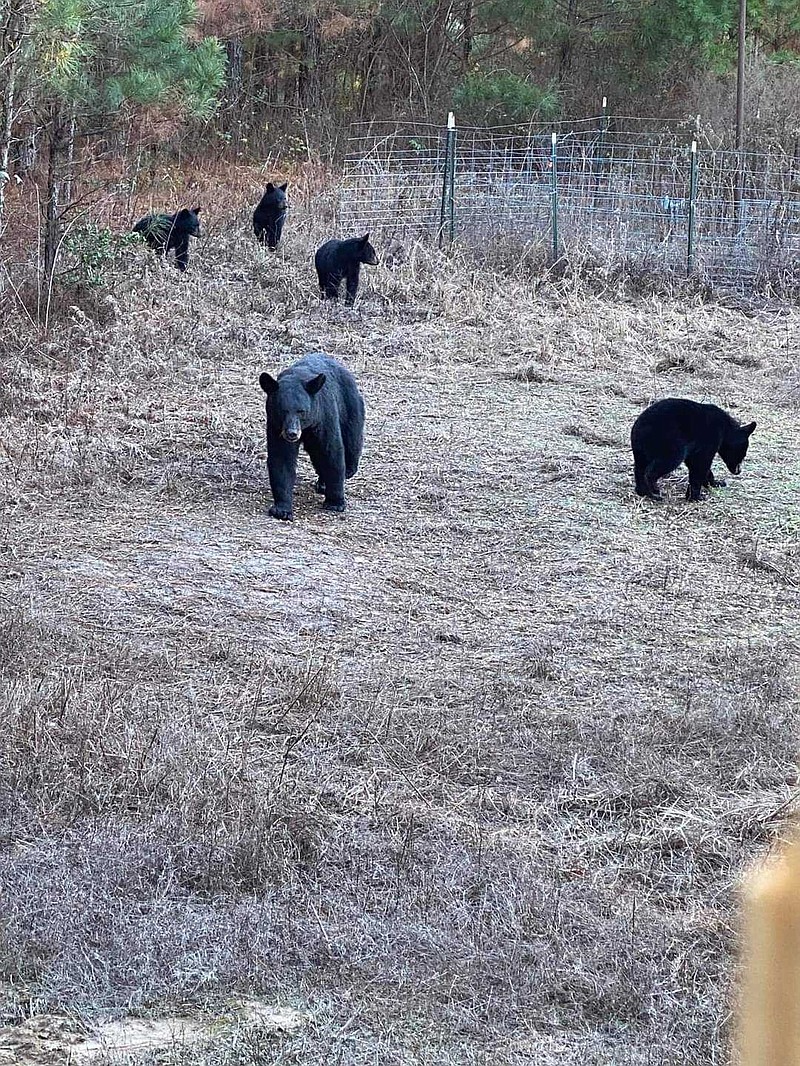 A family of bears walks near Jerry Sepulvado's deer stand at the LaPere hunting club in Union County on Saturday, Nov. 12. (Courtesy of Jerry Sepulvado/Special to the News-Times)

A Louisiana man recently had to share a deer he hunted in Huttig with a family of black bears.

Jerry Sepulvado, of Calhoun, Louisiana, is a member of the LaPere hunting club in Union County. He knew last Saturday, Nov. 12, when he headed out to hunt that there were bears in the area, including a family that appeared to be comprised of a mama bear and four cubs.

"We had pictures of this mama bear and her four cubs earlier in the year and then I saw them a couple weeks ago," he said. "Black bears, they get pretty common in Arkansas and Louisiana."

Around 4 p.m. last Saturday, Sepulvado bagged a buck, but because others were also hunting in the area that day, he was waiting until "quiet time" to leave his stand to fetch the deer. His son Austin and grandson Shane, along with Shane's wife Katie, were with him.

"At 4:45, those five bears came out and they came out right close to my stand, maybe 20 yards away. I took photos on my iPhone. They were eating some of my corn and bran, and then they walked down the lane toward where I shot my deer," he said. "I didn't know what to do, didn't want to shoot at them, so I waited to see. After a few minutes, they went into the woods on the same side my deer had run off on."

Randy Zellers, assistant chief of communications for the Arkansas Game and Fish Commission, said hunters in south Arkansas should get used to seeing black bears, which are the only bear species native to Arkansas.

"Arkansas was once unofficially known as the 'Bear State.' Back in the days of European settlement, bears, black bears ... were so abundant in Arkansas that we had hunters and trappers come from across the ocean. A lot of the French and Canadian trappers came to Arkansas to pursue bears and trap and hunt them," he said.

Back in those days, bear hunters were primarily interested in "bear oil," made from rendering a bear's fat and used in preserving food.

"Refrigeration wasn't a thing and preserving your food was difficult," Zellers said. "Bear oil was one of the most stable oils in that time."

Arkansas was such a hub for bear hunters that by the 1920s, through habitat destruction caused by European settlement and market hunting, the bear population had dropped to about 50.

"We had a few that were barely hanging on in the White River area in south Arkansas," Zellers said.

The AGFC was formed in 1915, and one of its first acts was the prohibition of bear hunting.

"When you're talking about a large predator, a large carnivore, it's very difficult because they have a very slow reproductive rate -- they're not like rabbits or quail," Zellers said. "A bear will typically have one litter of cubs, which is usually one or two, or if you're really lucky, three total, and it will be one or two years before that female bear is ready to reproduce again."

To further boost the bear population in the state, the AGFC relocated more than 250 bears from Minnesota and Manitoba, Canada to Arkansas in 1959. The bears were placed in the Ozark and Ouachita mountains, Zellers said.

And because of those efforts, the black bear population in Arkansas has rebounded significantly. Zellers said current estimates place the state's bear population at 5,000 to 6,000.

"Arkansas' bear restoration is actually considered the most successful reintroduction of a large carnivore in the world," he said.

Talking to Sepulvado, he doesn't sound like he was too fazed by the bears last weekend, though he said when he ran into a couple bears the day after he shot his deer, he watched them leave the area and then left in the opposite direction.

"I see a lot of people that say they'd be scared. You never know what you'll see out hunting," he said.

Last Saturday, once night started to fall, Sepulvado and his son were finally able to leave their stand and start searching for his deer. For a while, they couldn't find any traces of blood, but eventually he found some of the deer's hair.

"I saw some white hair on the ground -- I thought, 'surely I didn't shoot the deer low,' because that's where the white hair would have come off --, and finally I saw my deer about five yards up from where I saw the hair," he said. "I had found (the deer) probably within 15 to 30 minutes after they got it. I was lucky enough not to stumble upon them. I didn't hear anything when I was looking in the thicket. The deer's head was pointed toward me, its legs were stretched like something had been pulling it."

Zellers said bears like an easy meal. That's why they frequent places like hunting clubs, where deer feeders -- or, more accurately, he said, "wildlife feeders" -- are well-stocked this time of year.

"Those bears have discovered, 'hey, this is a free food area.' If you're not wanting to have those bears come around near hunting season, stop putting out food," he advised. "Bird feeders, open trash cans, dog food that's easy to get to, dump sites with carcasses of animals, cleaning sites -- those are going to attract bears. They're going to go for the easy meal. The best thing a hunter can do is stop putting food in that feeder. The bear will move on and try to find food somewhere else."

But black bears, generally, are not aggressive, Zellers said. They can be frightened off relatively easily, by yelling, banging pots and pans together, or even throwing a stick.

"Now, I wouldn't get between a mama and her cubs; that's an old adage, and I think it's true, and I don't think it's only true of bears," he said. "The best thing you can do, from the get-go, is make sure the bear understands it's not wanted... They're not aggressive; they're pretty timid unless they're habituated (to areas people inhabit). If you show them this isn't the place to be, they don't want to be there. And they won't associate you with throwing a stick, they just know a stick hurts and they'll go (away)."

Sometimes, a bear will find its way to a neighborhood. Local residents may be excited to see the bear and decide to feed it, Zellers said, but that's about the worst thing one can do when a bear comes knocking. The bear will learn that it can get food at a place, but it won't understand that it's a person feeding it; instead, the person will just look like competition for the meal.

"This happens a lot in semi-rural areas, suburban areas. A bear shows up, it's neat and exciting... They want to encourage it to hang around, but then they get tired of it, but this is where it gets its food now, and you're competition, and that's where we get an issue," Zellers said. "If you want to run bears off -- and this isn't very popular with people -- the best method is to stop feeding."

Sepulvado said the bears that grabbed his deer managed to get a few bites out of it before he came along. But the venison was still good, and the experience hasn't scared him out of the woods.

For the first time this year, south Arkansans will have a bear hunting season. Zellers said bear hunting was opened in northwest Arkansas -- near the Ozark Mountains -- in 1980, but it's taken four decades more to bring the bear population in south Arkansas to a high enough level to allow it here.

"The reason we hunt them (in northwest Arkansas) -- there's a threshold called 'sociological carrying capacity,' (which is the level) where bears and people can co-exist without too many nuisances, damage from wildlife becoming too big of a problem. The bear population can thrive but it doesn't become a nuisance to human populations," he said. "We keep the harvest pretty low just to maintain that sociological carrying capacity."

Hunters in northwest Arkansas have been at it since September, but with a smaller population in south Arkansas, the first bear hunting season will be very conservative, Zellers said.

"It's incredibly conservative," he said. "We don't want to over-hunt those female bears, because with an animal with such a slow reproductive cycle, you'd be setting yourself back decades. So we're monitoring that very closely and we open the season in the southern part of the state well into December, so the chances are that if someone sees a bear out in December, it's most likely going to be a male bear."

Zellers said bears don't really hibernate in Arkansas, but female bears will overwinter in dens with their cubs. The AGFC uses that denning period to check on the state's female bears and her cubs. The agency has put radio collars on some bears in the state, which allows them to be periodically tracked, and starting this year in south Arkansas, some bears have also been outfitted with satellite collars that allow real-time tracking, which the AGFC plans to use to estimate the bear population in the area.

"The satellite collars give daily info -- feedback of where the bear is going to, how big their home range is, how it's affected when people go to hunt," Zellers said. "It gives us a great opportunity to see how this population that has not been hunted before, how they respond to the increased human activity, hunting activity, to see where they go."

Bear hunting season in Zone 4, where Union County sits, will open on Dec. 10 and continue through Dec. 16. A quota of 25 bears is in place in the zone -- which encompasses 18 counties --, and once it's reached, bear season will close, earlier than Dec. 16 if the quota is hit before then. Only modern guns are permitted in the Zone 4 bear hunting season.

"We do want people who want to pursue a bear -- some have already become a nuisance at deer clubs with tearing down feeders, et cetera -- so this gives those hunters the opportunity to enjoy a bear hunt and take care of the nuisance issue," he said. "So it's a conservative season, but the idea is, we want to continue to have a stable, sustainable population of bears in the southern part of the state."

For Sepulvado, deer season has already been a success, but he'll continue hunting through the rest of fall and winter, he said.

"We've been bow hunting since bow season opened. We hunt a lot. Between us all (Sepulvado, Austin, Shane and Katie), I think we've killed 11 deer so far. That's a lot of hours in the woods, not just luck; it's work," he said. "We're looking forward to bear season."

For more information about bear hunting season and regulations, visit agfc.com, click the Hunting tab and select Bears under Big Game in the drop-down menu. 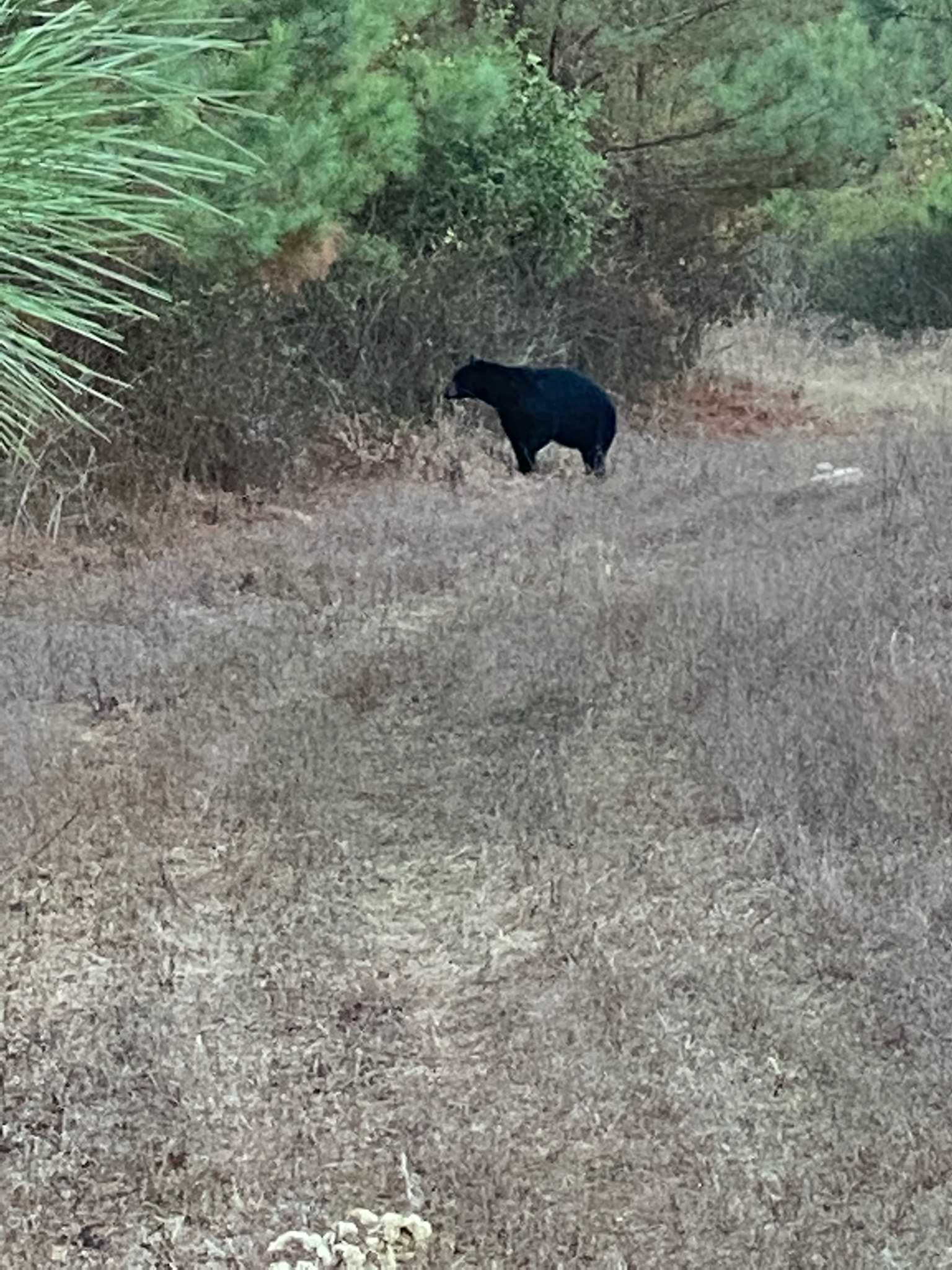 A lone bear is seen at the LaPere hunting club in Union County on Friday, Nov. 18. (Courtesy of Jerry Sepulvado/Special to the News-Times)