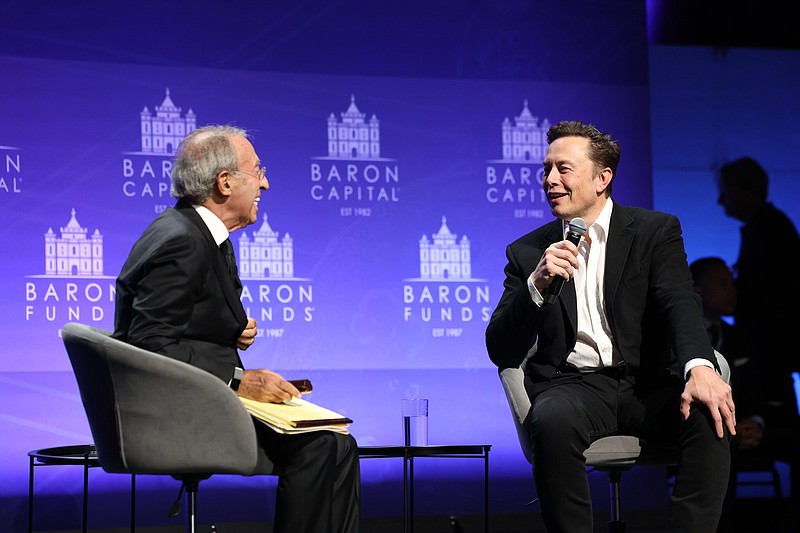 By BARBARA ORTUTAY and MATT O'BRIEN

The speed and size of the cuts also opened Musk and Twitter to lawsuits. At least one was filed Thursday in San Francisco alleging that Twitter intends to lay off more workers and has violated federal law by not providing the required notice.

Musk didn't confirm or correct investor Ron Baron at a conference in New York on Friday when he asked the billionaire Tesla CEO how much money he would save after he "fired half of Twitter."

Musk responded by talking about Twitter's cost and revenue challenges and blamed activists who urged big companies to halt advertising on the platform. Musk hasn't commented on the layoffs themselves.

"The activist groups have been successful in causing a massive drop in Twitter advertising revenue, and we've done our absolute best to appease them and nothing is working," he said.

Some employees of the San Francisco-based company tweeted earlier that they had already lost access to their work accounts. They and others tweeted messages of support using the hashtag #OneTeam. The email to staff said job reductions were "necessary to ensure the company's success moving forward."

A civic integrity team manager at Twitter who quit in September, Eddie Perez, said he fears the layoffs so close to the midterms could allow disinformation to "spread like wildfire" during the post-election vote-counting period in particular.

"I have a hard time believing that it doesn't have a material impact on their ability to manage the amount of disinformation out there," he said, adding that there simply may not be enough employees to beat it back.

Twitter's employees have been expecting layoffs since Musk took the helm. Already, he has fired top executives, including CEO Parag Agrawal, on his first day as owner.

Musk also had removed the company's board of directors and installed himself as the sole board member. On Thursday night and Friday morning as the notices went out, many Twitter employees took to the platform to express support for each other -- often simply tweeting blue heart emojis to signify its blue bird logo -- and salute emojis in replies to each other.

As of Friday, Musk and Twitter had given no public notice of the coming layoffs, according to a spokesperson for California's Employment Development Department. That's even though the Worker Adjustment and Retraining Notification statute requires employers with at least 100 workers to disclose layoffs involving 500 or more employees, regardless of whether a company is publicly traded or privately held.

The speed of the layoffs could also open Musk and Twitter up to discrimination claims if it turns out, for instance, that they disproportionally affected women, people of color or older workers.

Insider Intelligence analyst Jasmine Enberg said there is "little Musk can say to appease advertisers when he's keeping the company in a constant state of uncertainty and turmoil, and appears indifferent to Twitter employees and the law."

"Musk needs advertisers more than they need him," she said. "Pulling ads from Twitter is a quick and painless decision for most brands."