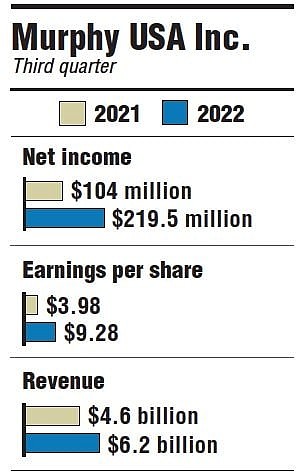 The per-share earnings beat the average estimate of $7.57 forecast by six analysts surveyed by Thomson Reuters.

"Murphy USA continues to provide value to our customers and they are rewarding us with their loyalty, resulting in more frequent trips and larger baskets," Clyde said.

He added that October per-store volumes of fuel sold are running about 10% higher than in October 2021.

The total gallons of fuel sold in the third quarter increased 13.2% to 1.2 billion. In the July-through-September period, gasoline prices ranged between $3.71 and $4.77, according to the U.S. Energy Information Administration.

The company owns about 1,700 stores across 27 states. Most are near a Walmart Inc. Supercenter.

Company executives discussed the quarter's results in a conference call last Thursday. The webcast and a transcript are available for replay.