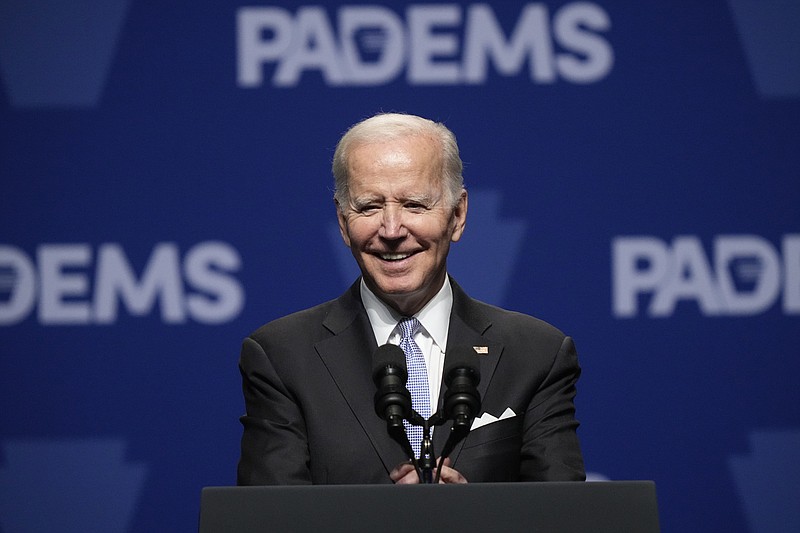 WASHINGTON (AP) -- President Joe Biden on Monday will raise the possibility of imposing a 'windfall tax' on energy companies if they don't boost domestic production, as his administration aims to combat high gas prices just days before the midterm elections.

The White House said Biden will deliver remarks to respond "to reports over recent days of major oil companies making record-setting profits even as they refuse to help lower prices at the pump for the American people." A person familiar with the matter said Biden will float imposing a tax on the profits of energy companies, as he seeks to pressure them to lower prices for consumers. The person spoke on the condition of anonymity to preview Biden's remarks.

"The president will again call on oil and gas companies to invest their record profits in lowering costs for American families and increasing production," a White House official said Monday on the condition of anonymity to discuss Biden's speech. "And if they don't, he will call on Congress to consider requiring oil companies to pay tax penalties and face other restrictions."

"Oil companies made billions in profits this quarter," Biden tweeted on Saturday. "They're using these record profits to pay out their wealthy shareholders instead of investing in production and lowering costs for Americans. It's unacceptable. It's time for these companies to bring down prices at the pump."

High prices at the pump have exacerbated inflation and have taken a toll on Biden and Democrats' standing among voters.

Congress would have to approve any additional taxes on the energy producers -- which would be a tall order in the current Congress where Democrats have narrow control of the House and Senate, and even less likely should Republicans retake one or both chambers on Nov. 8.

Last week Exxon Mobil broke records with its profits in the third quarter, raking in $19.66 billion in net income, and Chevron had $11.23 billion in profits, almost reaching the record profits it attained in the prior quarter.

Americans have struggled with painfully high gasoline prices in recent months, paying more than $4.80 on average for a gallon of regular at the beginning of July, according to AAA. They've since fallen to $3.76 on average nationally, but the White House says they should be lower, given declines in global oil prices over the same period.

"Can't believe I have to say this but giving profits to shareholders is not the same as bringing prices down for American families," Biden tweeted on Friday.

Last week, California Gov. Gavin Newsom called on Congress to tax the profits of oil companies. "Crude oil prices are down but oil and gas companies have jacked up prices at the pump in California. This doesn't add up," Newsom said on Friday. "We're not going to stand by while greedy oil companies fleece Californians. Instead, I'm calling for a windfall tax to ensure excess oil profits go back to help millions of Californians who are getting ripped off."

The Democratic-controlled House passed a bill in May authorizing the Federal Trade Commission to punish companies that engage in price gouging and adding a new unit at the FTC to monitor fuel markets. The bill has stalled in the Senate. A related measure by Senate Commerce Committee Chair Maria Cantwell, D-Wash., has not come to the Senate floor for a vote.

"This is exactly the type of leadership we've been waiting for from President Biden," said Jamie Henn, spokesperson for the group 'Stop the Oil Profiteering.' "Big Oil has made nearly $300 billion in excess profits this year by gouging us at the pump. A windfall profits tax can provide immediate relief by redirecting that money into the pockets of hardworking Americans."