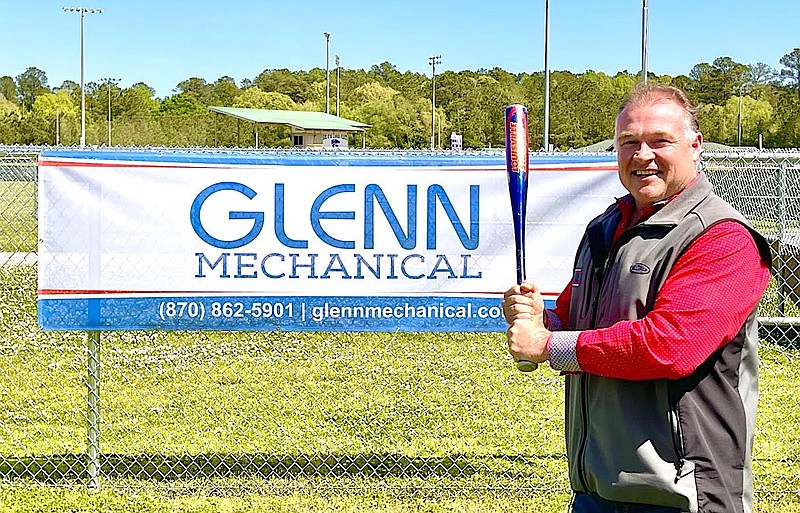 Brent McDiarmid, of Glenn Mechanical, fires up a swing in front a banner at the El Dorado-Union County Recreation Complex. Glenn Mechanical is a grand slam sponsor of six banners that are posted on outfield fences. The complex commission is working with the Diamond Agency to secure at least 20 such sponsorships this year. Glenn Mechanical is one of 14 sponsors to sign up or renew so far. Others include FACT, Inc., Physical Therapy Center of South Arkansas and Rep. Matthew Shepherd. (Contributed)

A decades-old drainage problem may soon be repaired at the El Dorado-Union County Recreation Complex -- which is welcome news for users and visitors to the north side of the facility.

For nearly 40 years, visitors have had to slosh through or navigate their way around standing water that pools around the entrance that leads to baseball/softball fields 1 - 4 on the north side of the complex.

"It's been an ongoing issue for quite a while," Greg Harrison, chairman of the complex commission, said during a regular commission meeting May 6.

Referring to heavy rains that had fallen in the area over the past two weeks, Commissioner Keith Smith, who regularly hosts softball tournaments at the complex, agreed.

"It's really been an issue over the past days," Smith said.

Commissioner Stacy Scroggins pointed to the renovation and expansion plan that is underway at the complex.

New turf, lighting and fencing were also installed on the four older fields on the north end of the facility.

Two kiosks, which were donated by Murphy USA, have been installed and are expected to open soon to serve as concession stands and additional restrooms for the south fields.

The kiosks are used at many MUSA gas stations and convenience stores across the country.

An existing concession stand is available for visitors on the north side of the complex.

The remaining component of phase one calls for additional restrooms to serve the south fields.

City officials have discussed expanding an existing restroom facility that is adjacent to the Dumas Pavilion and has four stalls each in separate men and women's units.

"That's got to be fixed," Scroggins said, referring to the irrigation problem at the north entrance.

"We're spending millions of dollars out there and people can't get through the fence without getting their feet wet," he continued. "We need to look into feasibility and the most economical way to do it."

Harrison said the El Dorado Department of Public Works had considered installing French drains and following the meeting, Harrison said he learned that the project has been added to the DPW schedule.

Plans include one or two French drains that will ferry the water from the north entrance to ditch behind field 1, Harrison said.

Other projects and maintenance issues

Commissioners heard updates on other projects and maintenance issues at the complex.

The city has erected wayfinding signs to direct visitors to the north and south fields, including the new soccer fields, and a no parking sign to prohibit visitors from parking on the Clean Harbors Playground near the Dumas Pavilion.

The group also revisited an issue they discussed last month.

Harrison said litter is one of the top complaints that he hears about the complex.

In April, the group heard from Perry Pope, owner of Flower Pot Lawn Care and Landscaping, who contracts with the city to mow and landscape the complex.

Litter was one of the concerns Pope raised with the commission, saying that he and his crew have had to spend time clearing litter from the complex grounds before they can begin mowing.

In one recent instance, he said, the litter was excessive and Flowerpot crews spent three hours removing it before they could mow.

After a lengthy discussion, commissioners advised Pope and Anthony Farris King -- athletic director of the Boys and Girls Club of El Dorado, who manages the complex, per a contract with the city -- to coordinate their schedules so that the grounds are free of litter before Flower Pot crews arrive to mow.

To help out with the situation, the Union County Quorum Court also agreed last month to boost garbage pickups at the complex from once a month to twice per week on Monday and Friday, said Harrison, who also serves on the quorum court.

Commissioners had said that the problem was due, in part, to overflowing garbage bins, with litter being strewn by wind and animals.

On May 6, they also discussed encouraging coaches to speak with their teams about littering and "leaving the dugouts the way they found them" at the complex.

Another option is engaging parents to help ensure that the complex and other public fields around the county remain clean, Harrison said.

The complex commission is working with The Diamond Agency on a campaign to renew and boost sponsorships for signs/banners to hang on outfield fences at the complex.

Don Hale, president and owner of the Diamond Agency, previously told commissioners that the goal is to contract with at least 20 sponsors this year.

Last week, the agency reported that it is six sponsorships shy of the goal.

The complex commission is exploring grant opportunities to help develop the second phase of the master plan to renovate and expand the complex.

Phase one is being covered by nearly $2.7 million from the El Dorado Works tax, a one-cent city sales tax initiative to fund economic development, municipal infrastructure and quality-of-life projects for the community.

The El Dorado Advertising and Promotion Commission kicked in $271,800 to help complete the soccer fields after learning that phase one was facing a budget shortfall due to unanticipated engineering costs.

The A&P commission directed the remaining $57,084 balance from the soccer field project and applied it to the installation of the kiosks.

Union County covered the $33,214 cost to ship the kiosks from Atlanta, Georgia, to El Dorado.

The second leg of the master plan proposes a new baseball field for older teens and adults.

The field could be built on more than eight acres of land that has been donated to the complex by PotlatchDeltic, complex commissioners have said.

The property is adjacent to the south fields.

Parking lot improvements and a recreational trail are also planned for phase 2.

On May 6, Harrison presented commissioners with grant options that are offered by the Arkansas Department of Parks, Heritage and Tourism's Outdoor Recreation Grants Program.

Harrison said a survey of the land donated by Potlatch is expected to be cleared up this week.

Commissioner and El Dorado City Council Member Avo Vartenian made a motion for the group to proceed with pursuing any applicable grants, with a caveat.

"I make that motion pending the results of the survey ... so that we can see exactly where the walking trail is going to land," Vartenian said.

The group is also working to begin a feasibility study for phase two of the master plan -- a process that will consider other potential funding sources.