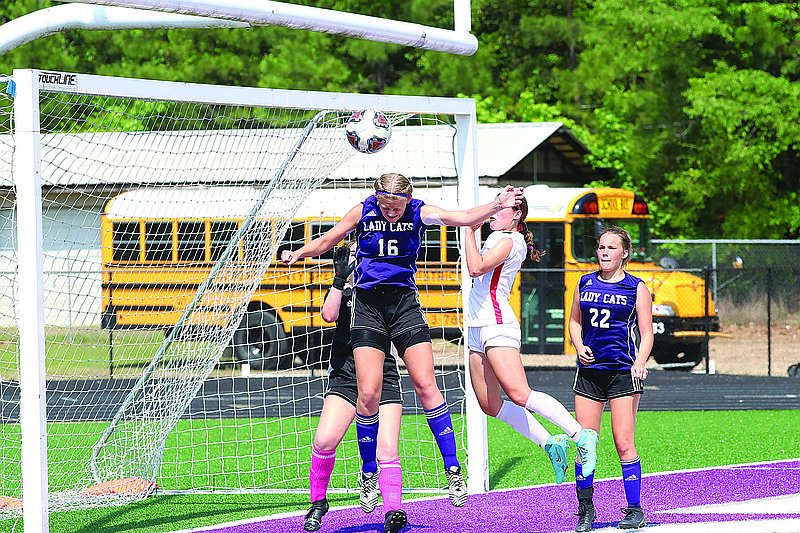 El Dorado's Layla Lee heads the ball away from the goal in front of goalkeeper Catelyn Connor and (22) Brintley Parker and Searcy's Gabie Eddins in the second half. The Lady Wildcats fell to the Lady Lions 6-0 in the semifinals of the 5A State Tournament Saturday at Memorial Stadium.

Searcy girls' soccer showed it was at a different level than El Dorado on Saturday. The defending champion Lady Lions dominated the Lady Wildcats 6-0 in the semifinals of the 5A State Tournament at Memorial Stadium.

The Lady Lions scored five goals in the first half, using superior speed on the flanks. Searcy peppered El Dorado's goal and only an outstanding effort by goalkeeper Catelyn Connor kept the score reasonably respectable.

"We wanted to score early and we got that opportunity," said Searcy coach Larry Stamps. "We've got some speed up top and it's hard to handle that. I always tell them, speed kills. And boy, it did today."

Gabie Eddins scored three goals, including the first on a breakaway on the left side with 33:22 left in the first half.

The Lady Wildcats answered with a long ball over the top to sophomore London Ingram. Ingram, who helped El Dorado with the 5A State Track & Field title last week, outran the defenders but pushed her shot left of the goal.

The Lady Lions went up 2-0 after an own goal by the Lady Wildcats at the 22:24 mark while trying to clear the ball out of their zone.

"I feel like it knocked the wind out of their sails a little bit," he said. "They tried to regroup but they just couldn't get going. We couldn't get our chemistry going at all. I think if we'd played a little up to our potential, it would've been more competitive. I think they were a little shellshocked, knowing they were playing a team of that caliber."

Connor made a point blank save in front of the net less than a minute later. The Lady Wildcats went over the top again to Ingram, who outran a pair of defenders but her shot, under pressure, just missed to the right of the goal.

"Oh gosh, they go over the top with her so we had to get a little depth back so we could run some of those down," Stamps said of Ingram. "She's so physical and I'll bet she runs a 4.3 in the 40. I mean, she's an animal. That's a compliment. I told her after the game, if you keep working, you're playing Division I somewhere. She's that good. I didn't know they had that kind of speed but boy, she shocked us. So, we had to make an adjustment during that first water break. Then we got it going."

At the 18:10 mark, Eddins scored from 15 yards out with her left foot. Chandler Meadows found the net on a corner kick at the 13:51 mark before Alyssa Day's goal with 8:17 left in the half staked Searcy to a 5-0 lead.

Connor added two more saves, including another from point blank range in the half. She added four more saves in the second half.

"She did well. I didn't know if we were going to get it past her," Stamps said. "We just had some one-on-ones and you can't defend that. She stopped a couple of 'em, though, didn't she - a couple point blanks?"

Eddins accounted for the final goal with 27:35 left in the second half.

"This team, I knew as freshmen they were pretty good. They're just getting better every year," said Stamps. "They know what to do. You don't have to tell them very much. And, they're hard workers. They deserve what they get."

The Lady Wildcats finished their season with a 5A South title and a 15-2 record.

"I'm still proud of the season. They won the conference. We played some good teams to make it as far as we did," said Matthews. "But to me personally, I felt like the best team won today. I wish we had won but I'm not going to sit here and say my team was better and this and that. I feel like they had more talent than we do at every position. And, they had subs at every position.

"I think we had a great season. We met one of our goals. We just have to sit back and go back to the drawing board for next year."