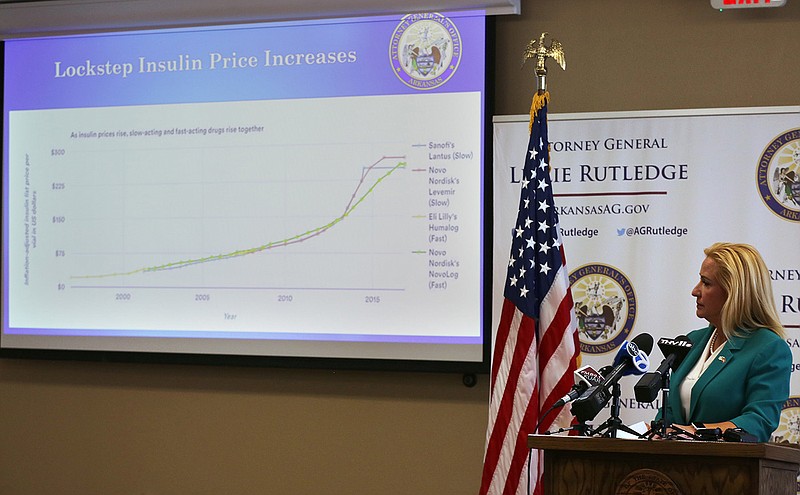 The state's attorney general has filed a lawsuit against several drug and pharmacy companies for deceptively driving up the cost of insulin in Arkansas.

The lawsuit accuses drug manufacturers and pharmacy benefit managers of manipulating and inflating insulin and drug prices in Arkansas. It alleges Nova Nordisk, Sanofi and Eli Lilly conspired with Express Scripts, Care-mark and Optum to significantly increase their revenues by unfairly making insulin and other diabetic treatments unaffordable for many diabetics in Arkansas and creating a financial burden for consumers.

Rutledge said the intent of the lawsuit is "to hold these manufacturers and these PBMs accountable for their unfair and deceptive schemes of artificially inflating the cost of insulin and prescription drugs." \

The lawsuit details an alleged scheme between drug manufacturers and pharmacy benefit managers to inflate the cost of insulin using an approved drug list for insurers. It seeks $10,000 per violation of the Arkansas Deceptive Trade Practices Act.

"Because the three PBM defendants control 80% of the pharmacy benefit market, unless they include a drug on one of their standard formulary offerings, it is not available to 80% of Arkansas citizens," the lawsuit states. "The manufacturers likewise understand that PBM's standard formularies drive drug utilization -- if manufacturers want their drugs to be prescribed and paid for, they must obtain preferable formulary position on the PBM defendant's formularies."

"Over the course of the last 15 years and pursuant to the Insulin Pricing Scheme, manufacturer defendants have in lockstep raised the prices of their respective diabetes drugs in an astounding manner, even though the cost to produce these drugs has decreased during that same time period," the lawsuit states. "Insulins, which today cost manufacturer defendants less than $2 per drug to produce, and which were originally released at a list price of $20 per drug in the late 1990s, now carry list prices that range between $300 to $700 per drug."

Rutledge said she would prefer to see prices go down closer to the $20 range.

"This medication is really the difference between whether or not they can live comfortably and be able to go to work and see their children and not worry on a day to day basis," Rutledge said.

Rutledge used graphs to illustrate the rise of insulin prices compared to the price of consumer goods over the past couple of decades.

"These drug manufacturers and PBMs have inflated the price of insulin and other diabetes-related medication to line their own pockets," Rutledge said in a news release. "They have endangered the lives of thousands of Arkansans and Americans who simply cannot afford to buy this life-saving medicine."

Rutledge said more than 400,000 Arkansans have been diagnosed with diabetes and more than 800,000 are pre-diabetic, and noted that diabetes is the seventh-leading cause of death in the state despite the availability of treatment. The lawsuit estimates the economic impact of diabetes in Arkansas at $3.1 billion per year.

"The inflated costs have made it more difficult for Arkansas diabetic patients to buy their medications, leading to avoidable complications and higher overall healthcare costs," she said.

Kym Armstrong, a senior investigator for the attorney general's office, said she is one of many Arkansans who suffer from diabetes and understands firsthand the problems associated with insulin prices.

"This is an unfortunate reality for diabetics that it's necessary for us to have this medicine," Armstrong said. "Many patients, especially seniors and the uninsured, find themselves rationing their medicine because the cost versus the light bill, versus your rent. You have to make a choice, and a lot of times we have to make that choice not to get our medicines or to take less of our medicine so we can afford lights and food.