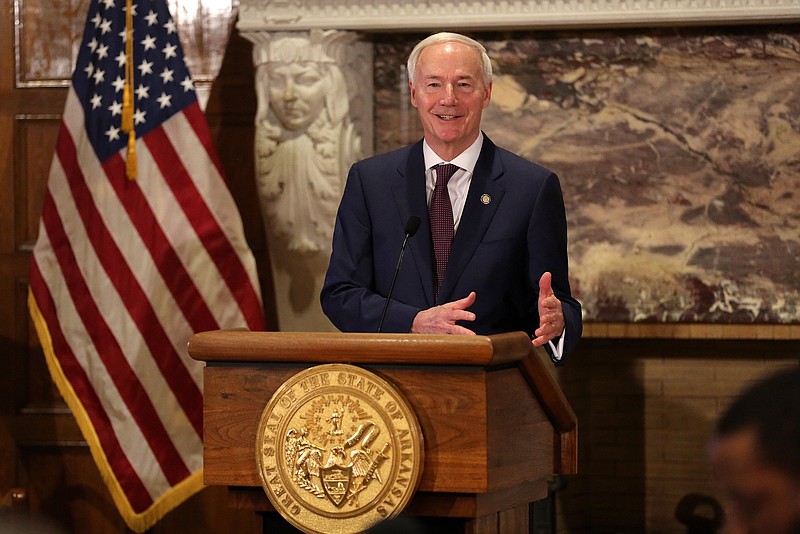 The "10 Minutes Matter" campaign is meant to emphasize the importance of reading to young children, Hutchinson said, by urging parents to spend 10 minutes each day reading to their child.

"The action that we're asking parents to take is to simply spend 10 minutes that matter with their child in reading, before school, at that tender young age, to increase their brain development, to increase their vocabulary and their preparation for school," Hutchinson said.

A partnership between the Arkansas Departments of Human Services (DHS) and Education (ADE), a toolkit with resources to implement the daily "10 minutes" is available online for parents, child care providers and "anyone willing to promote reading to that particular young age group," Hutchinson said.

The toolkit includes resources on finding free or low-cost books and local libraries, as well as information about age-appropriate reading materials for young children and signing up for the Dolly Parton Imagination Library, which provides a free book each month to children up to five years of age.

Hutchinson said that 90% of a child's brain develops between their birth and reaching 5 years of age. By reading to a child each day, he said, a parent can help increase their child's vocabulary to between 300,000 and 1.3 million words by the time they start school.

But the benefit isn't limited to a child's academic performance, said Tonya Williams, director of the state DHS's Division of Child Care and Early Childhood Development.

"It's not just about the cognitive development, the vocabulary; but it promotes listening skills, it equally promotes good social-emotions development and a great bonding time for parents and children," she said.

Hutchinson also noted that when he was a father to young children, the time spent reading with them was valuable for their family.

"I think it helped them and it was a time of bonding between a parent and child," he said.

ADE Secretary Johnny Key said studies have shown that many children in Arkansas enter school "with certain deficits," and the "10 minutes" campaign aims to close those achievement gaps early.

"This '10 minutes' initiative can help close that gap so we see better prepared children," he said. "We're very excited to spread the word about this to develop a strong culture of reading throughout the state of Arkansas."

For more information about the "10 Minutes Matter" campaign, or to access the state's reading toolkit, visit humanservices.arkansas.gov/divisions-shared-services/child-care-early-childhood-education/10-minutes-matter.

Hutchinson also highlighted the ongoing invasion of Ukraine on Tuesday, pointing to steps he's taken to ensure the state is "doing what we can to honor the sanctions imposed by the international community against Russia."

Russian forces began invading Ukrainian cities last Thursday, and fighting has continued since. The United States and other countries around the world have imposed economic sanctions on Russia in the days since the invasion began.

On Monday, Hutchinson issued a statement condemning the invasion and calling for three days of prayer for Ukrainians and a review of the state's business ties with Russia.

He said Tuesday that he'd worked with the Alcoholic Beverage Control Board to make sure alcohol distributors in Arkansas were not acquiring alcohol from Russia. Additionally, he asked the agencies that invest state retirement funds to check for direct investments in Russian assets and learned that there weren't any, he said.

Also, Hutchinson said the state's Department of Information Services will be sending out guidance to state and local governments about avoiding possible cyberattacks from Russia.

He urged Arkansans to pray for the Ukrainian people.

"There's probably not a more important moment than now and tomorrow to continue in prayer for them, their safety and protection and that they will have an increased support from our allies," he said.

Hutchinson recognized two public workers who were killed in the closing days of February, as well on Tuesday.

Sgt. Joshua Caudell of the Department of Corrections, he said, was shot in the line of duty on Feb. 28, and West Memphis Firefighter Jason Lang was hit by an 18-wheeler while helping at a traffic stop on his way to an EMT training course. A suspect is in custody related to Caudell's killing, the governor said.

"So two individuals serving the state and public safety have died under those circumstances. For that reason, yesterday, I ordered the flags lowered to half-mast across the state in honor of both Sgt. Caudell and Firefighter Lang," Hutchinson said.

The governor's Tuesday update on COVID-19 in the state was brief, as he noted that the Arkansas Department of Health's daily COVID figures for the state and counties had not yet been updated by the time his press conference was held. He said the state's numbers have been on the decline, a good thing.

Hutchinson said he talked with White House officials Tuesday and learned that the state's allocation of a therapeutic drug meant to treat COVID-19 will increase soon.

"So that should be a relief to those who may be infected, that we'll have better therapeutics coming," he said.

Several COVID-19 vaccine clinics for people 5 and older are scheduled in the coming weeks, including today, from 5:30 to 7:30 p.m. at Douglas Chapel Missionary Baptist Church.

Many local pharmacies offer the COVID-19 vaccine and booster shots. Call ahead to set an appointment.

The COVID-19 vaccines are free and one does not need health insurance to get it.

Have a vaccine clinic scheduled in Union County? Let us know by emailing the details to [email protected]