Most land mine use by US military banned, except for Korea 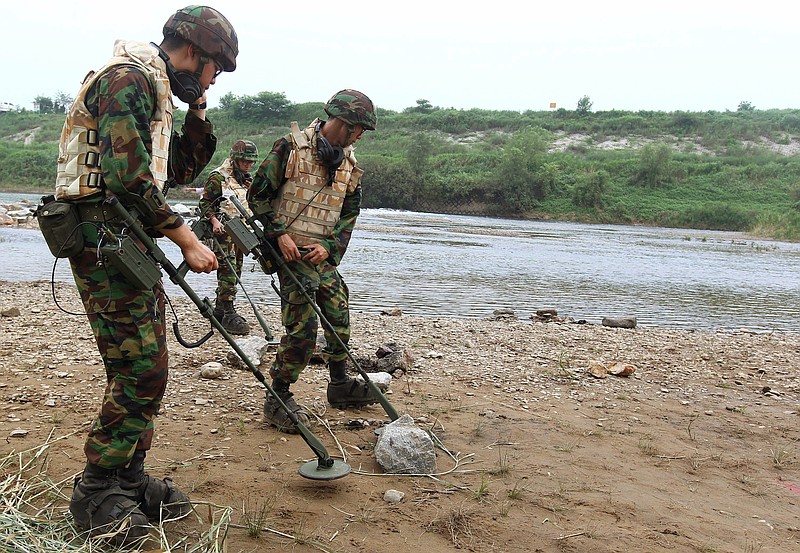 In this Aug. 1, 2010 file photo, South Korean Army soldiers search for landmines near the demilitarized zone that separates the two Koreas in Yeoncheon, north of Seoul, South Korea. The White House announced Tuesday a new policy curtailing the use of anti-personnel land mines by the U.S. military, reversing a more permissive stance that was enacted by former President Donald Trump. Under the policy, such explosives will still be allowed to defend South Korea against a potential attack by North Korea, but otherwise they will be banned. (Lim Byung-shick/Yonhap via AP, File)

WASHINGTON (AP) -- President Joe Biden's administration announced Tuesday that it would restrict the use of anti-personnel land mines by the U.S. military, aligning the country's policy more closely with an international treaty banning the deadly explosives.

"The president believes strongly that we need to curtail their use worldwide," John Kirby, a national security spokesman, said at a White House briefing.

The United States has not extensively deployed the mines since the Gulf War in 1991. But the announcement represents a shift from a more permissive stance under then-President Donald Trump, and it concludes a review that has lasted for more than a year.

Bonnie Jenkins, the State Department's undersecretary for arms control and international security, said the new policy fulfills "a commitment that President Biden made as a candidate," when he described Trump's decision as "reckless."

Anti-personnel land mines are buried underground or scattered on the surface, and they can pose a lethal threat to civilians long after combat has ended. Russia has reportedly used the explosives during its invasion of Ukraine.

"As welcome as this step is, the White House needs to put the U.S. on a definitive path to join the treaties banning anti-personnel mines and cluster munitions," he said in a statement. "Neither of these indiscriminate weapons, the horrific consequences of which we are seeing in Ukraine today, belong in the arsenals of civilized nations."

Under the new policy, the U.S. will restrict the use of these explosives outside of its efforts to help defend South Korea from a potential North Korean invasion. Although the U.S. does not currently have any minefields deployed there, Washington has pledged support for Seoul's defense, which includes anti-personnel mines.

The U.S. has a stockpile of 3 million anti-personnel land mines. Under the new policy, any that aren't needed to protect South Korea will be destroyed. The Pentagon did not immediately respond to a question about whether any will be discarded.

The exception regarding the Korean Peninsula, which was also in place during President Barack Obama's administration, leaves the U.S. short of full compliance with the Ottawa Convention, the 1997 treaty intended to eliminate anti-personnel land mines.

Russia is not a signatory to the treaty either, and Human Rights Watch said it has documented Moscow's use of mines during its invasion of Ukraine.

Print Headline: Most land mine use by US military banned, except for Korea