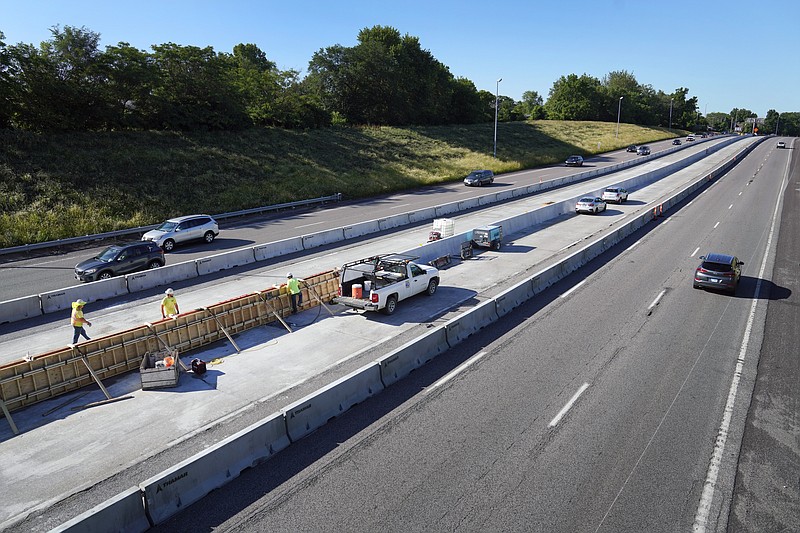 Traffic flows past workers in a construction zone along Interstate 55 Thursday, June 9, 2022, in St. Louis. The Missouri Department of Transportation is doing a series improvement projects along Interstate 55 but inflation has pushed up the cost. (AP Photo/Jeff Roberson)

The price of a foot of water pipe in Tucson, Arizona: up 19 percent. The cost of a ton of asphalt in a small Massachusetts town: up 37 percent. The estimate to build a new airport terminal in Des Moines, Iowa: 69 percent higher, with a several year delay.

Inflation is taking a toll on infrastructure projects across the U.S., driving up costs so much that state and local officials are postponing projects, scaling back others and reprioritizing their needs.

The price hikes already are diminishing the value of a $1 trillion infrastructure plan President Joe Biden signed into law just seven months ago. That law had included, among other things, a roughly 25 percent increase in regular highway program funding for states.

"Those dollars are essentially evaporating," said Jim Tymon, executive director of the American Association of State Highway and Transportation Officials. "The cost of those projects is going up by 20 percent, by 30 percent, and just wiping out that increase from the federal government that they were so excited about earlier in the year."

In Casper, Wyoming, the low bid to rebuild a major intersection and construct a new bridge over the North Platte River came in at $35 million this spring -- 55 percent more than a state engineer's estimate. The bid was rejected and the project delayed as state officials re-evaluate their options.

Gillett had hoped the federal Infrastructure Investment and Jobs Act would finance a boom in highway and bridge construction.

"But it's just not going to go as far as we had hoped," he said.

Inflation has affected the entire U.S. economy, posing one of Biden's biggest challenges during a midterm election year. Fuel, food and housing costs all have shot up. Consumer prices surged 8.6 percent in May over last year, the highest rate since 1981, according to the U.S. Department of Labor.

Prices for some key materials in infrastructure construction have risen even more. Prices paid to U.S. manufacturers of asphalt paving and tar mixtures were up 14 percent in May compared to last year, according to data from the Federal Reserve Bank of St. Louis. Prices for fabricated steel plate, used in bridges, were up 23 percent, and ductile iron pipes and fittings -- used by water systems -- were nearly 25 percent higher.

The hikes are being driven by a variety of factors, including worldwide supply-chain backlogs, strong consumer and business spending in the U.S., Russia's invasion of Ukraine -- and, some argue, federal energy and fiscal policies.

U.S. Rep. Sam Graves, the ranking minority member on the House Transportation and Infrastructure Committee, contends the infrastructure law itself is contributing to inflation by pouring more federal money into an economy already flush with trillions of dollars in federal pandemic aid.

"They are borrowing more money so they can spend more money, (which) is driving inflation, which is cutting down on the projects that they're actually wanting to do," said Graves, a Missouri Republican who voted against the infrastructure bill.

White House senior adviser Mitch Landrieu said the infrastructure law "actually positions us for lowering costs for families in the short- and long-term." He pointed, among other things, to made-in America requirements for steel, iron and other construction materials that could strengthen supply chains and thus lower costs.

Officials at Des Moines International Airport were counting on the federal infrastructure money to replace an aging terminal with a modern structure. Four years ago, a new 14-gate terminal was projected to cost about $434 million and be open by 2026. By this spring, the cost had soared to $733 million.

That's more than the airport can afford, even with the federal aid. So officials are planning to break the project into phases, building just five new gates by 2026 at a cost of $411 million.

"If inflation continues, it may be a decade before the project gets completely done," airport Executive Director Kevin Foley said.

Other projects also have been rocked by inflationary price hikes.

Since voters approved a property tax increase in 2020, the estimated cost of building two light rail lines and a tunnel through Austin, Texas, has gone from $5.8 billion to $10.3 billion. Doubling the tunnel length was a big factor. But inflation and surging real estate prices also fueled the increase, forcing officials to consider cutting costs or lengthening the time frame for completing the project.

"It's been a challenge," said David Couch, chief program officer at the Austin Transit Partnership.

Low bids for a series of bridge repairs along Interstate 55 in St. Louis came in at $63 million this year, 57 percent over the budgeted amount. Overall, Missouri's highway construction costs for the fiscal year ending in June were $139 million over budget -- an 11 percent increase that marked a "pretty significant swing" from several under-budget years, said state Department of Transportation Director Patrick McKenna.

Though Missouri forged ahead with this year's projects, inflation "will take a bite out of the future," McKenna said.

Inflation has carried more immediate consequence in some places.

When bids for a road project in Lansing, Michigan, came in 60 percent above estimates, the city rebid the project and cut its scope in half, said Andrew Kilpatrick, public service director and acting city engineer.

In Huntington, Massachusetts, a 1.5-mile stretch of road won't be finished this year after a 37 percent spike in the price of liquid asphalt increased the cost for paving a mile to about $140,000. The town gets $159,000 annually in state funding for its roads, highway superintendent Charles Dazelle said.

"Right now, one mile of road, that's one year. That is doing nothing else," Dazelle said.

Public water systems across the country also are straining under inflation.

When Tucson, Arizona, launched the first part of a four-phase water main replacement project in September 2020, ductile iron pipe cost $75-a-foot and a gate valve cost $3,000. When it bid the most recent phase this spring, pipe costs had risen to nearly $90-a-foot and gate valves to nearly $4,100. The city is now prioritizing what other projects it can afford, and which ones have to wait.

The city of Tacoma, Washington, also is altering some of its planned water main replacements because of rising costs.

"Some of them are getting delayed, some of them are being reduced in scope, and it's forcing us to re-evaluate some of the budgets that we've set forth," said Ali Polda, principal engineer in the city's water department.

Residents in a neighborhood west of Little Rock, Arkansas, will pay a $146 monthly surcharge to Central Arkansas Water to install new water lines. The charge is 17 percent more than originally planned because of spikes in construction costs.

Other public utilities also will have to choose between scaling back work and passing along costs to customers, said Michael Arceneaux, acting CEO of the Association of Metropolitan Water Agencies.

"In the end, it's going to be the rate payers that suffer," he said, "because the projects have to get done, and funding will have to come from the rate payers." 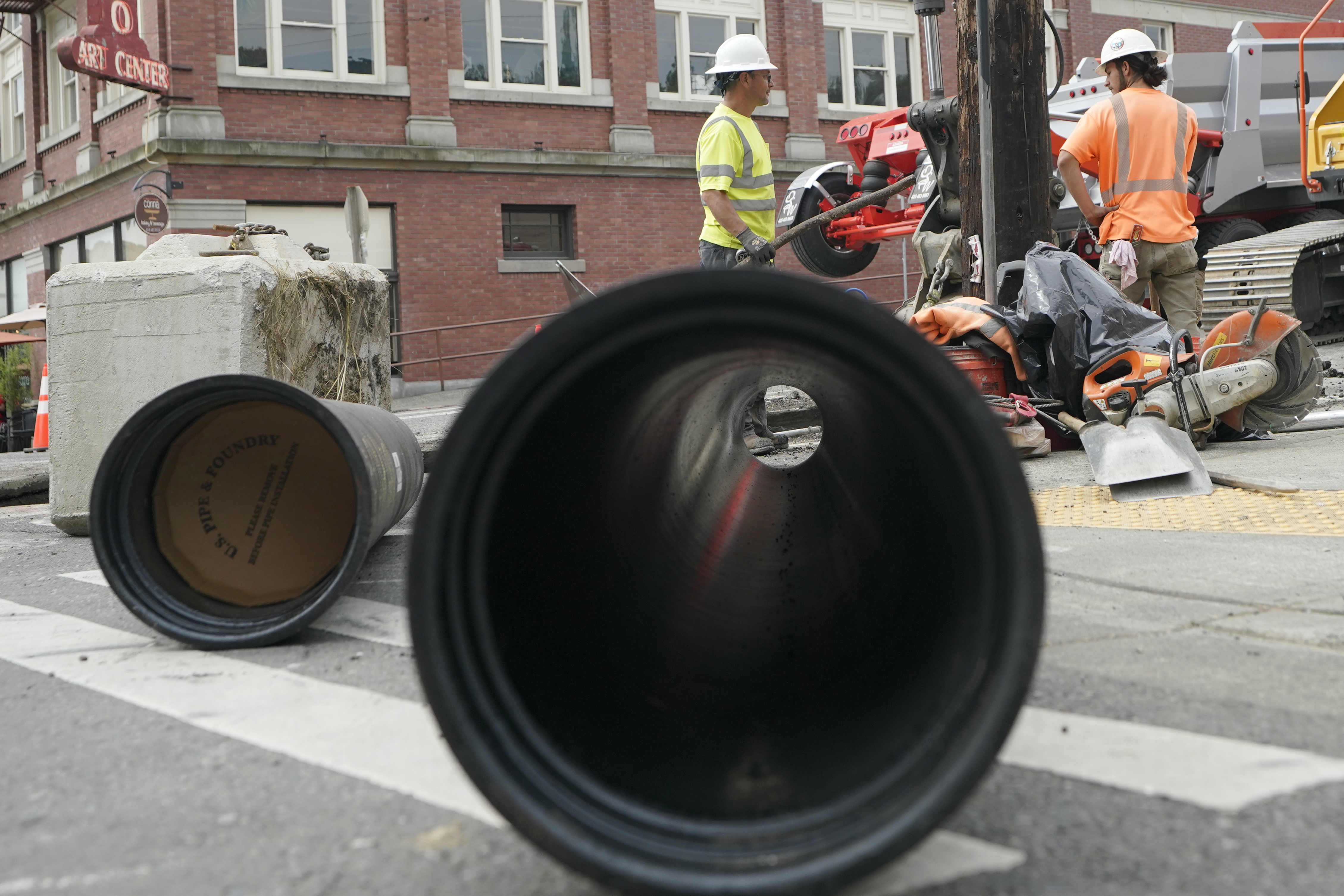 Workers stand next to new water main pipes, Wednesday, June 15, 2022, at the site of a project in downtown Tacoma, Wash. Inflation is taking a toll on infrastructure projects across the U.S., driving up costs so much that state and local officials are postponing projects, scaling back others and reprioritizing their needs. (AP Photo/Ted S. Warren) 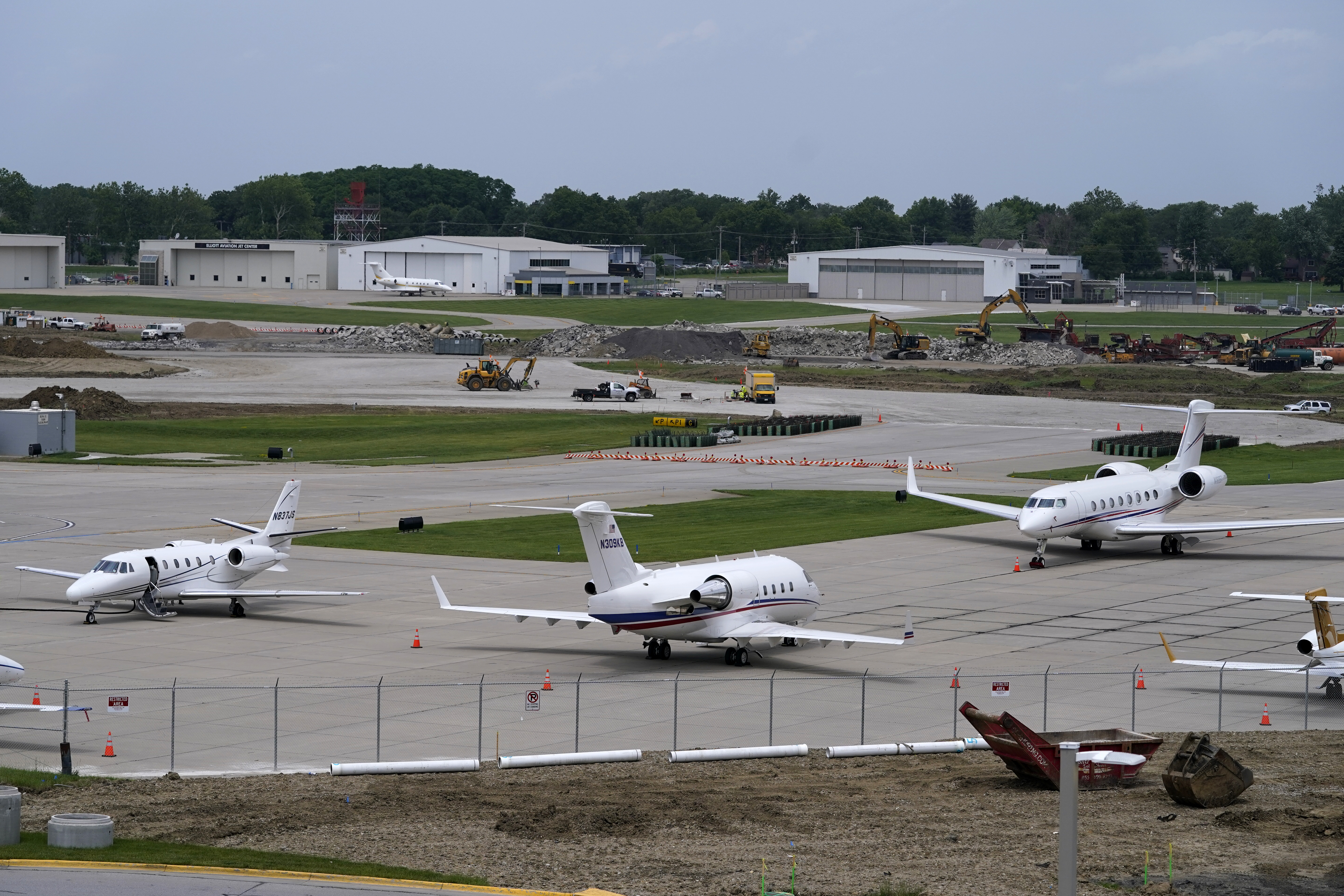 Planes sit on the tarmac at the Des Moines International Airport, Monday, June 13, 2022, in Des Moines, Iowa. Officials at the airport were counting on the federal infrastructure money to replace an aging terminal with a modern structure. Four years ago, a new 14-gate terminal was projected to cost about $434 million and be open by 2026. By this spring, the cost had soared to $733 million. (AP Photo/Charlie Neibergall) 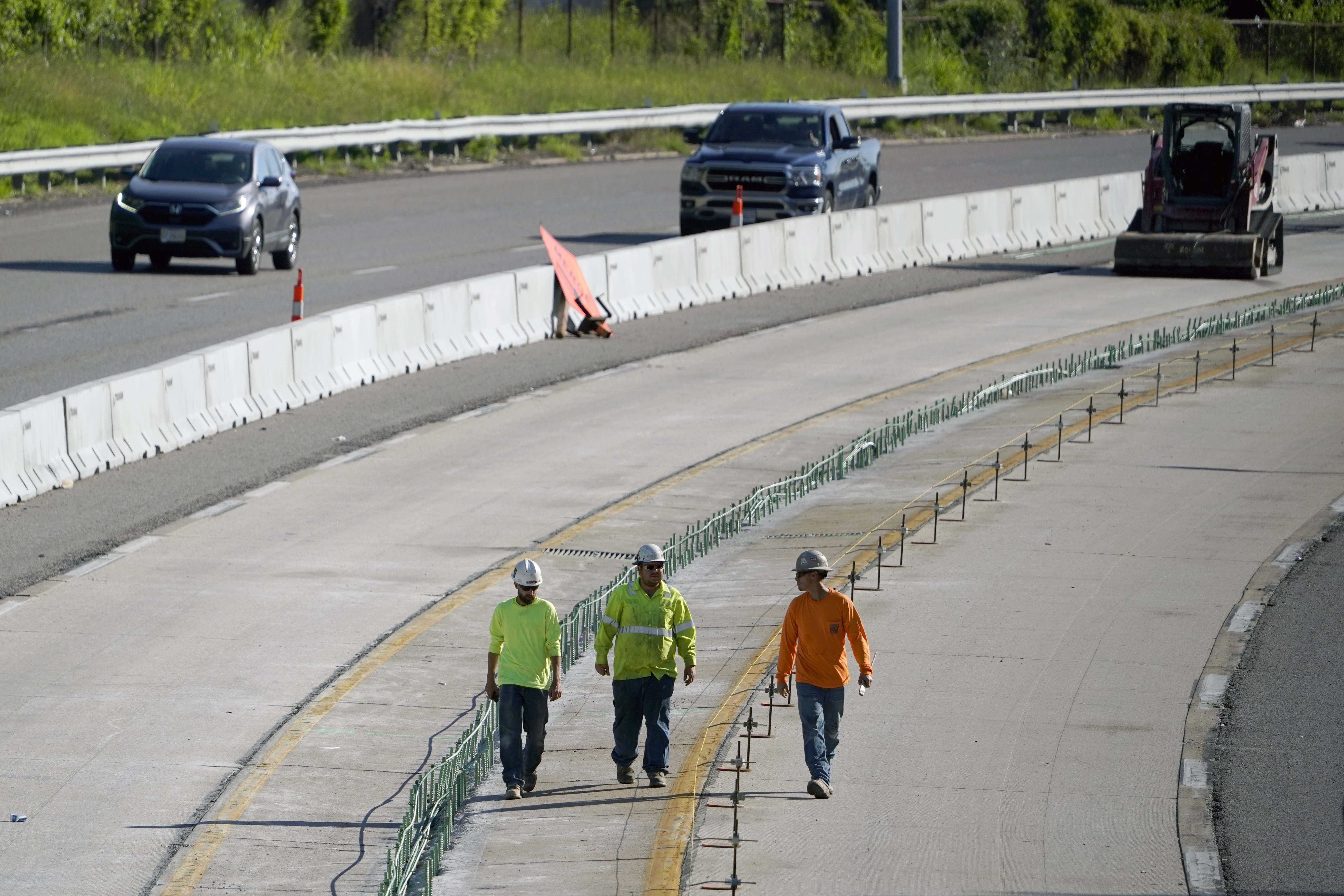 Traffic flows past workers in a construction zone along Interstate 55 Thursday, June 9, 2022, in St. Louis. The Missouri Department of Transportation is doing a series improvement projects along Interstate 55 but inflation has pushed up the cost. (AP Photo/Jeff Roberson) 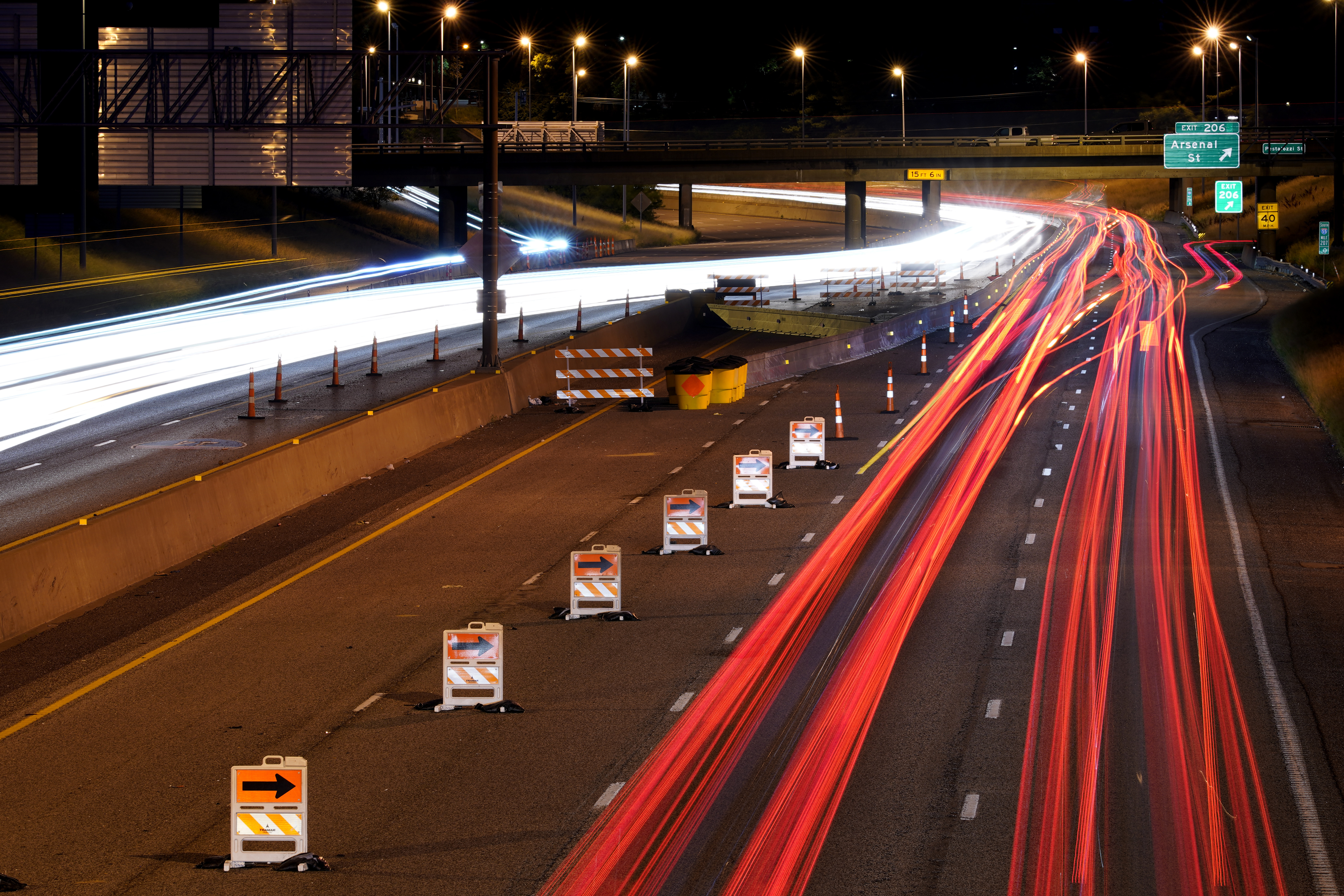 Traffic flows through a construction zone along Interstate 55 Wednesday, June 8, 2022, in St. Louis. The Missouri Department of Transportation is doing a series improvement projects along Interstate 55 but inflation has pushed up the cost. (AP Photo/Jeff Roberson)