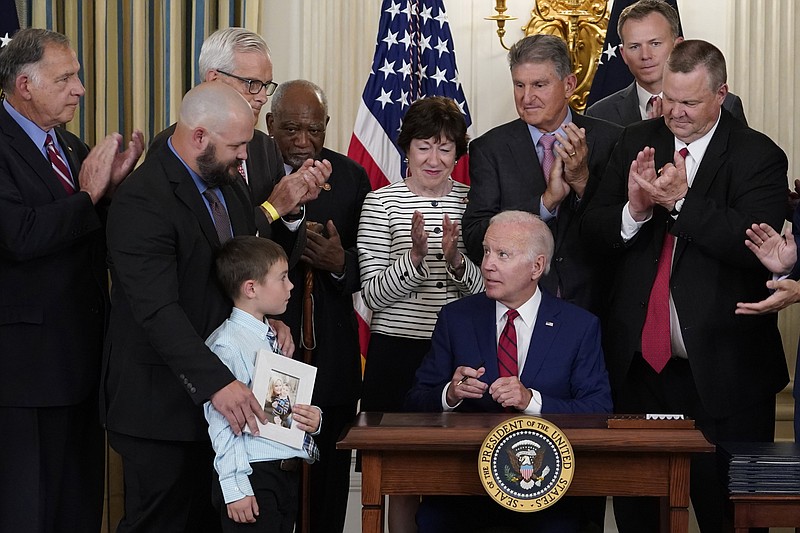 President Joe Biden, seated, looks at Shane Thomas, second from left, husband of the late Marine Corps veteran Kate Hendricks, after signing a bill named after her during an event in the State Dining Room of the White House in Washington, Tuesday, June 7, 2022. Her son Matthew also attends. (AP Photo/Susan Walsh)

Under the measure, veterans who served in locations with burn pits will be cleared for mammograms through health care providers of the U.S. Department of Veterans Affairs, regardless of age or family history.

A separate bill backed by Boozman and approved by Biden on Tuesday will establish a veterans tele-mammography pilot program, along with ordering the department to update in-house breast imaging to three-dimensional breast imaging.

Boozman, a Republican from Rogers, said there are many female veterans from the Gulf wars who are developing breast cancer at an early age.

"These two bills are very important," he said. "They're not solving the problem in Ukraine and things like that, but for the individuals, for those families, this literally is life and death. So making sure that they're diagnosed earlier, that they're treated in the very best way possible."

The senior senator from Arkansas was on hand at the White House on Tuesday as the president signed a slate of veteran-related legislation.

Women veterans have served in Iraq, Afghanistan and other places where there are toxic exposures, she said. The legislation is trying to address veterans of the Gulf wars who develop breast cancer at an earlier age, Ilem said. The Disabled American Veterans is an organization that assists and advocates for service-disabled veterans.

"When there's additional risks, higher risk for people who have served, it's important to be able to get the mammogram early," she said.

Requiring the VA to upgrade to three-dimensional breast imaging is going to have a key impact, she said, adding: "I am very honored that we have Senator Boozman." The bill-signing at the White House marked a rare public appearance between the president and Boozman, who often lambastes the Biden administration on inflation and border security.

Those themes have been on display in recent months as Boozman ran against challengers in this year's Senate Republican primary, which the incumbent won last month.

Boozman continues to be critical of the president, but the senator said Tuesday that veteran issues are neither a Democrat nor Republican topic.

"We hear a lot about all the rancor that goes on here. But many issues like this, particularly veterans, this isn't about Democrats and Republicans. This is not a partisan issue. This is trying to take care of the men and women that served overseas," he said.

Boozman said it was exciting to be a part of the signing ceremony.

"To see Democrats and Republicans coalescing around getting good things done for veterans really is encouraging and it's a great feeling," he said after the bill-signing Tuesday.

Asked how he was able to pass legislation with unanimous support, Boozman said it's about helping members understand a measure's potential impact.

The legislation signed Tuesday instructs the VA secretary to carry out a three-year pilot program to provide tele-screening mammography for veterans who live in states where the VA does not offer breast imaging services at a department facility. The program would also be for veterans who live in places where access to that service at a department facility "is difficult or not feasible."

Another piece of legislation supported by Boozman received Biden's signature on Tuesday.

The bill would give the VA's Office of Inspector General the ability to subpoena various individuals, including certain former department employees.

The legislation will help with accountability by widening the office's ability to conduct more thorough investigations, Boozman has said.