Wimbledon wild-card entry outside top 100 gets Djokovic next 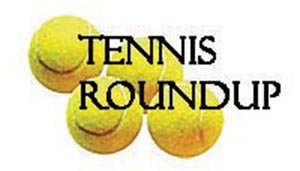 WIMBLEDON, England (AP) — It is, to be sure, the stuff of movies: An oft-injured guy ranked outside the top 100, making his Grand Slam debut thanks to a wild card, knocks out two seeded players on his way to a fourth-round matchup at Wimbledon against none other than No. 1 Novak Djokovic, the three-time defending champion.

We can guess what Hollywood might do with that script. Tim van Rijthoven, a 25-year-old Dutchman, earned the chance to see what will happen in real life across the net from Djokovic after both men won in straight sets Friday at the All England Club.

“Before the tournament started, it was a dream for me to play him, basically. So to be able to have that chance, and to maybe even play on Centre Court or Court 1, is beautiful and magical,” van Rijthoven said after beating No. 22 Nikoloz Basilashvili 6-4, 6-3, 6-4 on Court 12, with its capacity of 1,736, to become the first wild-card entry since 2015 to get to the round of 16 at Wimbledon.

Actually, until June, the backward-ballcap-wearing van Rijthoven never had won a match on the ATP Tour. Since then, he hasn’t lost one, going 8-0, including a victory over current No. 1 Daniil Medvedev to claim the trophy at a grass-court event in the Netherlands.

“It’s been a long one. I’ve had my ups and downs, injuries here and there. Also struggled mentally,” said van Rijthoven, whose health issues included wrist surgery, a procedure on a vein in his right arm because of thrombosis and nine months healing from “golfer’s elbow” that he noted with a smile he incurred from playing tennis.

“I’m just happy to be in the place I am right now,” he said. “I hope to be there for a couple more years — or a lot more years, actually.”

If he’s an unknown to most, he is not to Djokovic, who grabbed the initial seven games and then six of seven in a strong stretch later on, during a 6-0, 6-3, 6-4 victory over No. 22 Miomir Kecmanovic at nearly 15,000-seat Centre Court.

So Djokovic offered a bit of a scouting report.

“His game, from what I’ve seen, is quite suitable to this surface. His big serve, one-handed backhand. Uses the slice well. He’s an all-around player. He can play fast, he can also stay in the rally and come to the net,” said Djokovic, who seemed to enjoy the sunny, breezy conditions in the afternoon, compiling a 36-13 edge in winners against his Serbian Davis Cup teammate. “I’m sure he’s excited to play on a big stage. He doesn’t have much to lose. He’s on his dream run. He’s a young player that is just starting, so I’m sure his career will be very good.”

Other men’s fourth-round matchups set up for the middle Sunday — traditionally an off day, that is now a scheduled day of play for the first time in the tournament’s 145-year history — are No. 5 Carlos Alcaraz vs. No. 10 Jannik Sinner, No. 23 Frances Tiafoe vs. David Goffin, and No. 30 Tommy Paul vs. No 9 Cam Norrie.

Djokovic is eyeing a seventh career title at Wimbledon and 21st major championship overall. Only one other man on the top half of the bracket ever has been to the fourth round at the All England Club in the past: Goffin.

And Djokovic is the only man still around who reached last year's quarterfinals.

“I've been playing better and better as the tournament progresses,” Djokovic said. “I always expect the highest of myself.”

Women’s fourth-rounders Sunday are No. 3 Ons Jabeur vs. No. 24 Elise Mertens, No. 12 Jelena Ostapenko vs. Tatjana Maria, Marie Bouzkova vs. Caroline Garcia, and Heather Watson vs. Julie Niemeier. One of those players will play for the championship; the only one who’s ever participated in a Grand Slam singles final previously is 2017 French Open champion Ostapenko.

Watson, a 30-year-old from Britain, made her Grand Slam debut in 2010 and this is her 43rd appearance at one of the sport’s four most important tournaments. It is the first time she has reached the fourth round (same for Niemeier, whose only previous major showing was a first-round exit at this year’s French Open).

“Yeah, I was just sort of waiting for it to happen,” Watson said. “I waited long enough, I think.”