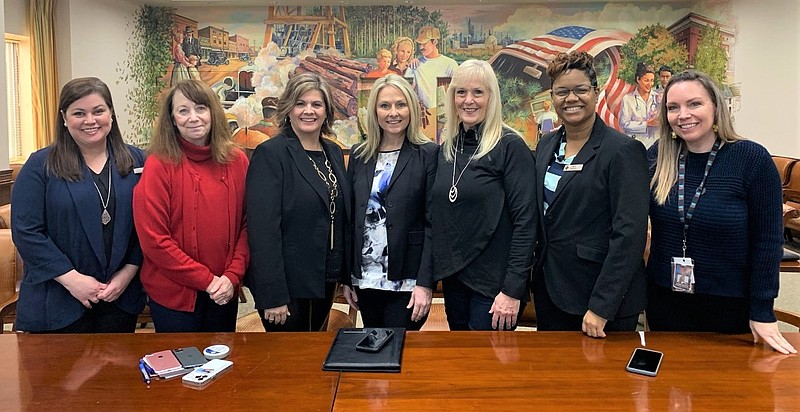 Members of an ad-hoc community committee put together a presentation and bid for El Dorado to serve as the host city for the 2023 Arkansas Governor’s Conference on Tourism. The group made a virtual presentation to state officials on the morning of Jan. 20 and learned a few hours later that El Dorado had won the bid to host the conference. Members of the committee include, from left, Tiffany Olson, director of sales for The Haywood El Dorado, which will serve as the host hotel for the conference; Sara Coffman, executive director of the South Arkansas Symphony Orchestra; Beth Brumley, executive director of Main Street El Dorado; Pam Griffin, president and chief executive officer of MAD; Dianne Hammond, a member of the El Dorado City Council and the El Dorado Advertising and Promotion Commission; Maria Simpson, general manager of The Haywood and a member of the A&P commission; and Joanna Benson, marketing coordinator for MAD. (Contributed)

What does the city of El Dorado have to offer the rest of the state in the way of tourism and southern hospitality?

Local residents and community leaders will have the opportunity to answer that question and showcase area amenities when the city hosts the 2023 Arkansas Governor’s Conference on Tourism.

Considered the premier tourism event in the Natural State, the annual conference celebrates tourism and highlights its impact as one of the top industries in Arkansas.

On Friday, several members of a group who worked on the bid proposal and presentation to hold the conference in El Dorado next year gathered at the El Dorado-Union County Chamber of Commerce for a formal announcement and to discuss what the opportunity means for the city.

Their excitement was palpable and the air seemed to crackle with exuberant energy in the chamber’s Charles H. Murphy Boardroom, with Dianne Hammond, a member of the El Dorado City Council and the El Dorado Advertising and Promotion Commission, saying that she was up until 3 a.m. Friday morning, unable to sleep after learning the previous day that El Dorado had won the bid to host the 46th annual conference.

Landing the bid holds even more significance for the city.

Not only will the AGCT be held in El Dorado for the first time in its nearly 50-year history, the city also redeemed an opportunity that was lost a few years ago after a winning bid to host the 42nd annual conference was revoked.

El Dorado had been selected by the Arkansas State Parks, Travel and Recreation Commission as the host city for the 2019 AGCT.

City officials learned in January of 2018 that El Dorado was one of two finalists that had submitted a proposal to serve as host city for the 2019 affair.

El Dorado edged out Fayetteville to win the bid.

Daily said the decision was difficult for the conference’s planning team.

The reason? A lack of adequate lodging accommodations for conference attendees in El Dorado.

Each year, the AGCT attracts an average of 500 to 700 people in the tourism/hospitality industry from Arkansas and surrounding states.

In 2018, there was a maximum capacity of approximately 650 hotel rooms in the city.

“… the quantity of (hotel) rooms needed to host the event (in El Dorado) is no longer available …The community of El Dorado has been wonderful to work with during our initial planning for the conference,” Dailey announced in a press release.

Mike Dumas, former El Dorado mayor who served as president and CEO of the chamber of commerce in 2018, and Hammond said the maximum capacity of hotel rooms would not accommodate visitors for the conference and contract workers that were expected in town for major repair and maintenance projects at local industries.

The work coincided with the 2019 conference.

The year has come and members of the ad-hoc committee said the time is ripe for El Dorado to put the rest of the state on notice that it is a major contributor to Arkansas’s tourism economy.

With 700-plus hotel rooms and other lodging accommodations now available in the city, El Dorado is more than capable of handling an average AGTC crowd.

Community leaders expressed disappointment upon hearing that the 2019 conference would be moved to Hot Springs and they were further disheartened when an offer to submit a bid for the 2020 conference was declined, with state officials explaining that the city would have to wait three years to re-bid.

Candlewood Suites opened in El Dorado in early 2018, around the same time city officials were notified that El Dorado has been selected to host the 2019 conference.

In the years since the announcement of the event relocation, Fairfield Inn and Suites by Marriott has opened with 75 rooms and The Haywood, a boutique hotel and a part of the Tapestry Collection by Hilton, has added another 70 rooms.

The Haywood will serve as the host hotel for the 2023 AGCT and Mule [email protected], the primary food and beverage service. Both facilities are part of the MAD entertainment complex in downtown El Dorado.

Earlier this month, Hammond told fellow A&P commissioners that efforts were under way to pursue a bid for the 2023 AGCT and she asked that the word about the project be kept under wraps until the bid process was completed.

Hammond explained Friday that the group was notified in late December that El Dorado was eligible to make a presentation to state officials for next year’s conference.

A team made of up several local entities that trade in tourism, entertainment and economic development was hastily assembled and they set about submitting bid forms and preparing a formal presentation.

Members of the team include Tiffany Olson, director of sales for The Haywood El Dorado, which will serve as the host hotel for the conference; Sara Coffman, executive director of the South Arkansas Symphony Orchestra; Beth Brumley, executive director of Main Street El Dorado; Pam Griffin, president and chief executive officer of MAD; Hammond; Maria Simpson, general manager of The Haywood and a member of the A&P commission; Joanna Benson, marketing coordinator for MAD; Jaren Books, membership and events coordinator for the chamber of commerce; Courtney Crotty, philanthropy and community relations supervisor for Murphy USA; and the Diamond Agency, the A&P commission’s ad agency of record.

Hammond and Coffman said committee members learned on Jan. 14 that El Dorado was one of three cities — Rogers and Hot Springs were the other two — that had been selected to make a formal presentation to state tourism officials and that the presentation was scheduled at 9:30 a.m. on Jan. 20, via Zoom, an online teleconferencing service.

A fourth finalist, Fort Smith, pulled out of the bid process prior to the presentations, committee members said.

Hammond said the chamber offered the use of its boardroom for the presentation, which included a promotional video that was prepared by the Diamond Agency and detailed the city’s oil-boom history and the transformation the city has undergone to rebrand itself, revitalize its historic downtown and develop tourism and entertainment as another economic driver for El Dorado.

An announcement last fall that El Dorado has been named the Best Small Town Cultural Scene in the 2021 USA Today’s 10Best Readers’ Choice Awards did not hurt the city’s chances during the bid process for the governor’s conference and the mention of the award in the video impressed state officials, committee members said.

“After the presentation, several of them said they had never been to El Dorado before,” Hammond said.

Several of the committee members said it is a common refrain they have heard over the years when traveling to the governor’s conference and other tourism/hospitality events throughout the state.

“A lot of people don’t like to come to south Arkansas. A lot of them haven’t been here since MAD opened,” Brumley said. “El Dorado is a hot spot — people are aware of the things we’re doing with MAD and our events but they said they have not made it down here yet.”

MAD held its grand-opening celebration in the fall of 2017 and Griffin said hosting the AGCT will serve as another grand opening, of sorts, for MAD and the city as a whole.

Members of the committee, who were joined Friday by Union County officials, including county Judge Mike Loftin and Quorum Court member Greg Harrison, said they have spoken with hotel managers across the city about preparations for the 46th annual conference, which is slated for Feb. 26-28, 2023.

“The exciting thing about this is, we got it, Now, the work begins,” Coffman said, referring to planning for the conference.

Coffman said members of the committee and pooled their talents and various areas of expertise to bid for the event and will continue to do so during the preparation phase.

She and Simpson said the effort will call for unity citywide.

Loftin said the county is ready and willing to contribute in any way it can to make the conference a success and present southern hospitality, El Dorado style.

Brumley and Olson agreed, with Brumley saying the committee can arrange transportation to take attendees on tours to see local amenities outside the tourist-heavy downtown area.

Olson also pointed out that the conference will be filled with state government officials and tourism-industry professionals from all around Arkansas.

Near the end of the video that was shown during the bid presentation, the narrator punctuated the pitch with a reference to the USA Today award.

“The Best Small Town Cultural Scene is also the best choice for the 2023 governor’s conference on tourism.”