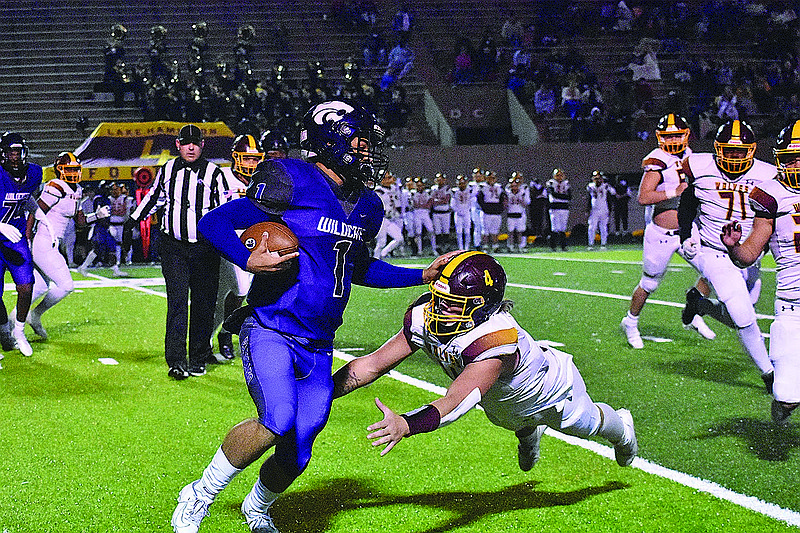 El Dorado quarterback Sharmon Rester tries to fend off a tackle against Lake Hamilton. Rester received a Division I scholarship offer from Lamar on Saturday. The National Signing Day is Feb. 2.

Rester, who led the Wildcats to the 6A State Championship this past season, was offered by Lamar University. The Cardinals, of Beaumont, Texas, compete in the Western Athletic Conference.

“It’s a wonderful thing, well deserved. He’s worked very hard for that,” said Jones. “Lamar came down this week and put him through a workout at the high school and invited him and his family down for an official visit this weekend. He got there Friday after lunch and stayed overnight. At the end of the visit, they offered him a scholarship.

“I’m really excited for him. His dream is to be a Division I quarterback and now he has an opportunity to do that.”

Rester, who did not commit, threw for 3,537 yards and 41 touchdowns, completing 179-of-290 attempts with just eight interceptions. He also rushed for 935 yards and 10 touchdowns, averaging 7.0 yards per carry.

Along the way, Rester set school records for yards per completion in a career, single season passing yards, touchdown passes in a season and passing yards in a game.

The National Signing Day is Feb. 2. Rester has other offers but Lamar is the first Division I.

“Some great players have already committed,” Jones said. “We anticipate we could, on National Signing Day, we could have up to nine, potentially 10 guys, with either scholarship offers or chances to walk on. That’s awesome for our program to have that many in one class with a chance to play on Saturdays.”