Winter weather to hit today, but unlikely to last long 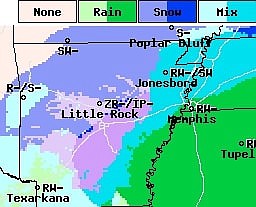 A wintry mix of precipitation is expected to hit the area Saturday evening. (Courtesy of the National Weather Service)

According to the NWS, rain will begin to fall this afternoon, and the precipitation will likely turn into a wintry mix of snow and rain overnight.

"What's going to happen is we're going to get a lot of cold air coming in overnight and as precipitation exits the region, some of it may convert to a wintry mix, starting out as rain and possibly turning into a rain-snow mix," Mayeaux, who works in the Shreveport NWS office, explained.

However, it's unlikely that any snow that falls will stick to the ground, and if it does, it will likely only be able to be spotted on grassy or elevated areas, Mayeaux said.

"I don't suspect that we're going to see any accumulations with this because we're really on expecting to see less than an inch," he said. "The ground temperatures are going to be warm, so it's going to be hard for it to stay. You may see bridges and overpasses possibly freeze up."

Day- and nighttime temperatures will be lower today than they have been throughout the earlier part of the week, the NWS predicted Friday, but by Tuesday, the air will is expected to warm to the low 60s during the day.

Mayeaux said the winter weather is being caused by a low pressure system coming through the area.

"We have an upper-level low pressure system coming through, and what happens is you get moisture behind the low (pressure) -- we call it wrap-around moisture -- and that's what's going to be causing the rain-snow mix," he said.

The region was under a Hazardous Weather Outlook on Friday due to the winter storms in the forecast. The outlook did not foresee travel impacts as of Friday, but Mayeaux did advise anyone driving in the rain or snow today to be cautious.

"Be careful on the roadways, especially on bridges and overpasses. Even though you may not see ice on the roads, when you get to bridges, that's a different story; you may encounter slick areas," he said. "Also, prepare for anything. If you need to go to the store, I would stock up on things early if you're not comfortable getting out in that kind of weather."

He also encouraged those with elderly friends and family members to check in on them during the storm.

"With it being possibly icy, and you'll have cold temperatures -- freezing -- having that connection and being careful, being sure they're safe, is important," he said.

As for whether local residents can expect snow that sticks any time this winter, Mayeaux said there's always a chance.

"We could possibly see snow, like we did last year in February, all the way through much of February. It's possible something could occur," he said. "It's not until you get to March that the chance of snow storms really drops off."