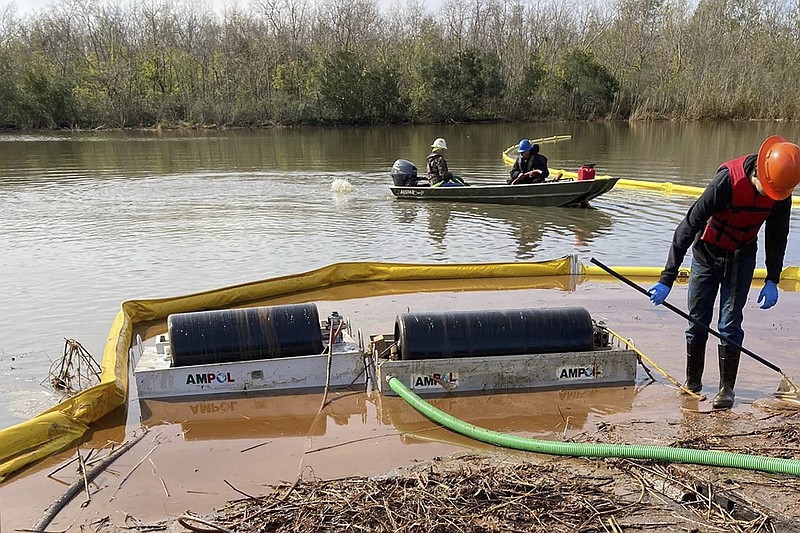 This undated photo provided by the Louisiana Department of Environmental Quality on Wednesday, Jan. 12, 2022, shows cleanup work at the site where more than 300,000 gallons of diesel spilled on Dec. 27, 2021, just outside New Orleans. An October 2020 inspection revealed external corrosion along a 22-foot section of pipe in the same area as the spill. But documents show repairs were delayed after a subsequent inspection indicated the corrosion was not bad enough to require work immediately under federal regulations. (Louisiana Department of Environmental Quality via AP)

NEW ORLEANS (AP) -- A severely corroded pipeline ruptured and spilled more than 300,000 gallons of diesel fuel just outside New Orleans after the operator delayed needed repairs, according to federal records.

Most of the fuel drained into two artificial ponds called "borrow pits" and thousands of fish, birds and other animals were killed, state and local officials said Wednesday. The spill also contaminated soil, according to state and federal officials.

The pipeline's owner said 315,000 gallons of fuel with some water mixed in had been skimmed and recovered, primarily from the ponds. Cleanup work is ongoing.

The spill from the 16-inch-diameter line operated by Collins Pipeline Co. was discovered Dec. 27 near a levee in St. Bernard Parish, just east of New Orleans, according to documents from the Pipeline and Hazardous Materials Safety Administration. The spill had not been previously publicly reported.

An inspection of the 42-year-old Meraux Pipeline more than a year earlier, in October 2020, revealed external corrosion along a 22-foot section of pipe at the same site as the spill, federal records show.

The spilled fuel also contaminated soil in an environmentally sensitive area near the Mississippi River Gulf Outlet, a closed canal, according to state and federal officials. A small amount of diesel remains in the two borrow pits, said Louisiana Department of Environmental Quality spokesman Gregory Langley.

The spill killed 2,300 fish and more than 100 other animals, including 39 snakes, 32 birds, a few eels and a blue crab, according to statistics provided by Robert "Trey" Iles, a spokesman for the Louisiana Department of Wildlife and Fisheries.

Diesel is a highly toxic petroleum product that can kill fish and plants that come into direct contact with it, according to the National Oceanic and Atmospheric Administration. Fuel from small spills can evaporate or disperse naturally in just a couple of days but larger spills can take months to degrade.

A pipeline safety advocate said it was "maddening" the corrosion was known about for more than a year prior to the spill yet fuel kept flowing through the 125-mile-long line from Chalmette to a storage terminal in Collins, Mississippi.

"It's especially maddening to learn that Collins Pipeline's initial analysis deemed the pipe in such poor condition that it warranted an immediate repair," said Bill Caram with the Pipeline Safety Trust. The Bellingham, Washington-based organization advocates for more stringent oversight of the nation's sprawling network of pipelines transporting oil, natural gas and other hazardous fuels.

Collins Pipeline is a subsidiary of Parsippany, New Jersey-based PBF Energy Inc., which owns six petroleum refineries in the U.S., including the Chalmette Refinery in St. Bernard Parish.

The company repaired the line at a cost of $500,000 and resumed operations last Saturday, PBF Vice President Michael Karlovich told the Associated Press in an email. An environmental damage assessment is pending, he said.

"Although we continue to remediate and monitor the area, on-water recovery operations have been completed," Karlovich said. He said the site is about 4.5 miles from the Mississippi River, not just a few hundred feet away as federal officials said.

In an order to PBF Chairman Thomas Nimbley describing the steps the company had to take before it restarted the line, the associate administrator of the federal pipeline safety agency, Alan Mayberry, identified the probable cause of the spill as "localized corrosion and metal loss" based on preliminary reports.

More than two months before the spill, a PBF Energy representative said in an October 2021 email to federal pipeline regulators that the company had completed repairs on another flawed section of the line, but was still awaiting approval to address the corrosion found in the vicinity of the rupture site, according to federal records.

The company already had reduced pressure inside the line in November 2020, shortly after the corrosion was first found. The company reduced the pressure slightly more in November 2021 because it had not repaired the line within a time frame required under federal regulations, according to pipeline officials.

Federal regulators have initiated six enforcement cases against Collins Pipeline since 2007. They include a 2021 warning letter alleging management problems at the company's pipeline control room in Texas and a 2011 warning for not conducting external corrosion tests frequently enough, federal records show.

No fines or other penalties were levied against the company, according to the records. 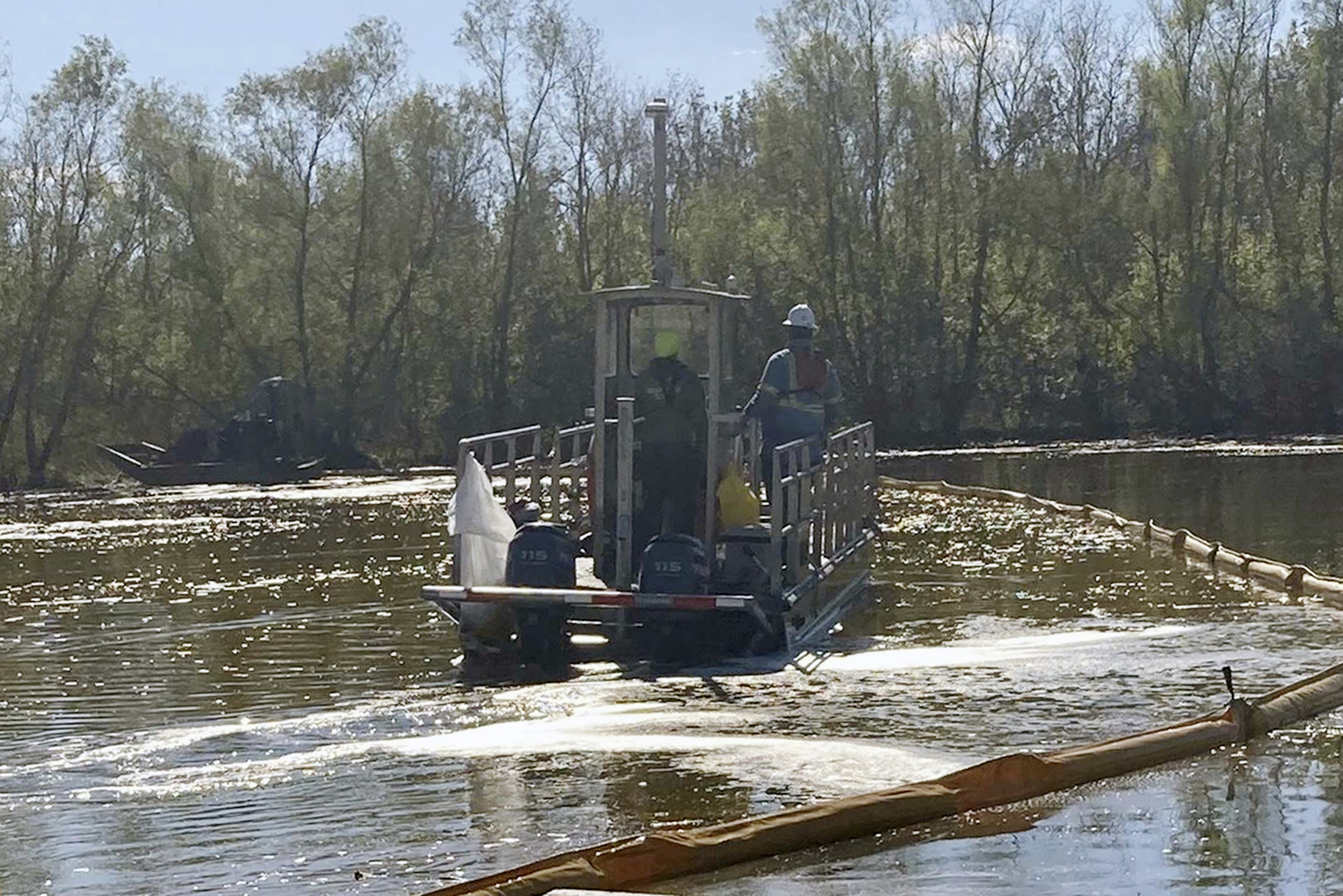 This undated photo provided by the Louisiana Department of Environmental Quality on Wednesday, Jan. 12, 2022, shows cleanup work at the site where more than 300,000 gallons of diesel spilled on Dec. 27, 2021, just outside New Orleans. An October 2020 inspection revealed external corrosion along a 22-foot section of pipe in the same area as the spill. But documents show repairs were delayed after a subsequent inspection indicated the corrosion was not bad enough to require work immediately under federal regulations. (Louisiana Department of Environmental Quality via AP)