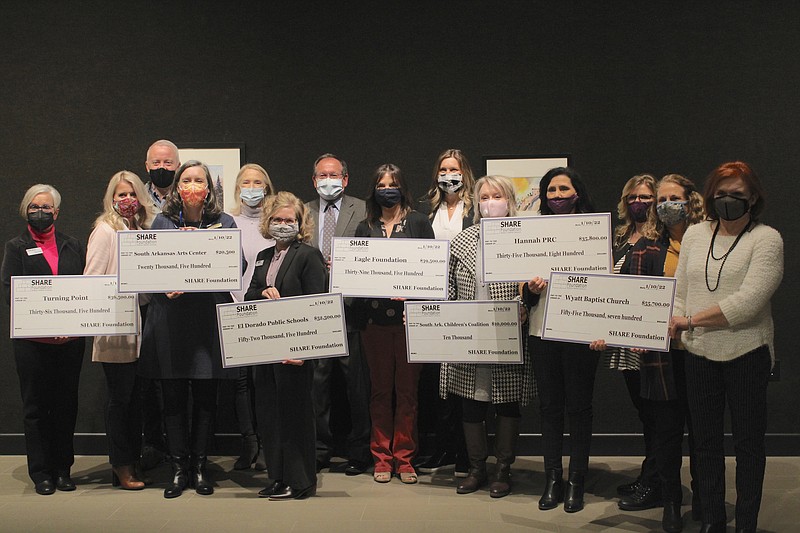 In a quiet ceremony in the South Arkansas Arts Center's Merkle Gallery on Monday, representatives of seven local nonprofits spoke about how grants they'd just received from the SHARE Foundation would impact the community.

The fifth round of Violence Intervention Plan (VIP) grant awards were handed out Monday morning and totaled $250,000 across the seven recipient organizations.

The VIP program, designed to help curb violence and crime in the community, first kicked off in 2018, after two years of research into what Union County's most pressing needs were.

The program is divided into two main focus areas, each with three of their own components: community involvement, which targets mentoring and role modeling, re-entry, and clean, safe neighborhoods; and family support, which targets parenting and life skills, job and targeted education, and mental health and substance abuse.

Many readers have likely seen the rainbow wheel showing the different VIP target areas that accompanies the SHARE Foundation's monthly column in the News-Times.

Since the VIP's inception, nearly $1.4 million has been granted to area nonprofits to address the challenges Union County faces.

"It was a really tough grant decision year," said Debbie Watts, SHARE Foundation vice president of community impact, on Monday. "We're very excited to work with (our grant recipients) in 2022."

- The Eagle Foundation, which received $39,500 to broaden services at the Eagle Learning Center and expand its reach into the Strong-Huttig School District.

The Eagle Foundation is an education and mentoring-focused nonprofit based in Union County. The EAGLE Learning Center, the organization's tutoring and mentorship hub, provides a space for students with different learning styles to receive small group and one-on-one instruction from compassionate mentors recruited from local churches, schools and other nonprofits.

Executive Director Jennifer Wylie said on Monday that the grant funds will help to expand the education center by providing for training for mentors and tutors, particularly in the areas of dyslexia and dyscalculia intervention through the "Take Flight" curriculum.

She also noted that the funds would help offset the cost of the learning center services.

Implementation of the new system, which will center around on trauma-informed, evidenced-based curriculum that district staff and faculty will be trained in, will begin at the start of the 2022/2023 school year, said Jennifer Lee, director of special programs for the ESD.

Lee said on Monday the district is down to two choices for the curriculum they will use for the new system, and district officials are planning to visit schools that use both of the learning models to make the final decision before the new school year starts. Both programs, she said, are designed to help children's social and emotional development by creating safe, reliable environments where students feel supported and can develop positive relationships.

"We've been living through a pandemic ... and our kids and their social/emotional needs, those have just been amplified by the pandemic," Lee said on Monday. "For our students, not only have they experienced learning loss, but they're in a place right now where they need more social/emotional support... Hopefully, the work we do in the schools will help prevent some of the long-term effects of mental health, substance and drug abuse problems. Hopefully it will help decrease issues in Union County as kids get older."

The grant addresses the mentoring focus area of the VIP. The El Dorado School District previously received a VIP grant in 2020.

- Hannah Pregnancy Resource Center, which received $35,800 for its A New Hope program.

The New Hope program was introduced last year, though many of its components have been implemented at the HPRC for several years. The program is delivered in two ways: first, to men and women incarcerated at the Union County Detention Center who receive life-skills education while they're in jail; and second, to men and women who attend parenting classes through the HPRC.

Paula Williams, HPRC executive director, said she's hoping to give women who are part of the nonprofit's "Earn While You Learn" program -- where those who attend parenting classes can earn money to purchase items for their children at the center's Baby Boutique -- an online option for attending classes, because many of them work during the day and have a hard time attending regular in-person classes.

Jackie Stratton, the HPRC's re-entry and outreach coordinator, said the nonprofit has also partnered with the Union County Sheriff's Office to train one of the nurses that staffs the county jail on the parenting and life skills curriculum the nonprofit utilizes so that she can deliver one-on-one training with inmates.

"People that are re-entering society from incarceration or addictions, they haven't, most of the time, been a functioning adult in society, and it's hard to learn those skills ... We help them navigate those resources so that they can find the help they need," Stratton said. "We have a 37 year-old woman who came into our program in 2020. She had several charges ... We talk at least twice a month; I provide resources and things for her while she's in prison. It's not just something we want to do right in the Union County jail, but we want to follow them. When she comes back to Union County, she'll have the resources she needs to be productive. That's what we do."

The grant addresses the parenting and life skills and re-entry focus areas of the VIP. The HPRC has previously received VIP grants in 2018, 2019, 2020 and 2021.

- South Arkansas Arts Center, which received $20,500 for its "Adventures in the Arts Academy" program that provides class scholarships and memberships to children in the community.

SAAC offers a wide variety of arts programming for children -- everything from ballet and musical theater jazz dance to graphic design, the intersection of art and science, drama and more. The arts center has long been a bastion of culture in south Arkansas, and Executive Director Laura Allen said Monday that she hopes the scholarships funded by this year's grant will help to expand SAAC's reach to more children in the community.

"Because of this grant, we can say that we have scholarships for any kid that's not able to pay for classes," Allen said on Monday. "We've been able to track their attendance at school, their grades at school and their behavior and in all of those areas, they are more successful. So it's not just about the artistic skills they learn, which are wonderful, and it's not just about the fun that they have, which is also wonderful -- it's about how that affects them everywhere else in their life; that empathy that we've been talking about in this room, that critical thinking, that creativity doesn't just help them in the art classroom, it helps them everywhere."

According to information provided by the SHARE Foundation, this year's grant will help SAAC award 175 scholarships for after-school classes, camps, workshops and other lessons. Allen said the children who receive scholarships will also become SAAC members, allowing them reduced-cost entry to SAAC theater productions.

The Children's Coalition will be partnering with HOPE Landing to offer the new therapy, which Executive Director Robin Krneta said she hopes to eventually bring on-site.

Krneta explained on Monday that children who participate in the program will learn about the horses they interact with and eventually groom and pet them; they won't ride them, she noted. She said children who have been through traumatic abuse often have a hard time forming bonds, and this is where the horses come in.

"I tell people all the time, especially when you're working with children, but even adults: when you look at their behavior, ask why, not what. So many times as a society, I think we want to write off these kids, and even adults," Krneta said. "Because of trauma in their life, they still have a hard time bonding, forming relationships. ... It's amazing what these animals can do. They're large animals and they're hyper-sensitive to everything around them and they actually mirror, kind of, what you're feeling when they're in front of you... It's amazing what they're able to accomplish with these children."

The grant addresses the mental health focus area of the VIP. The Children's Coalition has previously received VIP grants in 2018 and 2019.

- Turning Point, which received $36,500 to continue providing services to victims of domestic violence and to offer violence prevention education to children in Union County.

Jennifer Davis, executive director of Turning Point, explained on Monday that the nonprofit's mission is two-fold: to intervene in the lives of men and women facing domestic violence (DV), and to prevent local residents from becoming involved in violent relationships.

She said the nonprofit was working on Monday with students in the Junction City School District on the prevention component of the mission by providing education from the "Safe Dates" program, which teaches children about healthy relationships, red flags in relationships, dating and partner violence.

She also spoke about the Turning Point shelter, which gives victims of DV a place to stay while also providing life skills education and helping them move on from their violent relationships. Davis said Monday that the shelter has served all ages, including by connecting clients with mental health treatment services.

"We're just here (for our clients) -- whatever that means, in whatever capacity they need. We're here with them," Davis said on Monday, becoming emotional as she recounted two stories about Turning Point residents she's worked with. "This is about so much more than this grant. We're going to be able to share our hearts with people in their darkest hours."

The grant addresses the mental health and mentoring focus areas of the VIP. Turning Point has previously received VIP grants in 2018, 2019 and 2020.

- Wyatt Baptist Church, which received $55,700 to expand its Adopt-a-School program.

Since 2013, Wyatt Baptist has facilitated the mentorship of El Dorado children through the national Adopt-a-School program founded by Dr. Tony Evans in Dallas, Texas in the 1980s. Currently, 44 mentors from eight local churches mentor students for one hour each week, and more mentors who would like to work with children this year are ready now for the required training.

When a church "adopts a school," members of that church who undergo the training are paired with a public school student who they mentor throughout their school career. Program Director Vicki Harmon said that two girls she began working with years ago as fourth-graders are now juniors in high school, and she has close relationships not only with them, but their families as well.

"We don't just know these kids; we know their families, their siblings, their parents. We follow these children, meeting for one hour a week at the public schools ... through their lives," Harmon said. "It's made a huge difference. I know God has great plans."

An informational meeting for churches who wish to participate in the program is scheduled for Saturday, Jan. 15; for more information about the meeting, contact Harmon at 870-862-2619.

"It's hard to say anything that everyone will agree on these days, but I can think of two things I think everyone in this room will agree on: one, the problems that you are trying to solve, the pain you're trying the relieve, the issues you're trying to solve are nearly endless; and two, in the nonprofit world, there's never enough money," said SHARE Foundation Board Chairman Steve Cousins. "It's an honor to be able to help you all meet these goals."