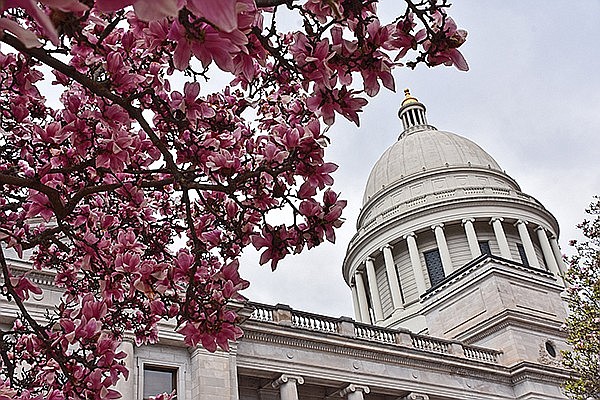 The state Capitol building is seen in this file photo.

Arkansas lawmakers will start holding budget hearings Tuesday for state agencies in advance of their Feb. 14 fiscal session, with one potential topic being the next steps for the state's health insurance plans for public school and state employees.

"I think this health insurance has gotten a lot of people wondering," a Joint Budget Committee co-chairman, Rep. Lane Jean, R-Magnolia, said Thursday, referring to the insurance plans for more than 100,000 current and retired public school and state employees.

"Hopefully, we will get some answers before we go in, so we'll have a game plan," he said. "I don't know what the game plan is because there is too much up in the air."

Jean referred to uncertainty about how much more state money is needed by the plans and about several draft bills concerning the plans, including whether the bills will be considered in a special session or the fiscal session.

A Legislative Council co-chairman, Rep. Jeff Wardlaw, R-Hermitage, said Friday that he hopes to publicly release six bills relating to the two health insurance plans by the end of this week.

Senate President Pro Tempore Jimmy Hickey, R-Texarkana, said he believes the state needs to provide about $28 million more for the school insurance plan in fiscal 2023 and use money in the state Department of Education's fund balances to finance that.

"I want us to have everything in place by January of 2023" to implement for the two insurance plans, he said.

Gov. Asa Hutchinson said Friday that "the details are still being ironed out" about the funding he will propose for the two plans.

In November, the Legislative Council approved a consultant's recommendations aimed at stabilizing funding and cutting costs for the two health insurance plans. The Segal Group consulting firm recommended that the state link future funding increases for the two insurance plans to an inflation measure, such as the health care consumer price index.

The major topics for the budget hearings include the governor's proposed budget, plus money for Medicaid and education. An element of the proceedings will be the ongoing COVID-19 pandemic.

The governor's proposed general revenue budget for fiscal 2023, which starts July 1, will be presented Tuesday morning to a joint meeting of the Joint Budget Committee and Legislative Council.

Hutchinson said the budget will reflect the proposal submitted in November 2020 "with adjustments." He said in a written statement that his proposed budget "supports my WINS in 2022 goals." WINS stands for workforce development, infrastructure, new economy jobs and strengthening Arkansas families, he said.

The state Department of Finance and Administration's latest revenue forecast, released Dec. 16, projects a $264.4 million surplus at the end of fiscal 2022 after factoring in the income tax cuts enacted in December's special session and a projection for higher economic growth.

According to National Conference of State Legislatures spokesman Lisa Ryckman, "As legislatures gear up for the next session, the usual issues top their to-do lists: budget, health care and education.

"But [this] year promises some new twists on those perennials, along with other hot topics and policy trends that NCSL experts predict will grab the attention of lawmakers across the nation," Ryckman wrote on the organization's website.

For example, "states are awash in federal stimulus funds, and policymakers will need to think about spending the money on one-time expenditures, rather than creating ongoing costs with expanded programming," she said.

On Dec. 14, Hutchinson said he would ask the General Assembly to devote $37.6 million of his proposed $66 million increase in the Medicaid general revenue budget in fiscal 2023 to create more slots to provide services for some of the developmentally disabled people on a waiting list.

The waiting list -- at that time, of 3,204 people -- was for Arkansans with intellectual and developmental disabilities who want to stay in their home and communities but need help getting services to do so.

Hutchinson, who leaves office in January 2023, proposes to provide services to all of them by June 2025.

At that time, the Republican governor said the state was submitting a waiver request to the federal government to have 200 more slots for people to receive services that will be funded with existing revenue.

In November 2020, the governor submitted a projected general revenue budget of $1.439 billion for the state's Medicaid program in fiscal 2023, up from the current fiscal 2022 budget of $1.373 billion.

Asked about the prospects for Hutchinson's proposal to eliminate the developmental disability waiting list, Jean said, "I don't know what we'll end up with.

"But I think there has been enough people with that problem that we are going to throw some money and try to fix some of it, if not all of it," he said. "I would anticipate some kind of resolution to that problem."

The state has been receiving a higher federal matching rate for the traditional Medicaid program under the federal government's public health emergency since Jan. 1, 2020.

Arkansas has been getting an enhanced rate of 77.51%, compared to the state's regular rate of 71.31%, said state Department of Human Services spokeswoman Amy Webb. The state provides the rest of the money for those Medicaid programs.

"Because we are receiving the enhanced [rate], this has taken pressure off the use of our state matching dollars (both General Revenue and Other sources)," she said in a written statement.

"Overall, Medicaid spend is growing due to the growing enrollment," Webb said. "[D] ue to the public health emergency, we can only remove people from the Medicaid rolls under certain circumstances, which has caused the rolls to have more people than is typical."

The state's Medicaid program had 1,067,783 participants as of Nov. 1, according to the latest information on the state Department of Human Service's website. That's up from 899,503 participants in the program on March 1, 2020, prior to the finding of the first case of COVID-19 in Arkansas.

The federal government's public health emergency lasts until mid-January and "we expect it will be continued," Webb said.

Asked what will happen to Medicaid's total enrollment after the end of the public health emergency, she said the U.S. Centers for Medicare and Medicaid Services "gives states 12 months to transition clients off of Medicaid rolls who but for the public heath emergency would not have been eligible," and state law "gives us six months to do that."

But the House and Senate Education Committees recommended an $86.7 million increase in fiscal 2023, their recommendation to provide an adequate education for public school students.

In addition to funding from state general revenue, money for educational adequacy in the public schools comes from a 0.875% portion of the state's 6.5% sales tax and from the 25 mills of property tax raised by counties, said Kimberly Mundell, a spokeswoman for the state Department of Education.

Other education programs also will be in the budget.

Rep. Ken Bragg, R-Sheridan, who made a pitch for state general revenue funding for the University of Arkansas at Monticello's Center for Forest Business in last year's regular session, said last week, "We met with the governor a few weeks ago and got a commitment for full funding in the next budget." Hutchinson spokeswoman Shealyn Sowers said Friday in a written statement that "the governor met with legislators and UAM staff last year and agreed to fully fund the program.

"This will be reflected in the 2023 balanced budget presented Tuesday," she said.

UA-Monticello seeks about $850,000 a year in ongoing funding for the Center for Forest Business, said Jeff Weaver, vice chancellor for advancement and chief of staff at the university.

Last year, Hutchinson authorized the release of $450,000 from the state's rainy-day fund to support the Center for Forest Business to "assess and address solutions to Arkansas's market in timber processing and production," according to his letter dated May 27 to Finance and Administration Secretary Larry Walther.

Matthew Pelkki, director of the Center for Forest Business, said the $450,000 has been used to hire three forest economic specialists and the center has completed several projects in the past six months and is working on several others.

Another request for funds is coming from Rep. Joe Jett, R-Success, who said he is seeking $4.6 million in one-time state funds to build barracks at the Black River Technical College in Pocahontas, largely for its law enforcement training academy.

The proposed facility would include 30 rooms with twin beds and five instructor rooms.

Karen Liebhaber, vice president of institutional advancement at the college, said, "With the continuation of COVID, we recognized how this project could be morphed to address some of the healthcare training needs in the state by using this facility to provide accelerated EMT, nursing, and first responder training."

Sen. Joyce Elliott, D-Little Rock, said she would like to see the Legislature provide $5 million for the state's Housing Trust Fund.

If the Legislature in last month's special session found the money to finance tax breaks, there is no excuse not to provide this funding to respond to housing problems, she said. The trust fund would be used to help renters and landlords, Elliott said.

Act 661 of 2009, sponsored by Elliott, created the Arkansas Housing Trust Fund at the Arkansas Development Finance Authority. The authority is required to seek the input of an 11-member advisory committee under that law.