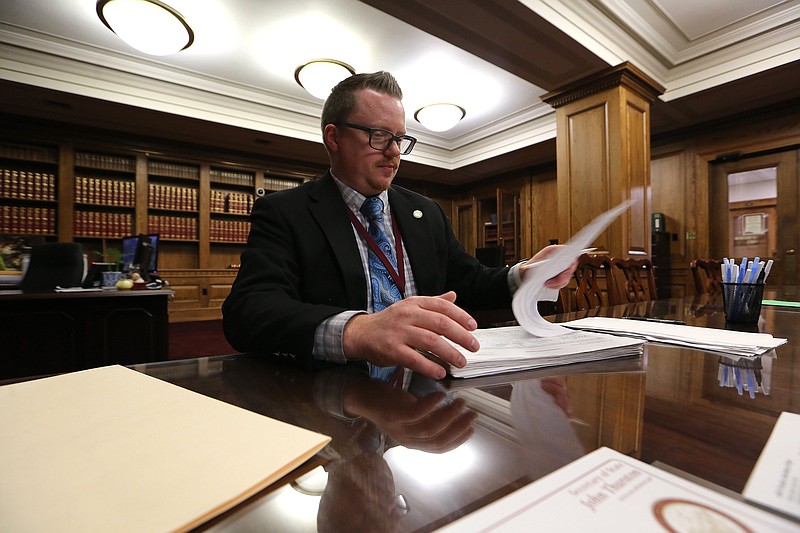 Thirty candidates for judicial offices filed petitions for ballot access by Friday's deadline, less than half the number expected by the secretary of state's office.

The COVID-19 pandemic has presented several challenges to elections over the past two years and that included affecting the process for gathering signatures for petitions.

Starting Dec. 31, candidates for judge and prosecutor could file petitions to avoid paying filing fees to get on the ballot for the May 24 nonpartisan election.

Those judicial and prosecutor candidates who chose to pay a fee will file Feb. 22 through March 1, the filing period for partisan candidates for other offices.

The fee varies per candidate.

The lowest filing fee is $4,240 for a prosecuting attorney Division B and can reach up to $11,970 for a chief justice of the Arkansas Supreme Court.

Kevin Niehaus, spokesman for the Arkansas secretary of state's office, said that typically, the first day of judicial filing is the busiest, but Monday, only 10 candidates had filed.

"Given the number of seats open this election, we estimated about 70 people would file by petition," he said in an email. "Typically 70% of the nonpartisan candidates will file by petition but as you can see the numbers are down dramatically.

"I assumed this is due to COVID and candidates not wanting to get petition signatures," Niehaus said.

David Sachar, executive director of the Arkansas Judicial Discipline and Disability Commission, said as far as he knows, no requests for extension of the petition deadline have been granted.

"I know there have been some requests, not just from judicial candidates, to change the rules, but they have all been denied," he said. "I was told it was a no all around. It's either get the petitions or pay."

Sachar said he couldn't for sure say the decline was all because of COVID-19 because election cycles vary from year to year.

"The 2020 cycle was a much bigger cycle than this year," he said. "Judicial cycles are not the same because you got to see who is up in 2022 compared to who is up in 2024. I don't know if [COVID] is the reason, but I am sure it has made it harder to get signatures. Common knowledge and logic would tell you that covid is playing a role."

State District Judge David Graham of Magnolia, who is running for circuit judge in the 13th Judicial Circuit, said any candidate navigating the holidays and COVID-19 to get signatures probably found out quickly how hard this election season will be.

"I had to rely on a lot more people besides myself due to the limited contact we could have," he said. "It was a lot of networking. It was friends of friends, colleagues and neighbors who made it possible. I would think this is the most challenging time to get signatures that I have ever experienced."

LaTonya Austin-Honorable, an attorney who is running for circuit judge in the 6th Judicial Circuit covering Pulaski and Perry counties, said this was her third time running for judge, and this was the most challenging because of in-person events being so limited this year.

"Even though I am confident we gained enough signatures, we had to work really hard this year to find people willing to sign," she said. "I am a people person, so this has been terribly difficult."

These challenges led to candidates getting creative in signature collection.

Brenda Stallings, an attorney who is running for circuit judge for the 12th Division, said she had to give herself a two-month deadline in November to ensure she had enough time to get the signatures she needed in the midst of the pandemic.

"We did have a lot of challenges," she said. "The first thing we did was order pens with our information on it that we gave out to people to keep when they signed the petition. ... We had literal buckets of pens we would carry around with us."

District Judge Stephanie Casady of Saline County, who is running for a position on the Arkansas Court of Appeals, said she was able to file her petition by going outside the normal group events.

"I had to knock on some doors, and I had a lot of people collecting petitions for me at their Thanksgiving gatherings and neighborhoods during the holidays," she said. "I will tell you on Nov. 8th it was a little overwhelming when you had to think about how you were going to get 2,000 signatures and you really need 3,000. It was nice to know you could pay the fee if necessary to get on the ballot, but it was almost $9,000, and I am happy to spend that somewhere else."

Austin-Honorable said her campaign had to canvass at churches and outside grocery stores instead of the normal neighborhood associations because of COVID forcing so many events to be held virtually.

"A lot of my support came from churches and things like parades," she said. "There were still two parades that were held last year, so we were able to use those two events to gather signatures, but this pandemic has changed up the way we can make physical contact. We had to go outside grocery stores, which is something we hadn't done in the past."

Austin-Honorable said she was definitely worried that she wasn't going to be able to get enough signatures because of the pandemic.

"I had money set aside," she said with a laugh. "My husband told me out the gate we weren't going to get those signatures, but I love a challenge. Fingers and toes crossed, we got the 2,000 signatures that we need so we don't have to pay that ridiculous filing fee."

Stallings shared that fear, saying her campaign had to pivot around Christmas time because she was afraid they weren't going to be able to gather enough signatures.

"We had to start calling people, and I started emailing the petition to people who were meeting with family members so they would be able to print out and sign it," she said. "Instead of meeting people in their homes, I had to communicate with people who wanted to know about the campaign via Zoom or phone calls."

Stallings said that even this week, she had to add even more safety measures as covid cases continued to spike.

"I had to ask people to put the petitions on their front door in a plastic bag so I could pick it up before filing," she said.

Devon Holder, a Pocahontas attorney who is running for prosecuting attorney for the 3rd Judicial Circuit, said he hasn't faced many COVID-19 challenges these past two months, but might have problems later on.

Austin-Honorable said she expects the pandemic to completely change the campaign process.

"Even if some people predict this will peak in a couple of weeks, I am convinced this is going to change the way we campaign," she said.