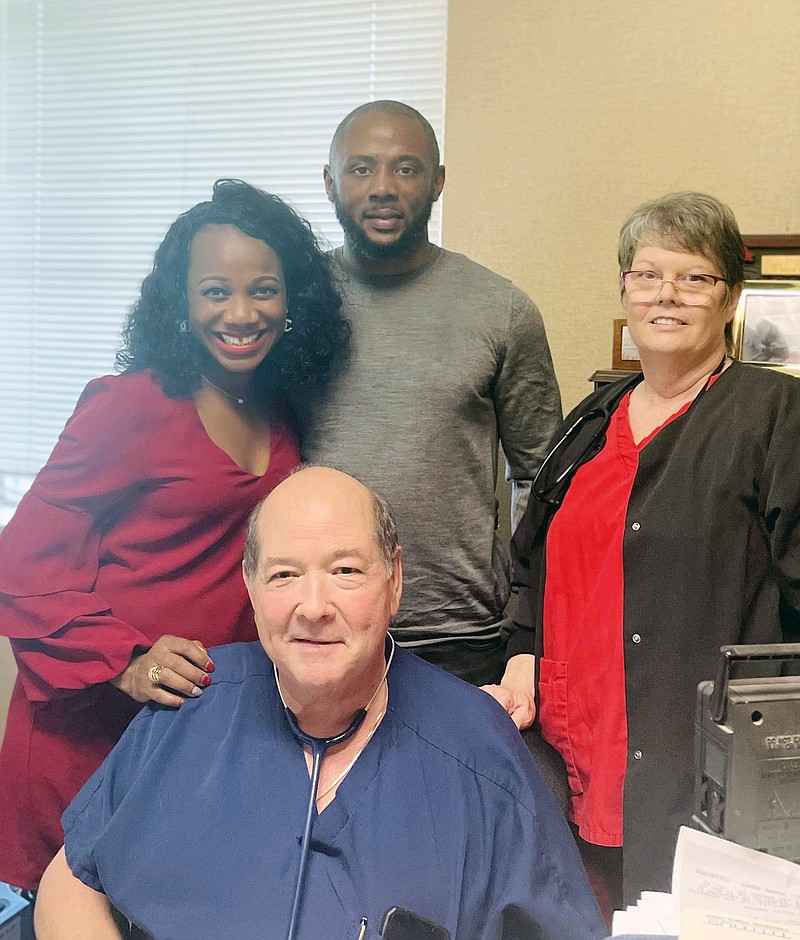 Harper announced in a letter to the editor, which published in the News-Times on Sunday, Jan. 2, that he has sold his clinic to Drs Ezinne and Ugo Nwude.

Harper is a third-generation doctor, having followed in his father and grandfather's footsteps in joining the profession.

"There's been a Dr. Harper in Union County since, I think, 1894. My grandfather practiced in Junction City from, I guess, when he graduated until 1940 when he died, and my father practiced here from I guess 1935 with Dr. Cathey, Arley D. Cathey ... until he passed away in 1985," Harper said.

Like his dad, Harper attended the University of Arkansas for Medical Sciences (UAMS). He graduated medical school in 1983 and began his residency in El Dorado through the AHEC (Area Health Education Center) program. He later served as an AHEC professor for four years.

"I enjoyed sciences and I enjoyed taking care of people, had empathy for people. It kind of worked out together," he said, explaining what drew him to the field of medicine.

Now, Harper is nearing 70, and he's decided it's time to follow up on some long-held plans.

Harper said he plans to stay in El Dorado after his retirement, which will begin on Monday, Jan. 10, when Dr. Ezinne Nwude will become the primary physician at the West Oak Street clinic.

"When I was in the hospital, she treated me," Harper said. "She's very nice and she provided excellent care, I thought."

The Nwudes moved to El Dorado in July, 2014. They have three children, two of whom attend public school in the El Dorado School District.

The couple recently lost jobs they held at Medical Center of South Arkansas -- Ezinne Nwude was a hospitalist and the chief of staff, and Ugo Nwude was the director of the hospital's emergency department -- following a change in the staffing agency the hospital contracts with.

Ezinne Nwude was planning to start working at a hospital in Louisiana -- she just completed the process of earning her medical license for the state last month -- when the opportunity to purchase Dr. Harper's clinic arose.

"We had indicated to (Harper) that we were actually looking for a building, but he got back to us and pretty much told me that he would like me to take over his practice, so it changed everything for me," she said. "I'd been having to travel to another town for work and I've always wanted to be in town and serve our community... I'm really, really excited that he trusted my husband and I to take over patients he's been seeing for the last four decades. It's humbling."

"We're going to be focused on quality patient care and preventative care," Ugo Nwude said. "We opened the Urgent Care clinic in 2015 and we've served the community since then, and we just want to continue that in a different capacity."

Ezinne Nwude said that all of Harper's current patients will still be considered patients if they want to be once the clinic's ownership transfers to her. She will also start accepting new patients immediately, she said.

"It's going to be pretty much the same for current patients -- same phone number they need to call and schedule appointments, some of the same faces. Dr. Harper's employees are staying behind to help us transition," she said. "(New patients) will have to call and we'll go through each request, but they have that same number too."

The building the clinic is located in was built by Harper's father in 1948. Retiring, and closing the book on his family practice, doesn't come easy, he said.

"(My patients) are all my friends and I love them dearly and I'm going to miss them, but I think this is the best thing for me right now," Harper said.

Ezinne Nwude said it's important to her to carry on Harper's legacy.

"We really hope to continue the tradition of excellent care that he's provided to his patients. They're very loyal to him and love him very much," she said. "I want to work hard on preventative medicine, which will be different for me career-wise, because I've always done acute care (in hospital settings), but in primary care, I'll focus more on preventative care and keeping people healthy so they don't get so sick they need to go to the hospital... That will be my goal, to keep the community healthy."

She said she also plans to keep in close contact with other primary care physicians in the community and build relationships with those doctors alongside her patients.

Ugo Nwude won't serve as a physician at the clinic, the couple said, noting that plans could possibly change in the future. He said for now he's glad to be supporting his wife in her career shift.

"She's going to be there full-time. She's going to be the face (patients) are going to see all the time. Everyone should feel comfortable seeing her and having her as their primary care doctor," he said. "We are really thankful to this community for their support for us as physicians over the last seven years and we are very optimistic to serve them in this capacity."

Ezinne Nwude said she's grateful that Harper trusted her to take over his clinic, and that she's looking forward to serving.

"It's honestly humbling and exciting, because this is a huge, huge blessing that we did not see coming, and to be given an opportunity to serve our community in this capacity, that's really humbling. I'm excited that we are going to be here doing what we do best," she said.

The couple is also planning to hold a grand opening for their new clinic in the coming weeks, but to start out, Ezinne Nwude said she plans to focus on meeting her new patients.

"Hopefully before the end of January or in early February we'll plan to do a grand opening, but now I'm trying to focus on this new transition and seeing the new patients. That will come in the next few weeks," she said. "We'll start seeing patients before we do that."

Harper's last day at the clinic will be Friday, Jan. 7. Ezinne Nwude will begin seeing patients on Monday, Jan. 10.