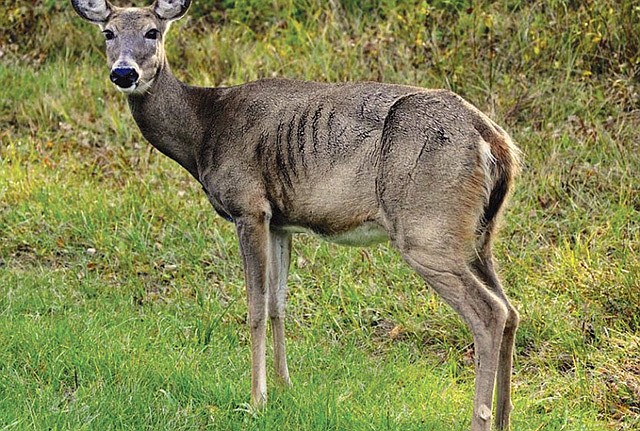 A deer with CWD is seen in this file photo.

The Arkansas Game and Fish Commission announced Friday that chronic wasting disease (CWD) has been identified in a deer in Randolph County, the first case in the state's northeast corner.

Crawford, Franklin and Van Buren are already in the agency's 21-county CWD Management Zone in Northwest and north-central Arkansas. They adjoin counties where the disease has been discovered earlier.

Arkansas Game and Fish Commission Director Austin Booth said the agency will evaluate any expansion of the CWD Management Zone and regulations concerning deer hunting after the current hunting season ends in February, according to the statement.

The Game and Fish Commission also is placing more drop-off containers in Randolph for free deer testing and is contacting the Missouri Department of Conservation. The hunters who killed the deer in all four counties have been notified.

Hunters who wish to have their deer tested for CWD can voluntarily take the head, with 6 inches of neck still attached, to one of the agency's network of participating taxidermists to have a sample tested for free, according to Game and Fish. They also may drop off the head at one of more than more than 100 CWD-testing collection stations positioned throughout the state.

More information about the cases, by county, includes:

• Randolph -- An 11-point buck killed Nov. 14, near Dalton. The deer was located about 25 miles from the closest known case, in Missouri's Oregon County, according to Game and Fish spokesman Spencer Griffith. The nearest Arkansas case, in Independence County, was more than 55 miles away.

The positive tests mean the neurological disease in deer, elk and their cousins has been found in 19 Arkansas counties. The most recent discovery before Friday's announcement was a case in Union County -- also outside the CWD Management Zone -- announced Dec. 2.