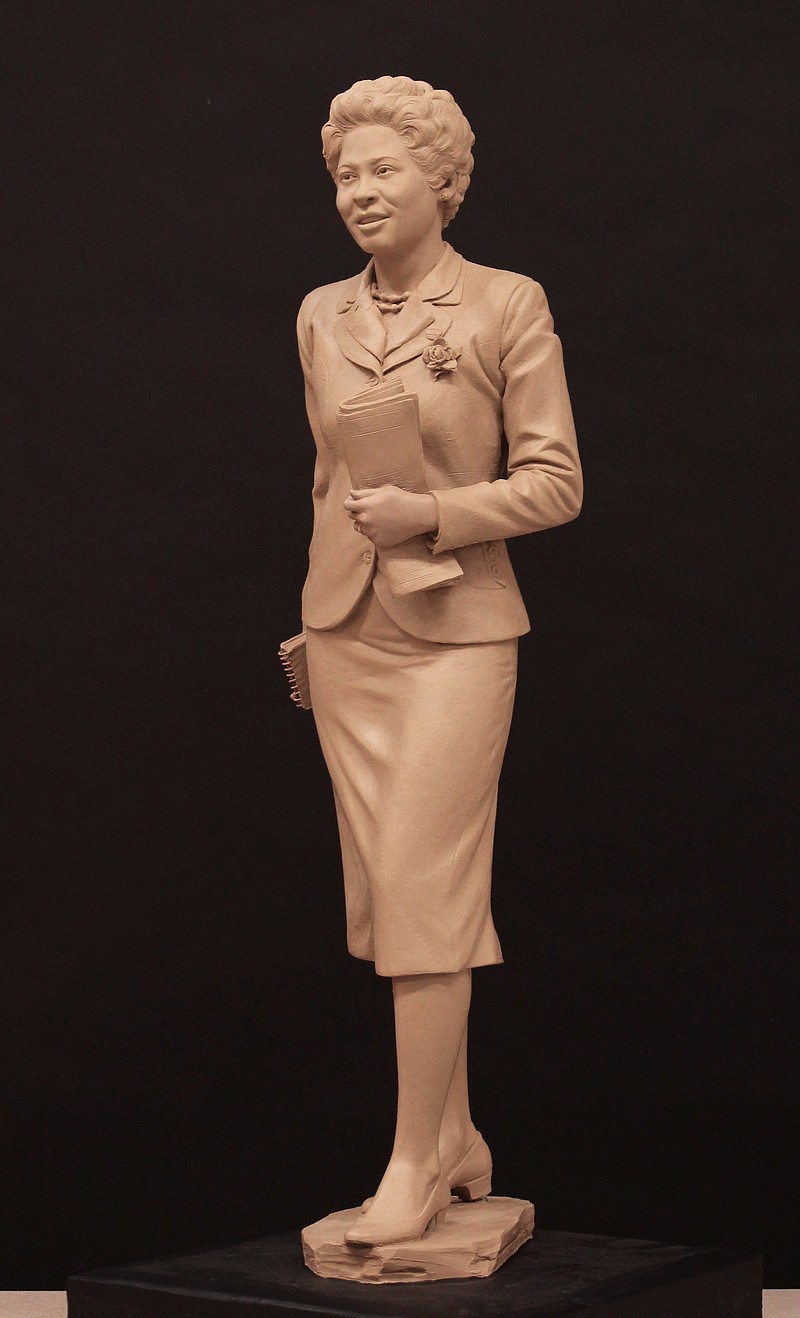 The Arkansas Secretary of State's office has submitted photos of the statues of civil rights leader Daisy Bates and country music icon Johnny Cash to the Architect of the Capitol for approval, which officials hope will come in the new year.

Under Arkansas' Act 1068 of 2019, the state is in the process of replacing the two statues that have represented it in the U.S. Capitol for the past century.

In June, Little Rock artist Kevin Kresse was chosen to construct Cash's likeness and Benjamin Victor of Boise, Idaho, was chosen to sculpt Bates'. Both sculptors have constructed 3-foot-tall clay scale models, or maquettes, of their subjects, and lately, much of the process has focused on minor adjustments and details that will be added once the full-size versions are constructed.

Victor's model shows Bates stepping forward with a newspaper in one hand and a reporter's notebook in another. Bates was a co-publisher of the Arkansas State Press, a newspaper dedicated to advocating for civil rights for African Americans, and a mentor to the nine students who integrated Little Rock Central High School in 1957.

Cash is depicted wearing a long overcoat over a shirt with a ruffled collar and sleeves, carrying his guitar over one shoulder and holding a Bible in his right hand. Cash was born in Kingsland and grew up in Dyess.

Kurt Naumann, director of administration and government relations for the Secretary of State John Thurston, said Monday that the office submitted photos of the Bates model on Nov. 10 to the Architect of the Capitol, who submitted them to the Joint Committee of Congress on the Library, which is reviewing them. The committee oversees management of the National Statuary Hall Collection, among other things.

Naumann said in an email that the secretary of state's office had submitted photos of the Cash model to the Architect of the Capitol on Nov. 19 and received a few comments about strengthening and adjusting the positioning of the neck of Cash's guitar "to ensure that it will not be damaged by folks who may reach up to touch it."

He added that Kresse has been communicating directly with the Architect of the Capitol's office about potential subtle changes he can make.

Approval of the maquettes is the first of three approvals that the statues must receive from the Architect of the Capitol, according to guidelines posted online. The state must then gain approval for a full-size clay model, then of the completed statue, which will be cast in bronze. After that, a dedication ceremony will be scheduled in Washington, D.C.

Naumann said he is hopeful that the process will be completed by the end of 2022, assuming there aren't any hiccups.

Arkansas is one of several states who are in the process of replacing their statues in the U.S. Capitol. Others include North Carolina and Florida. The most recent state to complete the process was Nebraska, which substituted William Jennings Bryan for Chief Standing Bear in September 2019. Coincidentally, that statue was also sculpted by Victor, who is the only living artist to have three works in the National Statuary Hall, according to his website.

Another part of the process that will take place in 2022 is deciding where the current statues representing Arkansas in the U.S. Capitol will go.

In 1864, Congress invited each state to submit up to two bronze or marble statues to be placed in Statuary Hall, and they now occupy other areas in the U.S. Capitol as well. A statue of the late attorney Uriah Rose was placed in 1917, and a likeness of the late U.S. Sen. and Gov. James P. Clarke was placed in 1921.

Rose was a secessionist and Clarke advocated for white-civilization preservation. The statues' historical and artistic significance are mixed with controversy, and officials have to weigh in both when selecting a final home for them, Naumann said.

He said officials haven't yet decided where the statues will go, but will be in communication with the Rose Law Firm, which bear's Rose's name, and with state Sen. Clarke Tucker, D-Little Rock, who is a descendant of Clarke.

In a 2018 guest column for the Arkansas Times, Tucker said that he and his family had become aware of a statement that Clarke made when he was running for governor in 1894 about the people of the South looking to the Democratic Party "to preserve the white standards of civilization." Tucker said he and his family condemned that statement and that he supported new statues in the U.S. Capitol.

Act 1068 came with an unfunded appropriation of $750,000 for the effort. The legislation requires the Arkansas secretary of state to receive funds for the design, completion, transport and display of the statues.

The Foundation for Arkansas Heritage and History, a nonprofit that supports the state Division of Arkansas Heritage, is acting as a repository for private charitable gifts to fund the cost of designing and creating the statues. The nonprofit will turn those donations over to the secretary of state's office.

Stacy Hurst, secretary of the state Department of Parks, Heritage and Tourism, said in an email Monday that the total raised for the project was $766,887, as well as an additional $60,000 in pledges.

Over the last few months, the state's National Statuary Hall Steering Committee has worked through tweaks to the designs of the models.

At the most recent meeting in November, members of the advisory panel met via video call with Victor and Kresse to go over small changes they had made to the models or would make to the final version.

Victor said Bates' shoes will have a higher, thinner heel in the final version than they do in the maquette, and the newspaper she is holding will look like the actual page of an edition of the Arkansas State Press.

"The letters would only be a millimeter tall on this scale," Victor said. "As long as we provide what we're going to ask for approval on on that newspaper, they won't critique the small-scale for that. It won't work to inscribe it on the little scale anyway."

Kresse had made changes to Cash's face and stance.

"It was just feeling overall more like him," Kresse said.

He added that he had gotten a 3D scan of a larger bust that he had made of Cash, which had helped.

"Sculpting a small face is a lot more difficult than sculpting a large one," he said.

The steering committee voted unanimously to send both models on for approval. 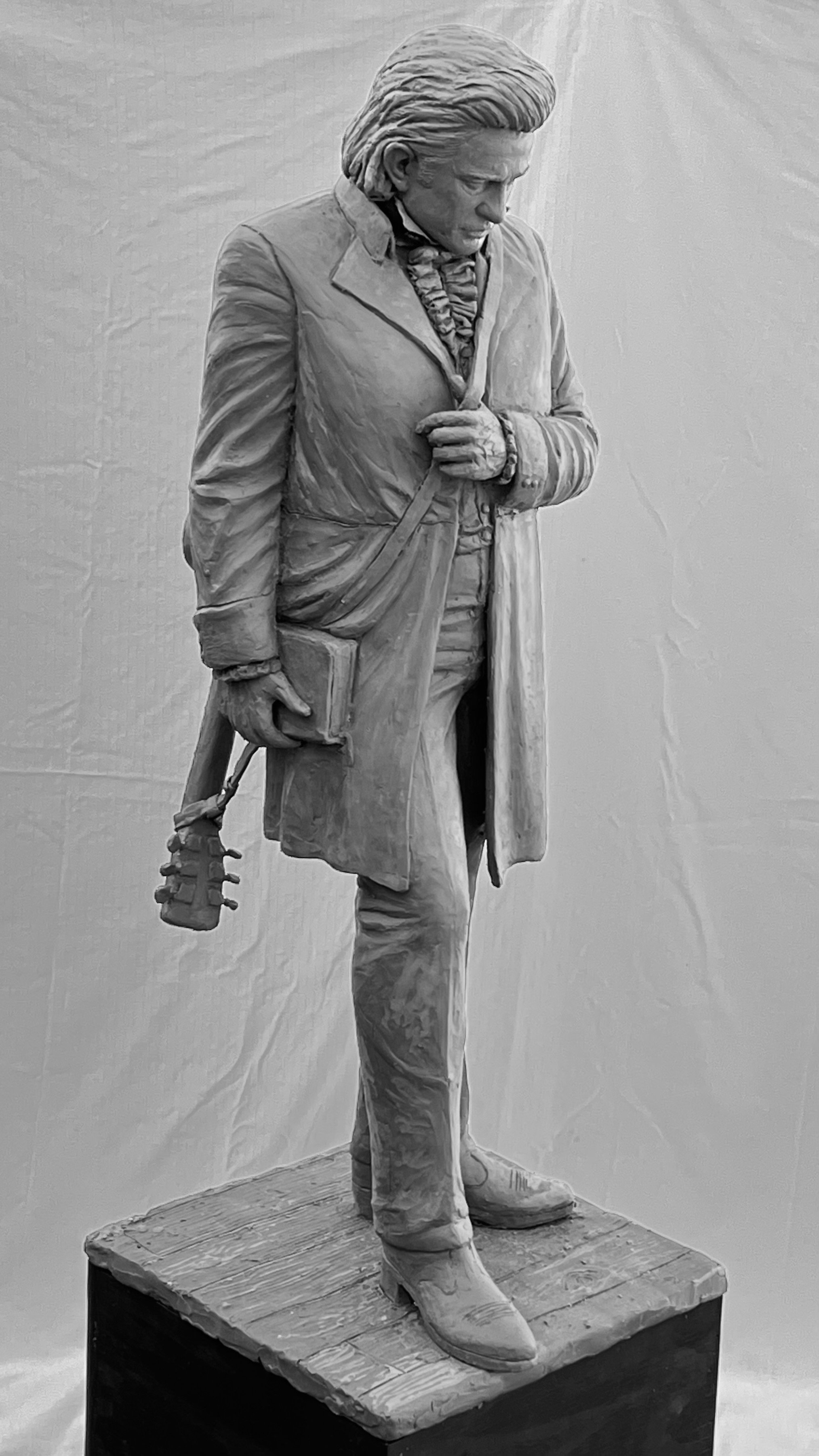