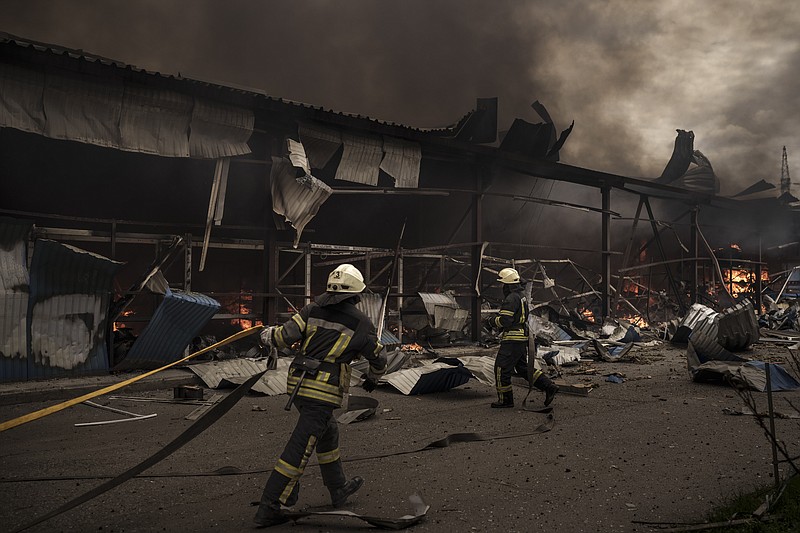 Firefighters work to extinguish a fire on a warehouse amid Russian bombardments in Kharkiv, Ukraine, Saturday, April 23, 2022. (AP Photo/Felipe Dana)

Meanwhile, two fires were reported at oil facilities in western Russia, not far from the Ukrainian border. It was not clear what caused the blazes.

As both sides in the 2-month-old war brace for what could be a grinding battle of attrition in the country's eastern industrial heartland, top U.S. officials pledged more help to ensure Ukraine prevails.

In a bold visit to Kyiv to meet with President Volodymyr Zelenskyy on Sunday, the American secretaries of state and defense said Washington had approved a $165 million sale of ammunition -- non-U.S. ammo, mainly if not entirely to fit Ukraine's Soviet-era weapons -- along with more than $300 million in financing to buy more supplies.

U.S. Secretary of State Antony Blinken said Monday after the meeting that the West's united support for Ukraine and pressure on Moscow are having "real results."

"When it comes to Russia's war aims, Russia is failing. Ukraine is succeeding," he added.

Russian President Vladimir Putin accused the U.S. and its allies of trying to "split Russian society and to destroy Russia from within."

Moscow says its goal is to capture the mostly Russian-speaking Donbas region in the east. While both sides said the campaign in the east is underway, Russia has yet to mount an all-out ground offensive and has not achieved any major breakthroughs.

Ukrainian troops holed up in a steel plant in the strategic city of Mariupol are tying down Russian forces and apparently keeping them from being added to the offensive elsewhere in the Donbas.

Britain said it believes 15,000 Russian troops have been killed in Ukraine since Moscow began its invasion. Defense Secretary Ben Wallace said 25% of the Russian combat units sent to Ukraine "have been rendered not combat effective," and Russia had lost more than 2,000 armored vehicles and over 60 helicopters and fighter planes.

Ukrainian officials have said about 2,500 to 3,000 Ukrainian troops had been killed as of mid-April.

Over the weekend, Russian forces launched new airstrikes on the steel plant in a bid to dislodge the estimated 2,000 fighters. Some 1,000 civilians were also sheltering in the steelworks, and the Russian military pledged to open a humanitarian corridor Monday for them to leave.

The Russian offer was met with skepticism by Ukraine. Deputy Prime Minister Iryna Vereshchuk said on the Telegram messaging app that Ukraine does not consider the route safe and added that Russia had breached agreements on similar evacuation routes before. She called on the United Nations to oversee an evacuation.

On Monday, Russia focused its firepower outside of Maruipol, with missiles and war planes striking far behind the front lines, in an apparent bid to slow the movement of Ukrainian supplies toward the east and disrupt the flow of fuel needed by the country's forces.

Oleksandr Kamyshin, the head of the state-run Ukrainian Railways, said five railway facilities in central and western Ukraine were hit early Monday. That included a missile attack near the western city of Lviv.

Ukrainian authorities said that at least five people were killed by Russian strikes in the central Vynnytsia region.

Phillips P. O'Brien, professor of strategic studies at the University of St. Andrews, said the war is, for now, settling into a campaign of incremental battlefield losses and gains.

"The two sides are sort of every day weakening each other," he said. "So it's a question of what can you bring in that's new" and "what can you destroy on the other side."

Meanwhile, a major fire erupted early Monday at an oil depot in a Russian city about 100 kilometers (60 miles) from the Ukrainian border, Russia's Emergencies Ministry said. No cause was given for the blaze. Photos showed a huge, churning plume of thick smoke.

The oil depot in Bryansk is owned by a subsidiary of the Russian state company Transneft, which operates the Druzhba pipeline that carries crude west to other European countries. The ministry said the blaze damaged a depot containing diesel fuel. It said the region has enough diesel for 15 days.

It wasn't clear if the depot was part of the pipeline infrastructure, but Polish pipelines operator PERN said deliveries to Poland have not been affected.

In a video address Monday, Zelenskyy described his meeting with Blinken and U.S. Defense Secretary Lloyd Austin as "encouraging and, importantly, effective."

The Ukrainian leader added that they agreed "on further steps to strengthen the armed forces of Ukraine and meet all the priority needs of our army."

With Russia's shift toward the Donbas, Zelenskyy is now focused on more heavy weaponry, such as tanks and artillery.

"We want to see Ukraine remain a sovereign country, a democratic country able to protect its sovereign territory," Austin said. "We want to see Russia weakened to the point where it can't do things like invade Ukraine."

In a boost for Ukraine, French President Emmanuel Macron comfortably won a second term Sunday over far-right challenger Marine Le Pen, who had pledged to loosen France's ties to the European Union and NATO.

Le Pen had spoken out against EU sanctions on Russian energy and had faced scrutiny during the campaign over her previous friendliness with the Kremlin. 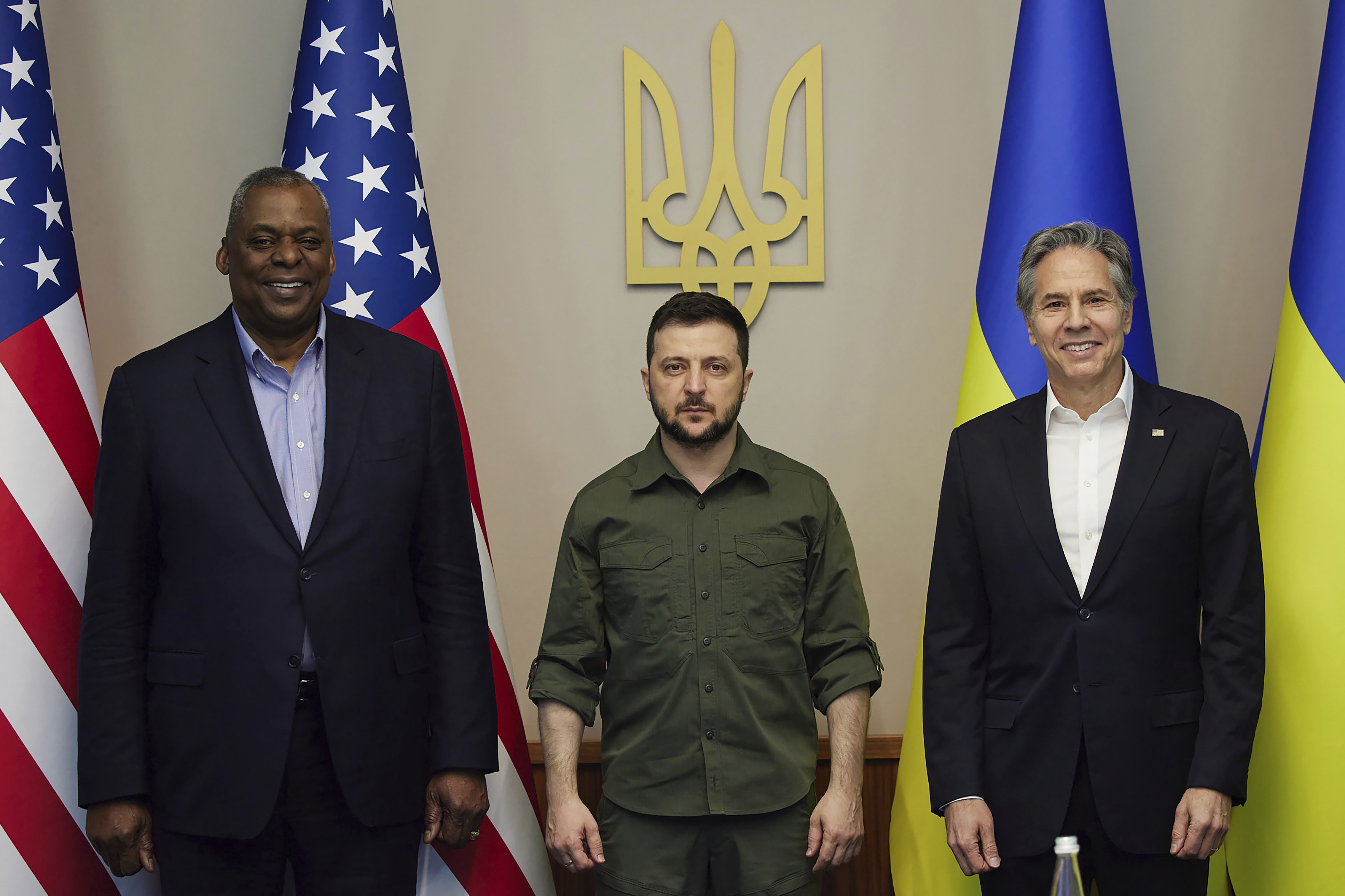