Hutchinson weighing presidential run; no decision until after November 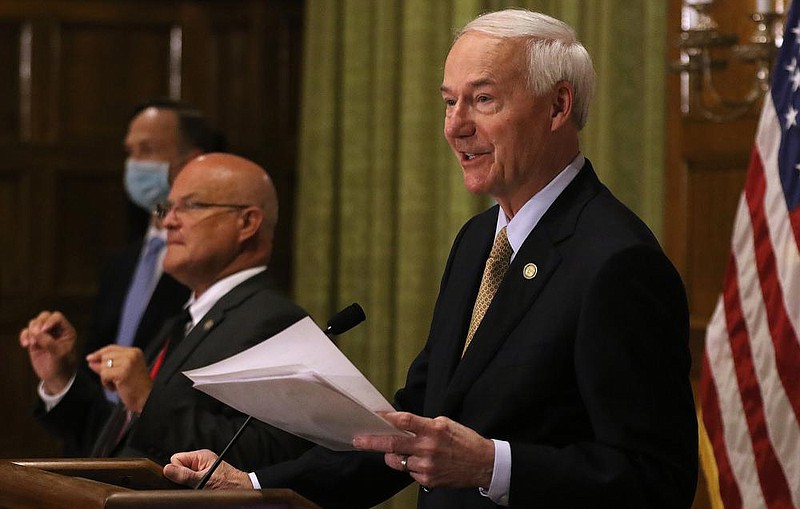 Gov. Asa Hutchinson speaks at an update on COVID-19 in this Arkansas Democrat-Gazette file photo.

As Arkansas Gov. Asa Hutchinson continues to make moves that steer him toward a presidential run in 2024, he said in a Fox News interview Sunday that he is not ruling out a run, but later told media that he's still undecided.

"Right now, I want to be a leading voice for a new direction for our party and our country," Hutchinson said in a prepared statement sent to the Arkansas Democrat-Gazette. "I'm not ruling out a presidential run."

"That's something that is a consideration, an option because this is too critical a time for our nation and it's a defining moment and I want to not only engage the debate now but keep my options open down the road," he said while preparing for a trip to New Hampshire, a key political location often needed by presidential candidates early in the race.

Hutchinson, in his last year of office as the governor, said his decision will be made after the November midterm elections.

" People always have choices," Hutchinson told Fox News. "But whenever you are, what, three years out from that time, let's have a lot voices out there that can talk to the Republican base. Talk about ideas. Talk about the future and that's what I want to shift the debate to."

In recent weeks, Hutchinson has made several comments that he diverges some from President Donald Trump and that he wants to give the Republican base another political option.

His focus is on leading the state, he said in his Sunday statement.

"I want to finish my last year as governor strong and accomplish more under my W.I.N.S. in 2022 focus," Hutchinson said in the statement.

Hutchinson's W.I.N.S. plan stands for and focuses on workforce development, infrastructure, new economy jobs and strengthening Arkansas families, according to his office.

On Monday, he planned to speak at a New Hampshire political event held by The New England Council.

Hutchinson said Friday that over the course of the next three to four months, he will be traveling to different states, but Arkansas taxpayers won't be paying for it. Instead, his national platform organization will cover some trips.